Does Vishnu serve & worship Shiva only using the Agamas?

After Shiva's complete supremacy was established during the Fiery Linga incident shortly after creation, Shiva instructed Vishnu & Brahma to worship him using the Agamas and they obeyed well. From Skanda Purana 1.3b.16 :-

Śrī Śiva/Mahādeva said: Remember me, your sire ... O gentle ones, what is proper has been spoken (i.e. asked by you). It has been desired by me (to say) also. You two deserve to worship me by the method described in the Kāmika (Āgama). 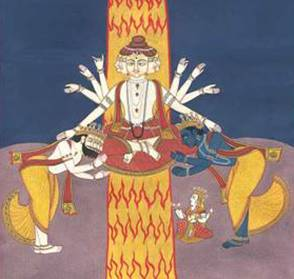 Nandīśa said: Viṣṇu and Brahmā wore matted hair and applied sacred ash over their bodies ... Conversant with the esoteric doctrines of all the Āgamas, they duly performed all the rites

Are there other methods used by Vishnu? Did Lord Raam also worship Shiva as per Agamas?

48
Is the ultimate purpose of life only to serve God?
8
Can you worship an idol of Shiva?
4
Lord Shiva and Lord Vishnu
2
Bhagwan Shiva worship