How to reconcile Rama's Vishwaroopa, Upanishads and Krishna saying he is Rama only among warriors?

Lord Rama is often known as the supreme being according to Vaishnavism. This is evidenced by many scriptural refereces:

Shiva says "When that Supreme being of Vedas born as son of Dasratha (Śrī Rām) in Ayodhya, that time all Vedas manifested themselves through the mouth of sage Valmiki..... directly as Ramayana. Therefore .... there is no doubt that Sri Ramayana is the Vedas itself" (Mangalacharan of Valmiki Ramayana; & Agastya samhita)

Rama is Para-Brahma and supreme austerity, and Rama is the Supreme Essence and Brahma Taraka. (Rama Rahasya Upanishad 1.6)

His Vishwaroopa is discussed in Adbudh Ramayan, Sri Ramcharitmanas 1.202.1,2 and even in the Mahabharata:

“Behold me now in my native form: I give thee sight.' Then Rama of Bhrigu's race beheld in the body of Dasaratha's son the Adityas with the Vasus, the Rudras, the Sadhyas with the Marutas, the Pitris, Hutasana, the stellar constellations and the planets, the Gandharvas, the Rakshasas, the Yakshas, the Rivers, the tirthas, those eternal Rishis identified with Brahma and called the Valkhilyas, the celestial Rishis, the Seas and Mountains, the Vedas with the Upanishads and Vashats and the sacrifices, the Samans in their living form, the Science of weapons, O Bharata, and the Clouds with rain and lightning, O Yudhishthira! And the illustrious Vishnu then shot that shaft.” (Mahabharata, Vanaparva, Tirthyatra Parva, section XCIX) 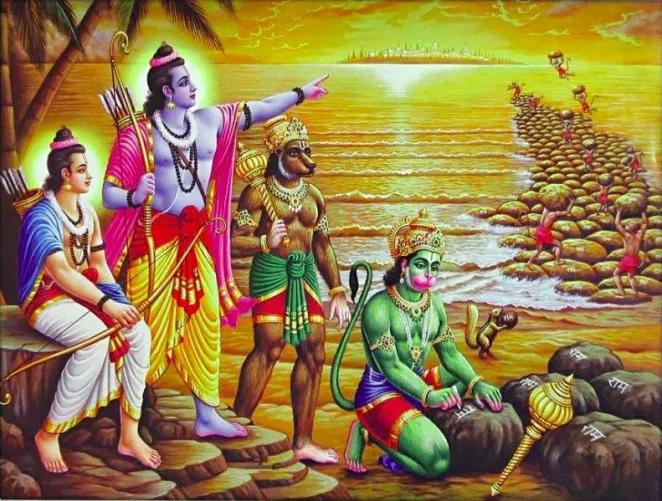 But Bhagavad Gita 11.47 says his Vishwaroop is being shown for first time ever !! And then we see in Bhagavad Gita that Krishna says that he is only Rama among warriors and Rama is mentioned along with lion, Garuda, Prahlada, wind and Ganges!! Like he is almost degrading Rama to just a warrior and a small portion of himself:

How can Krishna's words and everything else be reconciled? Even in Krishna Upanishad Rama tells that he will reincarnate as Krishna.

Can these 2 different parts (Vishwaroop & warrior part) be considered interpolations in Bhagavad Gita? EDIT - It seems there is an interpolation in B Gita 10.37 (based on answer) because it says Vrishinam in one version and Yadavam in another!

And then we see in Bhagavad Gita that Krishna says that he is only Rama among warriors and Rama is mentioned along with lion, Garuda, Prahlada, wind and Ganges!! Like he is almost degrading Rama to just a warrior and a small portion of himself

This is not degradation. In this chapter, Krishna is giving Brahman's divine manifestations (दिव्य विभूतियाँ). In BG 10.37, he gives his own name too:

10.37 Vrsninam, of the Vrsnis, [Here Ast. adds yadavanam, of the Yadavas.-Tr.] I am Vasudeva- I who am this person, your friend. ~ English Translation Of Sri Shankaracharya's Sanskrit Commentary By Swami Gambirananda

10.37. Of the Vrsnis (the members of the Vrsni clan), I am the son of Vasudeva; ~ English Translation By By Dr. S. Sankaranarayan

10.37 I am Shri Krishna among the Vrishni-clan ~ English Translation by Shri Purohit Swami

So by this shloka, should one conclude that Krishna is just a Yadava / Vrishni like you concluded Rama is just a warrior? No, this is not the right interpretation. To interpret correctly, one has to read the entire chapter at least.

Not the answer you're looking for? Browse other questions tagged mahabharata krishna ramayana rama upanishads .

6
Why did Vishwamitra approach only Lord Rama to kill Mareecha and Subaahu?
14
Krishna said in Bhagawad Gita that He is Rama among the weapon wielders. Whom was He referring to Rama (or) Parasurama?
8
Who eliminated Manmatha - Lord Indra?
7
Did Rama have multiple wives?
7
Is 'Janani Janmabhumischa Swargadapi Gariyasi' wrongly attributed to Rama? Is it even part of Valmiki Ramayana?
11
Where is it mentioned that Krishna and Rama Worshipped Shiva Lingam?
4
How to understand these words of Rama regarding Sita?
6
Does Mahabharata say anywhere that sun is parabrahman