What is the Dharma of outcaste people?

And all varnas have different duties(dharma) to discharge.

So, what is the dharma prescribed for outcastes who don't come under the four varnas .

The theory of the early smṛtis was that there were only four varṇas and there was no fifth varṇa. Vide Manu X.4 and Anuśāsana-parva 47.18.890. When in modern times the so-called untouchables are referred to as the pañcamas that is something against the smṛti tradition. Panini II 4.10 and Patañjali say that a Samāhāra dvandva compound can be formed from several subdivisions of śūdras that are not niravasita e.g. we can have the compound ‘taksāyaskāram’ meaning carpenters and blacksmiths, but not 'caṇḍāla-mṛtapam’ because caṇḍālas and mṛtapas are niravasita Śūdras (and so the compound will be 'caṇḍālamṛtapāḥ). Therefore it follows that Panini and Patañjali included caṇḍalas and mṛtapas among śūdras. When Angiras (note 171 above) includes kṣatr, suta, vaidehika, magadha and ayogava (that are pratiloma castes) among antyavasayins along with caṇḍāla and śvapaca, he makes it clear that he regarded caṇḍalas as included among śūdras, for Manu X.41 declares that all pratiloma castes are similar to śūdras in their dharma and because the śāntiparva 297.2S 393 expressly says that the vaidehika is called Śūdra by learned dvijas.

Those sons however who are born of ‘violation’—i.e., of a mixture of the castes—‘are of the nature of Śūdras,’—i.e., having the character of the Śūdra, they are entitled to the rights and duties of that caste.

This implies that Chandalas and all other Pratilomas can do the works of Sudras. In Mahabharata Anushasana Parva 48, Jobs are allocated based on Varna of their parents which is presented in the table as follows - 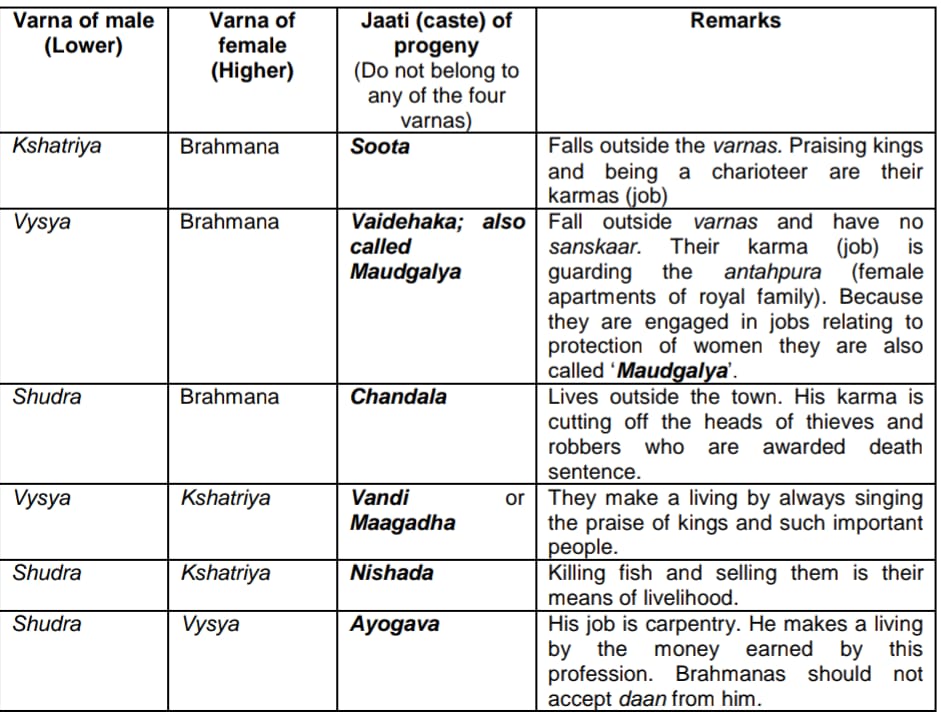 The duties have been laid down in the scriptures for only the four principal orders. As regards the others the scriptures are entirely silent. Among all the orders, the members of those castes that have no duties assigned to them by the scriptures, need have no fears as to what they do (to earn their livelihood). Having recourse to spots where four roads meet, or crematoria, or hills and mountains, or forests and trees, they build their habitations there. They may be seen to live in this way, adorning their persons with ornaments and employed in the task of manufacturing diverse kinds of domestic and other utensils. Without doubt, by assisting kine and Brahmanas, and practising the virtues of abstention from cruelty, compassion, truthfulness of speech, and forgiveness, and, if need be, by preserving others by laying down their very lives, persons of the mixed castes may achieve success. (Anushasana Parva 48 : 4 )

But the dwellings of ‘Fierce’ Untouchables (Candalas) and ‘Dog-cookers’ (Svapacas) should be outside the village; they must use discarded bowls, and dogs and donkeys should be their wealth. (10.51)

Their clothing should be the clothes of the dead, and their food should be in broken dishes; their ornaments should be made of black iron, and they should wander constantly. (10.52)

Not the answer you're looking for? Browse other questions tagged vedas caste-system manu-smriti mahabharat .

2
What will be the Varna of a child born from a Brahmin man and Shudra woman?

6
What caste are foreigners?
4
On verses, from major Hindu texts, similar in purport to those found in the Bhagawat Gita
2
Identifying Varnas based on scriptural sources
5
Which varnas do they belong to?
7
What does the Bhagavad Gita mean when it says caste is based on Gunas? Does it mean trained, external behavior, or genetic predisposition?
4
Are Varna and Caste same or different?