Do people who attain Moksha have to be born again in next cycle of Universe?

No, the Moksha state is independent of time.

One who aspires to overcome the thick darkness of ignorance should never seek contacts that are contrary to the fourfold end of life (Dharma, Artha, Kama and Moksha). Of these four ends, Moksha alone is accepted as the really stable value to be sought; for the other three are subject to the destructive force of Time.

Those who have crossed my Maya which is of universal forms, attain the great and pure Nirvana (moksha) along with me.

They have no return (to samsara) even in hundreds and crores of kalpas, thanks to my favor. O leading Yogins, this is the injunction of the Vedas.

Moksha is like drop of water getting back to the ocean. Is it possible to take that exact drop of water out of ocean again? No. Once an Aatman attains Moksha, It merges with it's parent Brahma and there is no turning back.

‘Bhrigu the well known son of Varuna Deva approached his father Varuna with a formal request: ‘ Teach me Brahman’ and Varuna replied: Food, Vital Energy, Eye, Ear, Mind, Speech- these are the aids to the Knowledge of Brahman. To Bhrigu Varuna Deva replied: Brahman is that which all these things take birth from, live after being born, towards which they move and merge into. Then Bhrigu practised ‘Tapasya’ or extreme concentration to Brahma!

However, I believe confusion may rise due to rebirth of entities of this universe again and again. There is always a Vishnu, A Brahma, A Krishna, A Ram, A Shiva, A Sati... An Indra, A Ravan, A Vashishtha and a Brihaspati etc. Many of these entities take birth in cycle of Yugas, Maha Yugas, Kalpa and Maha Kalpa. But important thing is they are "not same" aatmans. These are mere "posts" which are assumed essential to run this universe. In every cycle as relevant, these posts are filled with one or the other body.

Eg, Ram is born every Maha Yuga (cycle of Four Yugas). Is it Aatman of same Ram as that of previous Maha Yuga? No.

Hanuman is blessed with age till the end of Maha Yuga. Would same Hanuman take birth in next Maha Yuga? No. He will also be called Hanuman, but it will be a different Aatman.

In Bhagwatpuran, 8th skandh, 1st chapter, Sukhdev ji explains to Parikshit about many manvantaras and describes about Manu, Indra and other devtas in each of them. All of them are called by same post like Manu or Indra, but they are identified as different individuals. There are 14 manvantaras in a kalpa or day of Brahma, and each one of them will have their own set of Manu, Indra, Agni, Vayu and other devtas and rishis. 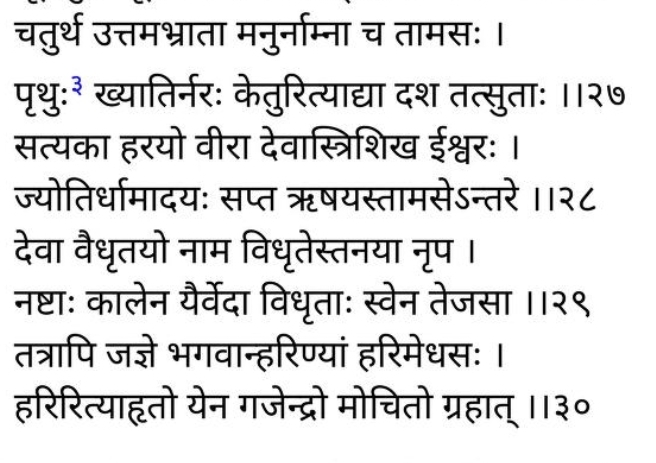 24
What is the life cycle of a soul (atma) in Hinduism?
10
What will the soul do after moksha?

8
Is Moksha (liberation) the highest attainable level for a jivā (soul)? Is there anything above Moksha?
7
What is (if any) the significance of Ignorance/Maya?
13
What will happen if all souls inhabiting Earth attain Moksha?
7
Why doesn't Lord Krishna give Moksha to everyone?
4
Beyond the manifestation of Time
5
Even the Moksha achieved after getting slayed by the Supreme Lord is Impermanent?
7
What's the point in striving for moksha?