Why Shri Ram permitted the burning of Lanka?

Why shri ram let the vanaras burnt the city of Lanka. My question arises because when Shri Ram and vanara get healed by sanjeevni and decided to continue battle, Sugriv ordered hanuman and other vanaras to set ablaze the city of Lanka. Many non-combatants died. As described in whole in this whole sarga: http://valmikiramayan.pcriot.com/utf8/yuddha/sarga75/yuddha_75_frame.htm

But during fight with Indrajeet when lakshman decided to use brahmastra which was capable of destroying not only Indrajeet but also whole race of demon, shri ram refrain lakshman from using it and said as:

Then, Rama spoke to that Lakshmana, who was endowed with auspicious bodily marks as follows: "You ought not to kill all the demons on earth, merely for the sake of a single demon."

Shri ram clearly says you should not kill one who is not fighting with you, then why he let vanaras burn the city, which will result in death of non-combatants.

The answer lies in Sarga 75 itself.

Sugriv orders attacking Lanka as it's primary warriors are dead. Ravan and Meghnad may not be sufficient to safeguard whole of Lanka. 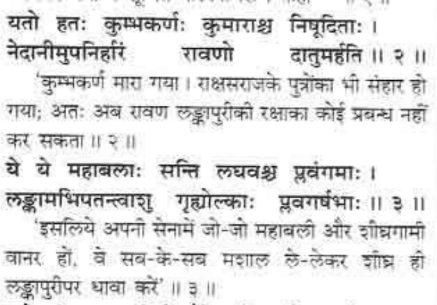 Please note that War in Lanka never stopped. Unlike Mahabharat, Lanka war continued day and night. In fact, war in night was beneficial to Rakshash as their powers became stronger. War between Lakshman and Meghnad, and Ram and Ravan also lasted many days and nights. 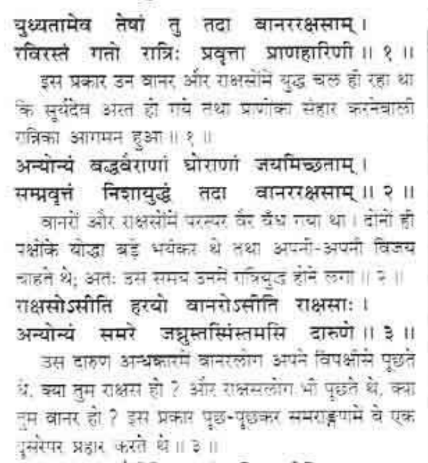 This is not the first time Lanka was burnt down. Hanuman had done pretty much the same thing just a month ago. Besides, this was bound to happen because Ravan had decided to fight by staying within the Fort of Lanka.

In fact, Shri Ram also joins the war along with Vanars against Rakshash. Hence, there is no question of Ram stopping Vanars for this act. 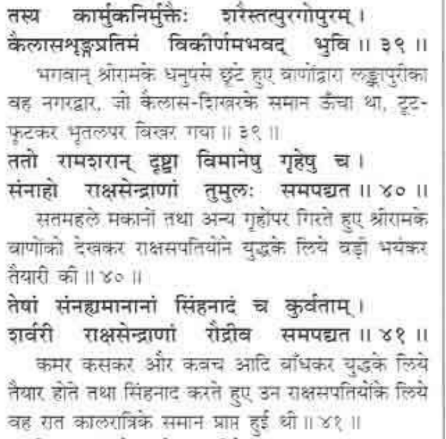 The 2nd shloka against misuse of Brahmastra is not comparable to this scenario. Ram is only stating the rules of using an Astra while fighting against a warrior. In any case, Ram had already taken oath to destroy the race of Rakshasha.

Not the answer you're looking for? Browse other questions tagged ramayana rama hanuman vanaras .

12
Was Ravana's Lanka not the present day Sri Lanka?
6
Why did Hanuman burn the city of Lanka?
6
Why did Rama construct bridge to Lanka?
1
Was Lord Ram under Maya's influence when he wanted to confirm if Shri Bharat still wishes to continue as King?