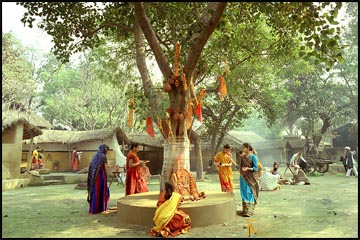 Why they do so? Is there any reason from Hindu scriptures behind doing that? As far as I know, people say that our ancestors' souls stay on those peepal trees, and hence we worship them. Is that explanation true, or is there some other reason behind rituals involving a peepal tree?

The Brahma Purana and the Padma Purana, relate how once, when the demons defeated the Gods, Vishnu hide in the peepal. Therefore spontaneous worship to Vishnu can be offered to a peepal without needing his image or temple. The Skanda Purana considers the peepal to be a symbol of Vishnu. Vishnue is said to have been born under a peepal tree. Some believe that the tree houses the Trimurti – the roots being Brahma; the trunk, Vishnu; and the leaves, Shiva. The Gods are said to hold their councils under this tree, and so the tree is associated with spiritual understanding.

The Skanda Purana states that the Sarasvati originates from the water pot of Brahma flows from Plaksa on the Himalayas. According to Vamana Purana 32.1-4, the Sarasvati was rising from the Plaksa tree (Pipal tree).

The peepal is also closely linked to Krishna. In the Bhagavad Gita, he says: "Among trees, I am the ashvattha." Krishna is believed to have died under this tree, after which the present Kali Yuga is said to have begun. And he will reside in a peepal leaf after Pralayam till the next world is created. 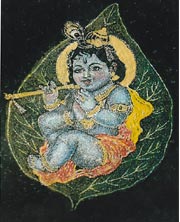 Lakshmi is also believed to inhabit the tree on Saturdays. Therefore it is considered auspicious to worship it. Women ask the tree to bless them with a son tying red thread or red cloth around its trunk or on its branches.

Not the answer you're looking for? Browse other questions tagged belief worship peepal-tree .

1
Good reason to plant Bodhi Tree (peepal) at home
2
Why do we worship ‘Tulsi’ plant and Peepal Tree?

8
What is Mangal Dosh (Mangalik)
11
Why one should worship God?
3
Why do Hindus worship vehicles on the day of Dussehra?
8
Why should not we touch Tulsi and Peepal trees on Sunday?
2
Worship of different gods by Hindus
6
Do any scriptures say that women must worship God instead of their husbands and become self-dependent?
3
Why do we worship Lord Hanuman on these weekdays?