Apparently, Garuda has been declared so in the Adi Parva of the Mahabharata.

Nandi, Hanuman and Adisesha have more or less the same status - are there scriptures in which they have been equated to Brahman?

Text 36: You exist in the beginning, middle and end of everything, from the most minute particle of the cosmic manifestation — the atom — to the gigantic universes and total material energy. Nonetheless, You are eternal, having no beginning, end or middle. You are perceived to exist in these three phases, and thus You are permanent. When the cosmic manifestation does not exist, You exist as the original potency.

Text 37: Every universe is covered by seven layers — earth, water, fire, air, sky, the total energy and false ego — each ten times greater than the previous one. There are innumerable universes besides this one, and although they are unlimitedly large, they move about like atoms in You. Therefore You are called unlimited [ananta]. 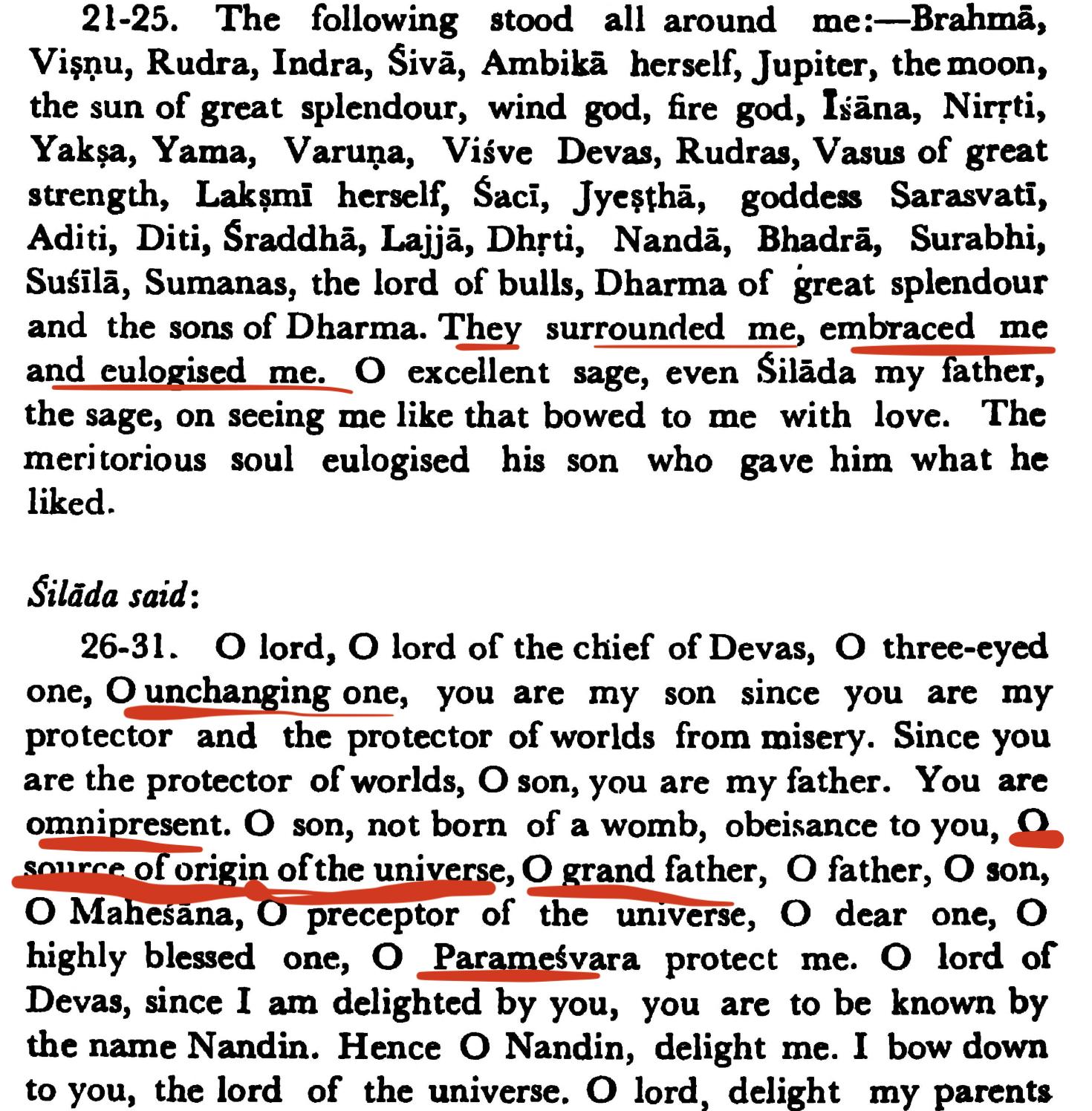 The foremost manifestation of Kṛṣṇa is Saṅkarṣaṇa, who is known as Ananta. He is the origin of all incarnations within this material world. Previous to the appearance of Lord Kṛṣṇa, this original Saṅkarṣaṇa will appear as Baladeva, just to please the Supreme Lord Kṛṣṇa in His transcendental pastimes.

Devi Bhagwatam. The devotees call Him by the name of Saṇakarṣaṇa, as He is the manifested emblem of “Aham” and the common ground where the Seer and the Seen blend into one. He is the thousand-headed Controller of all, moving and non-moving; He is of infinite forms; He is Śeṣa; this whole universe is being held as a mustard bean on His head; He is of the Nature Intelligence and Bliss and He is Self-manifest. When he wants to destroy all this during the Pralaya, the very powerful Saṅkarṣaṇa Rudra, well arrayed with the eleven Vyūhas, military (squadrons) arrangements, springs up from Him. From His Central Eyebrow, looking wide with His Three Eyes and raising His Trident, resplendent with three flames. All the (prominent) principal snakes, ruling over many others, come to Him during the nights filled with devotion and surrounded with Bhaktas (devotees) and bow down to Him with their heads bent low and look at each other’s faces, enlightened with the lights from the jewels shining with clear lustre, on the nails of the red toes of His Lotus-Feet. At that time their faces become brilliant with the rays emitting from the jewels on the top of their very gay encircled hoods; and their cheeks look beautiful and shining. The daughters of the Nāga Rāja also do like this; when very beautiful rays come out of their perfectly excellent bodies. Their arms are wide extended; they look very clear and they are beautifully white. They use always Sandalpaste, Aguru and Kāṣmīri unguents. Being overpowered by the amorous passion, due to their contact with those scented things, they look at Him with bashful glances and sweet smiles and expect Āsiss (benedictions) from Him. And then His eyes roll maddened with love and express signs of kindness and mercy. The Bhagavān Ananta Deva is of boundless strength; His attributes are infinite; He is the ocean of infinite qualities. He is the Ādi Deva, of a very good nature and His Nature is highly luminous. He has abandoned anger and envy and He wants the welfare of all. All the Devas worship Him and He is the repository of all Sāttvic qualities.

Not the answer you're looking for? Browse other questions tagged brahman hanuman adisesha nandi .

9
Did Shree Hanuman have a child from Raavana's daughter SuvannaMaccha?
8
What is the relation between Viraj, Hiranyagarbha, Brahma, and Saguna Brahman in Advaita terminology?
6
Who is the true Nagaraja, the King of Nagas?
15
What scriptures describe the origin of Arjuna's monkey flag?
14
What was the memory/rivalry of Ravana with Bali's son Bana?
7
Was there any fight between Bheeshma and Lord Hanuman being mentioned anywhere in Mahabharata?
1
Difference between saguna brahman and sakara brahman
2
Which Gods besides Vishnu have been declared as Supreme and/or Brahman in the Mahabharata?