Are there any scriptures available (or mention) that are related to GyanVapi mandir?

Shivling has been found in Gyanvapi, Varanasi of Uttar Pradesh, and the supreme court today ordered to seal the area

The Supreme Court Tuesday asked the Varanasi District Magistrate to protect the area where the ‘shivling’ was found without impeding the right of Muslims to enter and worship. The court will hear the matter again on May 19.

The name GyanVapi also appears to be from Sanskrit and belongs to the Sanathan dharma. I read some articles stating that Nandi is facing the Shivling. We know that Nandi generally faces lord Siva in temples. So, people are believing that the Shivlinga found today is the actual linga of Varanasi.

In this context, I want to know whether any scriptures contain about (or mention the word) GyanVapi? If not, is it of Historic origin? And are there any scriptures telling about the GyanVapi mandir that do exist before the construction of the masjid?

scripture shiva history temple varanasi
Share
Improve this question
edited May 17 at 18:54
hanugm
asked May 17 at 13:47

Description of Jñānavāpī (Gyanvapi) or Jñānodatīrtha, and its mahatmya is extensively mentioned in many chapters of Kāśī Khanda of Skanda Purana.

In one of the early Satya Yugas, Īśāna was roaming on Earth and found scarcity of water. After reaching Kāśī and seeing Swayambhu Viśveśvara Linga, desire of bathing linga in cool waters came to his mind and dug a well. This well is known as Jñānodatīrtha. This is how Chapter 33, Pūrvārdha of Kāśī Khanda describes this.

चखान च त्रिशूलेन दक्षिणाशोपकंठतः |
कुंडं प्रचंडवेगेन रुद्रोरुद्रवपुर्धरः || १७ ||
17. Īśāna who was identical with Rudra in a terrible physical frame, dug up a deep pit with terrific speed by means of his trident. The place was to the south of Viśveśa and very near him.

तैर्जलैः स्नापयांचक्रे त्वत्स्पृष्टैरन्यदेहिभिः |
तुषारैर्जाड्यविधुरैर्जंजपूकौघहारिभिः || १९ ||
19. With those waters as cool as snow, but devoid of Jāḍya (i.e. of the nature of knowledge), which removed clusters of sins and which were untouched by other embodied beings, he bathed (the Liṅga).

सन्मनोभिरिवात्यच्छैरनच्छैर्व्योमवर्त्मवत् |
ज्योत्स्नावदुज्ज्वलच्छायैः पावनैः शंभुनामवत् || २० ||
20. The waters were sparkling in colour like the (pure) minds of good people. They had bluish tinge like the path of the sky. Their lustre was brilliant like moonlight; they were holy and pure like the names of Śaṃbhu.

पीयूषवत्स्वादुतरैः सुखस्पर्शैर्गवांगवत् |
निष्पापधीवद्गंभीरैस्तरलैः पापिशर्मवत् || २१ ||
21. They were excessively sweet like the divine nectar; pleasant to the touch like the limbs of a cow; had grandeur like the intellect of a sinless person and were sparklingly moving to and fro (fickle) like the happiness of the sinners.

विजिताब्जमहागंधैः पाटलामोदमोदिभिः |
अदृष्टपूर्वलोकानां मनोनयनहारिभिः || २२ ||
22. Their scent excelled the sweet smell of lotuses; they were delightful with the fragrance of the Pāṭalā flowers. They attracted the minds and the eyes of the people in an unprecedented way.

अज्ञानतापसंतप्त प्राणिप्राणैकरक्षिभिः |
पंचामृतानां कलशैः स्नपनातिफलप्रदैः || २३ ||
23. They were, as though, the sole protectors of the vital airs of all living beings, distressed through the heat of ignorance. They were capable of yielding more benefit than bathing with potfuls of Pañcāmṛta (curd, milk, ghee, honey and sugar).

श्रद्धोपस्पर्शि दृदयलिंग त्रितयहेतुभिः |
अज्ञानतिमिरार्काभैर्ज्ञानदान निदायकैः || २४ ||
24. They were the producers of three Liṅgas(?) in the hearts of those regularly performing the ceremonious rinsing of the mouth with faith; they functioned like the sun in dispelling the darkness of ignorance; they yielded the benign gifts of wisdom.

Viśveśvara pleased with Īśāna manifested before him and asked for boon. Īśāna asked Viśveśvara to name well after him. This is what Viśveśvara says:

@TheDestroyer has already given a detailed answer from Skandha Purana. I just want to focus on two aspects:

Skandha Purana Kashi Khanda Purvardha chapter 33 starts with Rishi Agastya asking a question to Lord Skandha the name Gyanavapi comes there in that first verse itself:

Agastya said:
O Skandha, now narrate to me the greatness of Jñānoda Tīrtha. Wherefore do even the heaven-dwellers praise Gyanavapi very well?

Then Lord Skandha replies to this question of Agastya as:

Skandha said:
O Pot-born One of great intellect, listen to the origin of Gyanavapi that removes all sins. It is being narrated now by me.

So, the name Gyanavapi itself is used in Puranas and it is a Sanskrit word. Gyanvapi word is used in several places like:

GyanaVapi is one of the most important Tirthas and Skandha Purana says that every Hindu must visit Gyanvapi:

How can it be made possible to attain Jñānavāpī whose power is like this? Fie upon the life of those persons in this mortal world, by whom Gyanvapi is not seen!

It is absolutely clear from the above verse that every Hindu must visit Gyanvapi. Every Hindu should get the right to visit Gyanvapi whenever he/she wants considering the importance of this holy Tirtha. Gyanvapi is Shiva himself:

Gyanavapi is the cosmic form of Shiva himself. (Kashi Khanda 34.123)

There are many Tīrthas that sanctify (devotees) immediately. But they are not equal to even a sixteenth part of Gyanavapi.

Even the talk of Gyanavapi is fruitful:

By reading or causing to be read or listening to the auspicious narration of Jñānavāpi one is honored in the world of Shiva.

It is unfortunate that Hindus have been deprived of such an important Tirtha for hundreds of years.

It is mentioned in guru charitra by Shri Saraswati Gangadhar. 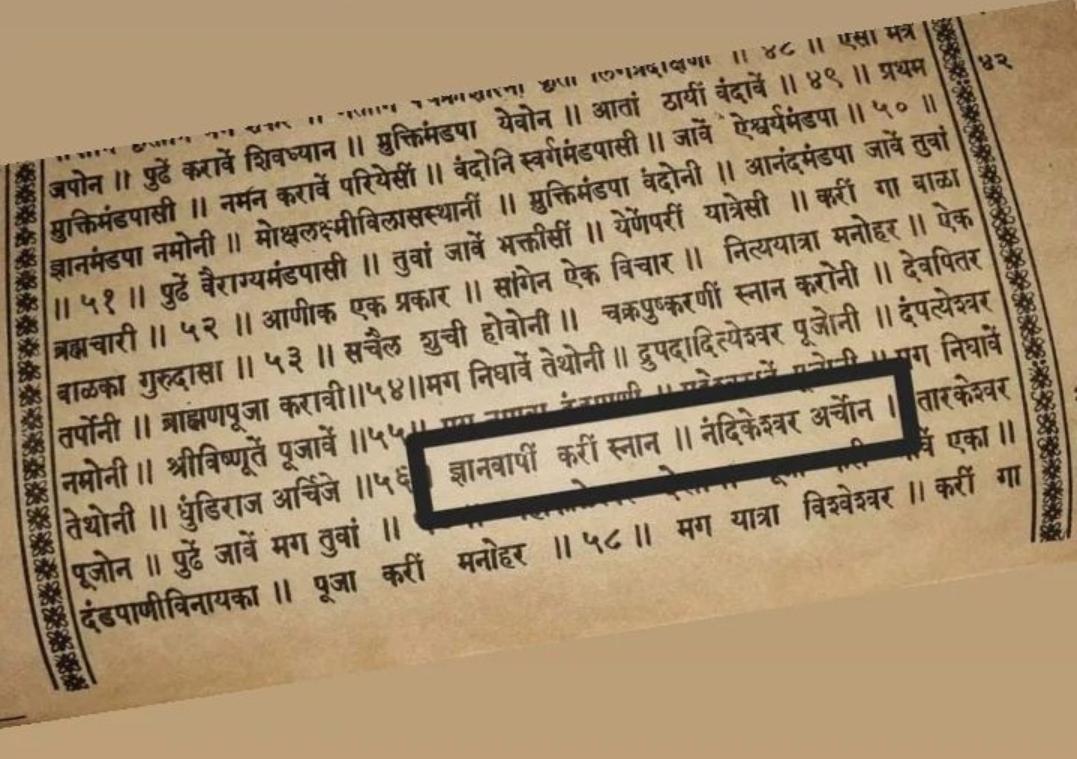 Having saluted god Viśveśvara, so also Bindumādhava, I devoutly bathed in the Jñānavāpī at Maṇikarṇikā. Having stayed there for three nights, I again came to Prayāga where actually Brahmā (lives) on the fourteenth day of the bright half of Pauṣa.

Note:-The Shri Guru Charitra is a book based on the life of Shri Narasimha Saraswati, written by the 15th-16th century poet Shri Saraswati Gangadhar.

Not the answer you're looking for? Browse other questions tagged scripture shiva history temple varanasi .

14
What are the eight forms (Ashtamurti) of Lord Shiva?
5
What are the dimensions of original Visvesvara Linga as per scriptures?