Who is the sage Pundarika who saw Vishnu coming out of a Shiva Linga?

I'm currently visiting India, and I just passed by a Vishnu temple in the town of Thiruparkadal in Tamil Nadu. Thiruparkadal is Tamil for "ocean of milk" (Kshirsagara in Sanskrit), referring to the divine abode of Vishnu; the reason it's called that is that it has a Ranganatha temple, depicting Vishnu lying down on the serpent Adiseshan just as he does in the real ocean of milk. But the more famous Vishnu temple in Thiruparkadal is the one next to it, the Prasanna Venkatesha Temple, which curiously depicts Vishnu coming out of a Shiva Lingam: 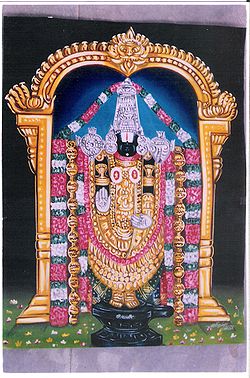 The story of the temple as I understand it goes roughly as follows (the Wikipedia article has a similar story.) The sage Pundarika once went to Thiruparkadal to see the Ranganatha Vishnu temple. When he arrived, he was hungry, but he had a policy that he would only eat once he got Prasadam from a Vishnu temple. But all he could find were Shiva temples. So he resigned himself to starvation and sat under a tree waiting to die. Just then, a little boy offered to take him to a Vishnu temple nearby. The boy led Pundarika to a temple which had Nandis on the outside, and Pundarika asked "Are you sure this is a Vishnu temple? It has Shiva's bull Nandi." But the boy insisted so Pundarika went into the temple, where he saw a huge Shiva Lingam. He told the boy that he wanted Vishnu, not Shiva, but the boy insisted that it was Vishnu. And suddenly Pundarika saw the Linga burst into pieces, and out of it appeared Venkateshwara (the Vishnu deity worshipped in Tirupati, AKA Balaji or Srinivasa). The deity came to be known as Prasanna (appearing) Venkatesa, because he appeared out of the Linga.

Sage Pundarika is the famous sage who offered lotus at the feet of Lord Vishnu (hence the name Pundarika, which means lotus).

The mention of this sage appears in the Kshetra khanda of the Brahmanda Purana.

Shiva told the story of sage Pundarika. Pundarika worshiped Vishnu at Yadugiri, and then he visited various places on the east coast ultimately reaching Varahakshetra and attain mukti.

Sage Pundarika was deeply in devotion of the Lord. He wanted to worship the Lord directly with lotus. He was told that the Lord was inside in the ocean. Without further question and in deep devotion he started emptying the ocean water using a pot! The Lord took pity on him, and in the guise of an old man, He approached Pundarika and said he will bail out the water in return for food. Pundarika went and fetched food for Him. When he returned, to his surprise, he did not find the old man, but the Lord reclining on the floor. As the Lord was reclining on the ground [stalam स्थलम in Sanskrit], the Lord is known as Sri Sthala sayana Perumal [ஸ்ரீ ஸ்தல ஸயந பெருமாள்], currently at Mahabalipuram.

Not the answer you're looking for? Browse other questions tagged vishnu shiva-lingam venkateshwara temple .

8
Is there any historical evidence for persecution of vaishnavaites by kulothunga chola II?
3
What do different Vaishnavite sects say about the sanctity of Siva temples?

10
What is the story of Vishnu appearing to sage Markandeya in Thiruvidanthai?
7
Who did Vishnu appear before in Thiruvahindrapuram, Bhumidevi or Bhumadevi?
7
Why does Periyalwar say that Krishna was born in Thirukottiyur rather than Mathura?
8
Legend behind origin of Vayu Lingam in Srikalahasti and its meaning
2
Is there any temple where Shiva is worshipped in the form of a pillar without pedestal?
3
What do different Vaishnavite sects say about the sanctity of Siva temples?