Why do images of Sudarshana have Yoga Narasimha on the other side?

I'm currently visiting India, and in the Vishnu temple in my native village of Poondi, I saw a shrine dedicated to Chakrathalwar. For those who don't know, that is the Sri Vaishnava name for Sudarshana, the deity of the Sudarshana Chakra, the famous discus weapon of Vishnu. (I discuss the origins of the Sudarshana Chakra and how Vishnu acquired it in this answer, and how Krishna got it in this answer.) Sudarshana is generally depicted with 16 hands holding various weapons. But what's interesting is on the other side of images of Sudarshana is an image of Yoga Narasimha: 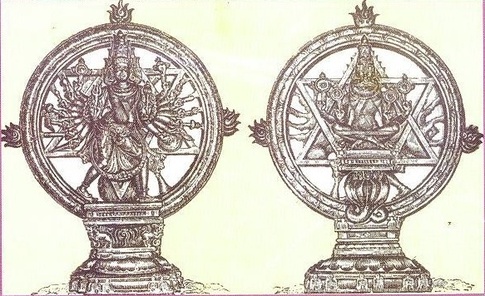 Yoga Narasimha is a form of Vishnu's incarnation as Narasimha the man lion, seated cross-legged in a Yogic posture. Here is how Wikipedia describes the story of Yoga Narasimha:

And the 87th chapter of the Uttara Kanda of the Brahmanda Purana says the sage did penance on the banks of the Padma Thadagam, as it was filled with lotus flowers, near the Gaja Giri Kshetram (the present Anaimalai) seeking progeny, and wanted the Lord to appear in His Narasimha avatar. The Lord appeared as Ugra Narasimha and the heat that emanated from Him was unbearable. Even the celestials were affected by it and they all came to Gaja Giri Kshetram and prayed to the Lord to calm down. The Lord could not be pacified and then they sought the help of Prahlada, whose arrival quietened Him to some extent. They prayed to the Goddess Mahalakshmi, who also took Her abode in Him as Narasingavalli, after which He became Yoga Narasimha.

But my question is, why is Yoga Narasimha depicted on the back of images of Sudarshana? I've seen various symbolic justifications for this, like Yoga Narasimha being the Shakti behind the Sudarshana Chakra, or Yoga Narasimha and Sudarshana representing Purusha and Prakriti, but what does Hindu scripture say on the subject?

The only scriptural citation I've found which seems to explicitly discuss the reason is from this page on Yahoo! Answers, which quotes the Ahibudhnya Samhita, one of the Pancharatra texts which were foundational in the development of Vaishnavism. (For more information on Pancharatra texts, see my question here.) Here is what the Ahirbudhhnya Samhita says:

(Meaning in essence: Sri Sudarsana Murti and Sri Yoga Narasimha Murti are here with a dual combination. The Sudatsana Murti is in violent form with 16 hands. Sri Narasimha has four hands. Both save bhaktas from the actions of enemies, diseases and save from Graha Doshas.)

Can anyone provide a fuller translation of this passage? It might contain the explanation.

Also, this answer on Quora also claims that the Pancharatra texts address this question:

According to [Pancharatra] Aagama Sastras - there is a need for Sudarshana Azhwar to be always backed up by some form of energy. Ideally, it is supposed to be a "Simha [Lion] Moorthy"- any Simha Moorthy for that matter - for the same purposes as mentioned that the Sudarshana derives his energy from Yoga Narasimha - although no mention has been made of the Avatar. It has been put into practice by our acharyas and guru's who decided to modify the aagama slightly (or could have crept in) - that Narasimha would be the most apt Moorthy behind the Sudarshanazhwar.

So where in the Pancharatra texts does it say that you should put a lion on the back of images of Sudarshana?

Does anyone know any other scriptures which explicitly address why Yoga Narasimha is put on the back? And on a side note, does Vishnu's actual Sudarshana Chakra have a carving of Yoga Narasimha on it?

The meaning of the verses are as follows:

"In the middle (of what), is the image of Yoga Narasimha, who is Eternal, and is bound by a Yoga Patta. He is four armed, and bears four Chakras (!) in his four arms. He is situated under the Ashoka Tree, and is radiantly adorned, ever willing to destroy his devotees' troubles.

He is the Supreme One, who is the ocean of countless Kalyana Gunas, excellent qualities, who causes his Bhaktas to tremble with fear. Sometimes both Yoga Narasimha and Sudarshana are contemplated upon; other times only the radiant Sudarshana is contemplated upon. (I am not sure of the next line: The contemplation of both of them is enough to destroy a multitude of astras, for they are verily the sacred Vishnu Mantras personified).

Thus, the Supreme Personality of Godhead, in his form as Sudarshana Chakra, destroys all Danavas and Daityas, with its infallible powers, which manifest as astras from His person. To control these bad elements, the Lord took upon this form of the Chakra, and thus is able to protect his devotees."

So the purported meaning, I think, is the bolded letters.

Lord Narasimhas nails an incarnation of Sudarsana Chakra Lord Nrsimha is so exalted that even His nails are glorified by the Vaishnava acharyas! In the Sudarsana-sata-nama stotra of the Sri Vaishnava sampradaya, it is said that Lord Narayana's Sudarshana Chakra descended as the tusk of Varaha, the axe of Parasurama, and the nails of Nrsimha. In this way, the nails of Nrsimha accompany the Lord in His various avatars. Trivikram Panditacarya a disciple of Srila Madhavacarya wrote the Nakha Stuti ,meditation on Lord Narasimhadevas nails : Nakha-Stuti - First Sloka pantu asman puruhuuta vairi balavat matanga madhyat ghata kumbi uchadri vipatana adikapatu pratyeka vajrayitabr "O Sri Nrsimha, who is omnipresent, may your nails protect me and others at all times. Just as a lion attacks powerful elephant groups and splits apart their heads with its nails and the vajrayudha (Indra's defense weapon) splits the highest mountains, in the similar way, the Asuras (who through the blessings of Sri Brahma, Rudra and the demigods) are like powerful exhilarating elephants who are easily killed by each of Sri Nrsimha's nails which are precious and powerful." Second Sloka prathatha shrimadkanteravasya sunakhara darita arati duura pradvastha dvanta shanta pravitata mansa bhavitah buribhagai "All demigods are devoted to and praying to these nails, which eliminates all bad elements in this world. They are very [devoted to] these nails as it will give all six senses of a brahmana or good qualities of the devataas. These nails will even give complete knowledge and the demigods come out of the darkness (of ignorance) by praying to these nails, they get peace and knowledge of all the qualities of Sri Hari." Third Sloka lakshmiikanta samantata kalayan opi eshita te samam pashyami naiv yah uttamavastu ataratah astama rasaha.

"Let us meditate on He who is known as the possessor of nails as hard as thunderbolts and sharp teeth. Let us be enthused by Lord Narasimhadeva." We daily should pray to Lord Narasimhadeva: SB 5.18.8 oṁ namo bhagavate narasiṁhāya namas tejas-tejase āvir-āvirbhava vajra-nakha vajra-daṁṣṭra karmāśayān randhaya randhaya tamo grasa grasa om svāhā; abhayam abhayam ātmani bhūyiṣṭhā oṁ kṣraum. Word for word: om — O Lord; namaḥ — my respectful obeisances; bhagavate — unto the Supreme Personality of Godhead; nara-siṁhāya — known as Lord Nṛsiṁha; namaḥ — obeisances; tejaḥ-tejase — the power of all power; āviḥ-āvirbhava— please be fully manifest; vajra-nakha — O You who possess nails like thunderbolts; vajra-daṁṣṭra — O You who possess teeth like thunderbolts; karma-āśayān — demoniac desires to be happy by material activities;randhaya randhaya — kindly vanquish; tamaḥ — ignorance in the material world; grasa — kindly drive away;grasa — kindly drive away; om — O my Lord; svāhā — respectful oblations; abhayam — fearlessness; abhayam— fearlessness; ātmani — in my mind; bhūyiṣṭhāḥ — may You appear; om — O Lord; kṣraum — the bīja, or seed, of mantras offering prayers to Lord Nṛsiṁha. Translation: I offer my respectful obeisances unto Lord Nṛsiṁhadeva, the source of all power. O my Lord who possess nails and teeth just like thunderbolts, kindly vanquish our demonlike desires for fruitive activity in this material world. Please appear in our hearts and drive away our ignorance so that by Your mercy we may become fearless in the struggle for existence in this material world. Thus ends chapter 18 of Sri Narasimha: Lord Narasimhas nails an incarnation of Sudarsana Chakra

Not the answer you're looking for? Browse other questions tagged vishnu weapon idols pancharatra narasimha .

25
What is the story of the "Sudarśana Chakra"?
25
Who gave weapons to Shri Krishna and Balarama and how?
7
Is the Satvata Samhita, the oldest Pancharatra text, available online in English?
6
What scriptures describe Narasimha turning into a mountain after killing Hiranyakashipu?
4
What scriptures describe Parashurama's mother's head being attached to a low-caste woman's body?

13
Why does Vishnu have eight arms when Krishna and Arjuna go to see him?
11
Where does the Linga Purana declare Vishnu to be the supreme soul?
10
What scriptures describe Sadashiva carrying Vishnu in Vishnu's abode of Paramapadam?
11
Who is the Bhashyakara who pretended to criticize Pancharatra?
4
Does Holi celebration have a link to the Narasimha avatar?