Could someone perhaps direct me to info regarding Smashan Kali & Guhya Kali?

I'm looking for scriptural info about Guhya Kali and Smashan Kali with translations if possible (Yogini Tantra and the like.) As in what the Tantra background/stories are for these forms of Kali, and what the sadhana methods/techniques are, if possible. I'm of Shakta faith.

Found this one question on HSE earlier, however the links don't work unfortunately :

What is the difference between Dakshina Kali and Guhya Kali? 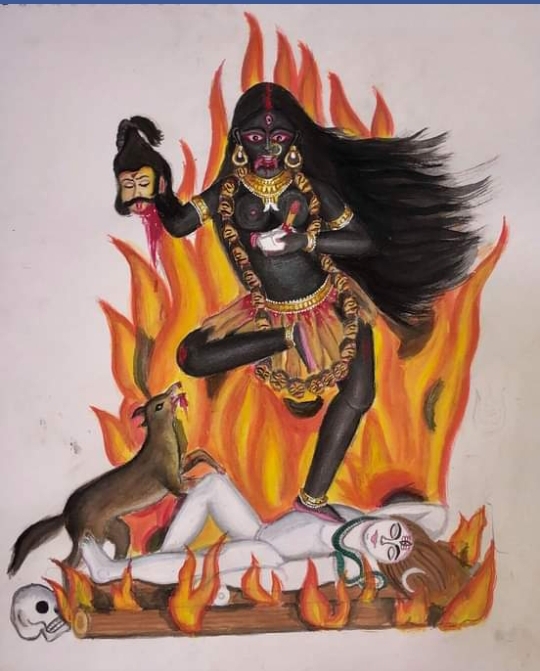 She is dark in complexion, and her hair disheveled. Her eyes are bloodshot and Her teeth is terrifying. Her body is gaunt and unclothed. She sports a long lolling tongue. In her left arm she carries a Kapala (bowl made of skullcap) containing blood, wine and meat. In her right hand she holds a decapitated head, from which blood is flowing. She is chewing on human and animal flesh constantly and rides in a cremation ground.

For Guhya Kali a complete khand is dedicated to her. Guhya Kali khand of Mahakala Samhita states her iconography as follows- 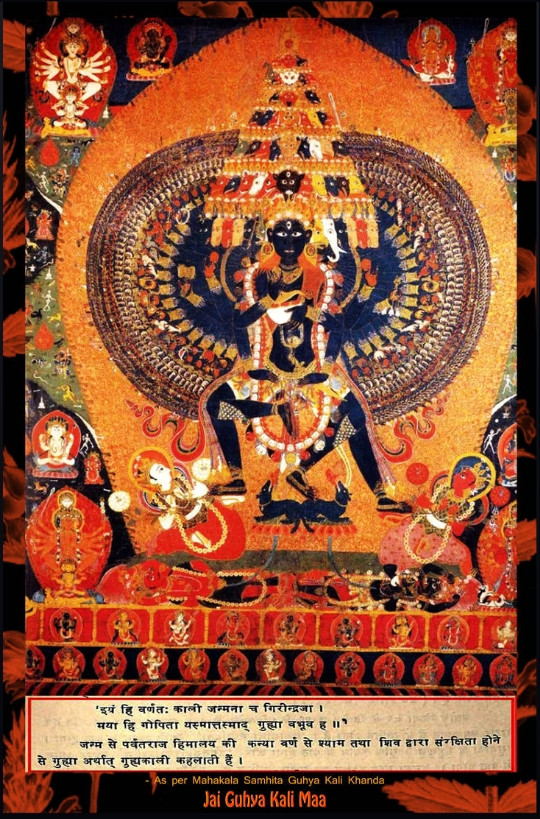 Guhyakali, Mahakala says, has forms with 100, 60, 36, 30, 20, 10, five, three, two and one faces. Different mantras correspond to these different forms, which he then reveals, using the usual codes for the different letters of the Sanskrit alphabet employed in other tantras.
Mahakala commences the discourse if

Guhyakali in simhasana, on her lion. She gives the dikpala or guardians of the directions to the five great corpses (Panchpreta) of Shiva on which she sits.
Bhairava is the sixth pitha, described as black complexioned with four arms. Bhairava appears terrifying and he is the cause of fear. He is five faced, each with three eyes. There is a khatvanga, staf and scissors in his hands. He also holds a skull and damaru. Garland of skulls adorn the fanged Bhairava. He is on an eight petalled lotus. Four petals of the major directions symbolize dharma, jnana, vairagya and aishvarya. Varigya is dispassion and aishvarya means dominion. Shiva, above Bhairava is clothed in tiger skin. He is two-armed and holds a skull-staff and a trishula.

Jagadambika, Mother of the Universe has a terrible lolling blood dripping tongue. Her laughter is sharp and shrieking. Both her garlands and earrings are skulls. She has fifty-four arms. In Her right hands she has rosary, scissors, goad, a rock, a danda, a jeweled pot, a trishula, five and arrows, a discuss, a bamboo stave, a fire hearth, a barbed hook, a man’s skeleton, young corpse and threatening mudra. She holds a bhindipala- a sling and shataghni- club studded with metal nails.
Guhyakali dwells within the centre of eight cremation grounds. These shmashans are: Mahaghora, Kaladanda, Jvalakula, Chandapasha, Kapalika, Dhumakula, Bhimangara, and Bhutanatha. Her worship honours the Vetalas or vampires, eight tridents, vajras, jackals and corpses, Bhairavas, dakinis, Chamundas, Kshetrapalas, Ganapatis and other denizens of the cremation ground.

Not all forms have anecdotes or itihas related to them. Yet Guhya Kali is mentioned in Devi Mahabhagwat when Durga rages war against Durgamasur. Also, smashan Kali has no itihas liked to her.

Actually tantra sadhanas can never be learnt online, and even if they are, then to practise thoe diksha is required. Thus let's wait till Bhagwati graces us with Guru.

5
What is the difference between Dakshina Kali and Guhya Kali?

6
Who is Kali Purusa ? Where did he come from ? How could he reign over a complete yuga of 4,32,000 years?
5
What is the difference between Dakshina Kali and Guhya Kali?