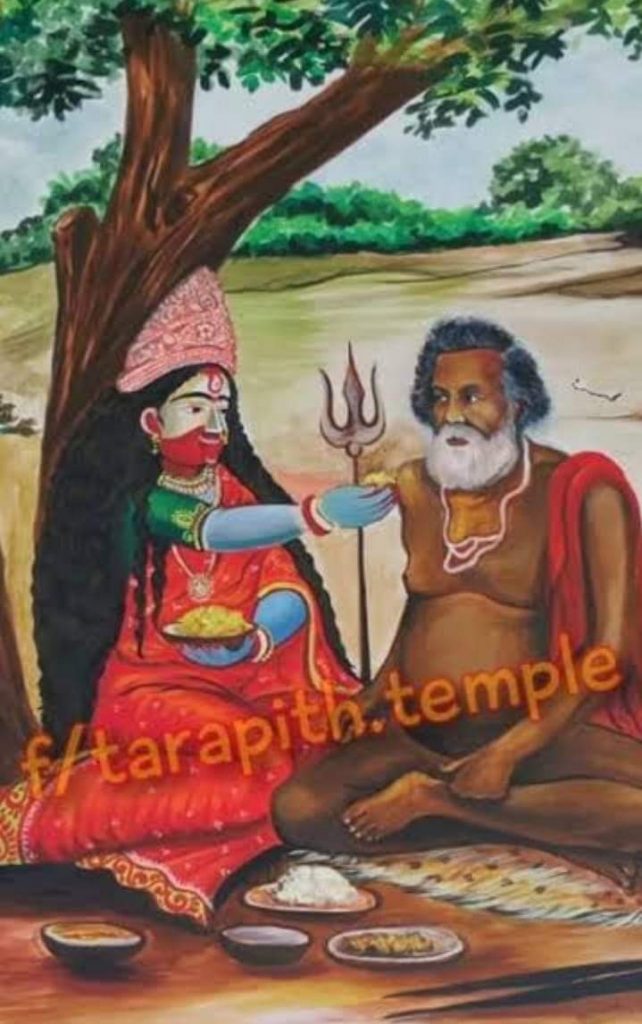 In addition to rigorous and stringent tantra training, would this mother-son type of devotional behavior by BamaKhepa be described as a sort of unique or unorthodox bhakti ? Therefore the tantrums and berating her and anger are acceptable ? Trailanga Svami had some of the same Avdhut approach and teachings. (Trailanga would be a topic for a different post altogether.)

Is this analogous to the type of devotee RamaKrishna was regarding Maa Kaali as a maternal figure? Found many stories in Shakta-faith like this. Perhaps on the Vaishnav side, it's somewhat like MeeraBai with Krishn, except it's maternal bond, not like how Meera felt Shyam/Madhav was her beloved.

I've heard many people describe bhakti-marg as such a personal journey and very different for every kind of devotee, kinda like the 9-fold bhakti types that Narad describes.

The descriptions I read of Svami NigamAnand were much different. He seemed to approach enlightenment from a more conservative scholastic/academic sort of mind-set, writing all those books and setting up hundreds of ashrams to beckon grihast people towards spiritual teachings. It seems BamaKhepa was his guru for a short period of time, then he sent NigamAnand to another mentor.

"In 1864, Brajabasi Kailaspati came to Tarapith as a monk (sannyasi) wearing sacred tulsi beads, and the red cloth of a renunciant. He violated traditional purity rules by eating with dogs and jackals. People thought him to be a powerful monk who practiced black magic (pisaca siddha). When Bama began to follow him and do as he did, the villagers began to refer to him as one without caste (he lost his Brahman priest status in their eyes and became an "outcaste").

Kailasapati was rumored to have brought a dead tulsi tree to life, walked on the flood-waters of the Dvaraka river, lived under water and flown in the sky. He was also said to have instructed ghosts and demons. Bama often saw ghosts and spirits assembled who would jump into trees and disappear into the dark when he was with his companion. Kailaspati explained that they had done meditation in this graveyard during their time on earth, but had died afraid and would come to him seeking advice."

"Bamakhepa was in the habit of moving around completely naked. One day someone asked him, “Why are you naked?” Bamakhepa replied, “My Father (Shiva) is naked; my Mother (Tara) is also naked. So, I am practicing that. Moreover, I don’t live in society. I live in the cremation ground with my Mother. So I have no shame or fear!”"

"He roamed around the cremation grounds happily, making friends with the dogs, naming them, and sharing his food with them (very unacceptable actions for a Hindu)."

"He performed worship after this, and a crowd gathered to see it. Bama did not follow the traditional rituals; he sat before the image and said laughingly, "So girl, you are having great fun, you will enjoy a great feast today. But you are just a piece of stone without life, how can you eat food?" He then ate all the food that was to be offered to the goddess and asked an assistant to sacrifice a goat- again without the traditional rites. He did not say any Sanskrit mantras, only a few in Bengali. He threw some leftover food to the image saying "there Ma, take that."

He took a handful of flowers marked with sandal paste and stood before the goddess. He cursed her and threw the flowers at the statue. He wet the flowers with his tears. Although the flowers were thrown with an attitude of abuse instead of reverence using mantras, they arranged themselves into a neat and beautiful garland around the goddess' neck, and the observers were amazed at the mantraless form of worship of the madman. He then went into trance which continued all day, and he emerged from it on the following day.

He was not a priest who followed schedules- often the time for worship would have passed and no one could find Bama anywhere. He would later be seen in trance under a Hibiscus tree in the jungle having arguments with the goddess.""Because of his continuous bhava, normal etiquette could be rejected. He would share the food offered to him with dogs, jackals, crows, and low-caste people, all from the same leaf, and would eat temple offerings on the burning grounds, sharing them with whoever or whatever wished to eat. He would drink liquor from the broken neck of the bottle, or from a skull. Yet he became highly respected, and was called Sri Sri Baba Vamaksepa. It was believed that he had gained spiritual perfection, and had regained all memories from previous lives."

People would call on him, asking him to pray to their household images, to enliven them with his bhava. He would fall into trance when he visited their statues, and often he performed neither worship nor chanting of mantras. He would loudly call into the air for the Mother, and many observers saw the statue appear to take the form of a human being. He could create such a powerful mood that even sarcastic people who came to laugh at him found the scene impressive."

"Bamaksepa was a Shakta with strong shamanic tendencies, who became the symbol of devotion for millions of Bengali Saktas. Divine madness was present in him from childhood, when he would have tantrums because the stone image of the goddess would not speak to him. He was associated with impurity (sharing food with jackals, eating the flesh of corpses, refusing to bathe, using urine in ritual, performing corpse rituals, and daily consuming wine and hashish) and shamanic powers (reading minds, acquiring knowledge at a distance, perceiving ghosts, spirits, dakinis, and yoginis, having skill in nature-magic and healing).

His healings often incorporated aggressive acts: one patient was cured by being kicked in the scrotum, another by being strangled. His techniques of' worship also included aggressive elements: he would curse both goddess and devotees, and set fires in which to have visions. Yet he is the saint seen by many Saktas as the ideal child of the Mother, more faithful to his goddess than any other devotee.Westerners may find it difficult to understand Indian devotional traditions where devotion creates both powerful positive and negative emotions.

However from the Indian standpoint, true surrender to the god means total involvement and dependence on him or her for everything. The acceptance of negative emotions in devotion along with the positive ones leads to a kind of obsession where the concentration on the god becomes almost yogic.

This same intense concentration is cultivated by the yogic practitioner but without the strong emotional component that is normally part of the path of devotion.The erratic behavior can be interpreted in two ways from a tantric standpoint.

The second or "hero" stage of Tantra where one has passed beyond normal human desires strives to break free of the moral conventions of society by ritually performing the five forbidden actions. Such ritual action is normally highly controlled and disciplined involving concentrated use of mantra and visualization.

However, the mad saint dispenses with the "ritual" performance, and chaotically violates society's norms in order to break free of the conventional nature of normal human awareness to encounter the divine reality. Such strange behavior also has the added advantage of scaring away unwanted attention from the curious which leaves much time for spiritual practice."

"A second interpretation is that the mad saint has entered the third stage of tantric development (divine bhava) where he is identified with the divine reality and therefore is beyond the human realm altogether. His behavior therefore obeys no law or pattern, and appears chaotic to outsiders. Clearly both stages are dangerous when looked at from the standpoint of societal norms."

There are 5 different types of Bhakti in Hindu thought. Mother-son relationship is standard and not unorthodox Bhakti.

But in order to realize God, one must assume one of these attitudes: santa, dasya, sakhya, vatsalya, or madhur.

"Santa, the serene attitude. The rishis of olden times had this attitude toward God. They did not desire any worldly enjoyment. It is like the single-minded devotion of a wife to her husband. She knows that her husband is the embodiment of beauty and love, a veritable Madan.

"Dasya, the attitude of a servant toward his master. Hanuman had this attitude toward Rama. He felt the strength of a lion when he worked for Rama. A wife feels this mood also. She serves her husband with all her heart and soul. A mother also has a little of this attitude, as Yasoda had toward Krishna.

"Sakhya, the attitude of friendship. Friends say to one another, 'Come here and sit near me.' Sridama and other friends sometimes fed Krishna with fruit, part of which they had already eaten, and sometimes climbed on His shoulders.

"Vatsalya, the attitude of a mother toward her child. This was Yasoda's attitude toward Krishna. The wife, too, has a little of this. She feeds her husband with her very life-blood, as it were. The mother feels happy only when the child has eaten to his heart's content. Yasoda would roam about with butter in her hand, in order to feed Krishna.

"Madhur, the attitude of a woman toward her paramour. Radha had this attitude toward Krishna. The wife also feels it for her husband. This attitude includes all the other four.

The Gospel of Sri Ramakrishna, Chapter 4, Advice to Householders

4
What Chandogya Upanishad verse is the sevenfold discipline of Bhakti Yoga related to?
8
What are the different types of Divine love mentioned in the Narada Bhakti Sutras?
13
Hanuman and the highest state of Sri Rama bhakti
2
Is it true that at Tarapith, bhoga is first offered to Bamakhepa and then to Tara Maa?
5
Maa Tara Tarapith prayers and chants in Sanskrit