Is Ashapuri Maa mentioned in any scripture?

Is there any reference to Ashapuri Maa in the scriptures?

Nope, Ashapura (Shakambhari devi) is not present in Shastras. Even if the temple website claims so, it can be purely denied & debated based on certain facts. The name Ashapuri appears thrice in Skanda purana. But all of them are not the one we are talking about.

These are the devis of Dharmaranya, which covers Sitapur, Gaya, Mirzapur, & runs till Modhera & Siddhpur ranges in Gujarat. While Ashapura devi is situated in Kutch(Gujarat) which is not a part of Dharmaranya. Also, Modhera & Mata no Madh are 534 kms apart.
But, there is more strong evidence mentioned in next chapter.

Chapter 22 - Installation of the Deities

So, it mentions the Shaktipeeeth Vindhyavasini devi to be just 21 kms frm there. Which is impossible. Because as per map duo are as far as 1739 kms.

171.This is Goddess Āśāpurī on the splendid banks of Mandākinī. She was eulogized by Tripurāri (Śiva) when he was desirous of conquering Tripura.

Thus, we see Kashi & Kutch are spread apart by 1000s of km. Also, Mandakini river gives the ultimate proof, as Mandkini exclusively flows in Uttarakhand. Thus, all possible claim that the Devi is mentioned in Shastras is cancelled out.

Now another question arises that maybe the devi Ashapuri is Ashapura herself?
The answer is a big No. Ashapuri & Ashapura are different devis. As, Ashapuri devi was eulogized by Shiva, whereas Ashapura name was given to Shakambhari, by the then ruler of Nadol, Rao Lakhan. (Anecdote below).

This can be understood with an analogy. For example when we take the term Ganesh. Ganesh means the lord of Ganas. Now, Vinayaka is a Ganesh, Nandi too is Ganesh, and but obviously Shiva is Ganesh too. So, we see the same term is used to address different deities but had same characteristic of being Lord of Ganas. Same implies with the name Ashapura. The deities are different, although names may mean same.

She is not expansion of Shakambhari, but is Shakambhari herself as Ashapura. This can be verified by the fact that at Piplav devi is established in two forms. And those are Shatakshi & Shakambhari.
But, how she got the name Ashapura is another very interesting anecdote (one of my favourite too).

You can read this article on blog to know full itihas.

Thus, as mentioned in Marwari historic work 'Nainsin Ri Khyaat', that Rao Lakhan came from Sambhar after being expelled & he worshipped his Kuldevi who was Shakambhari. But, since she helped him to establish his rule, Rao Lakhan called her, Ashapura.

Now, how Ashapura went to Madh is another story.

The most well known and popular version is that about 1500 years ago Karad Vania from Marwar (a term loosely used in olden times for the present – day Rajasthan) was touring this area to sell his wares, and stopped in the spot where the present temple of the goddess stands to spend the nine days of ‘navratri’ as he was a devotee of the Goddess Amba. He did not have any child, so he always prayed to her to give him a child. While sleeping in the night he saw the deity in his dream who asked him to build a temple on the spot where he stopped.

Fact Check-
At that time Ashapura was established at only 2 places one in Shambhar, 2nd in Nadol. Now Nadol falls in Marwar & Sambhar in Shekhavati region. Karad Vaniyo was Marwari (resident of Marwar) thus it's evident that he took Shakambhari from Nadol with him, also till then Rao Lakhan coined the name to devi as Ashapura.

Thus, that's how devi went all from Sambhar to Nadol & from there to Mata no Madh. 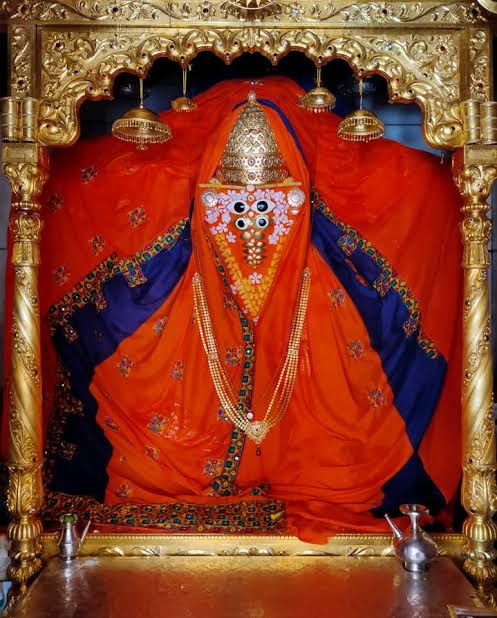 She has 14 eyes, which are visible in her Shringar. The rest 86 are present in sukshma roop.

Yes, there's references to goddess Āśāpurī in the Skanda Mahā-Purāṇa.

3
How many avatars of Adi Shakti are mentioned in Skanda Purana?

9
Which Hindu texts contains the story of Santoshi Mata and about her other legends?
4
References to the Kaumari form of Devi
8
Is there any reincarnation of Ma Saraswati?
8
Looking for scriptural reference of Shanta Durga