What is the story of Vishnu appearing to sage Markandeya in Thiruvidanthai?

The Alwars (also spelled Azhwars) are a group of 12 ancient Vaishnava saints who lived in Tamil Nadu and are famous for their poetry in praise of Vishnu. The Alwars are crucially important figures in the development of Vaishnavism; it is the principles and beliefs embodied in the Alwars' poems that ultimately gave rise to the Sri Vaishnava sect (of which I'm a member). The Alwars praised many Vishnu temples and other sacred places of Vishnu in their poetry; a sacred place of Vishnu that was praised by at least one Alwar is called a Divya Desam, and there are 108 of them;here is the list.

One of the 108 Divya Desams is Thiruvidanthai near Chennai, the site of the Lakshmi Varahaswami temple, AKA the Nithya Kalyana Perumal Vishnu temple: 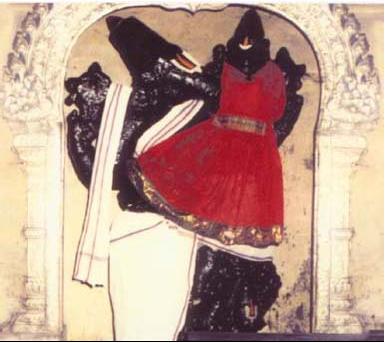 This is where Vishnu's incarnation Varaha the boar appeared to the sage Galava and married his 360 daughters, all of whom were incarnations of Vishnu's wife Lakshmi. They all merged into a single woman, Komalavali, who appears on Varaha's lap above.

But this web page says that Vishnu also appeared to another sage in this location; for Thiruvidanthai it says "Prathyaksham to Markandeyar". Prathyaksham is a term for a god appearing directly before someone's eyes. So my question is, what is the story of Vishnu appearing before the sage Markandeya in this place?

This is a story that I read in "Journey Through the Twelve Forests" by David L. Haberman. Markandeya occasion reminds me of Jed McKenna (the pseudonymous spiritual author) because their stories are so similar. McKenna occasionally quotes Indian spiritual works in his books, but not in a dogmatic fashion. The story which I'm about to relate is found both in the Mahabharata and the Bhagavata Purana.

D.L. Haberman version: Markandeya successfully enters the body of Vishnu and sees that the entire world is encapsulated inside it. "Everything is inside Vishnu." This is probably why the Vishvarupa of Vishnu is often described as being a macrocosm of everything. Traditional depictions of Vishnu show Him floating on an endless and featureless ocean, floating on His assistant, Shesha, accompanied by His consort, Lakshmi. Vishnu dreams the universe into existence. Alexandra David-Neel quotes a similar story where it is said that "the universe is but the dream of Brahman." Vishnu is often equated with Brahman, so, same difference.

At a certain point, Markandeya manages to escape from the mouth of Vishnu and finds himself outside of the universe, treading water on the featureless ocean (AKA, nowhere). He screams when he notices the utter nothingness around him. Vishnu wakes up and promptly plops him back in his mouth, thereby restoring his sanity. If you read McKenna's books closely you'll see that this is virtually, exactly what he experienced.

Mahabharata version: I read this one in the play adaptation by Jean Claude-Carrier, which is also quoted in McKenna's "Theory of Everything."

Much of the world has ended and become a wasted desert. Markandeya wanders around the wasteland for a several years until he sees a small blue child sitting underneath a tree (Vishnu). The child says: "you look tired, why don't you come into my mouth and rest?" Markandeya suddenly experiences a "strong disdain for life," and is swept up by an unimaginable current into the child's mouth. Wandering around inside the body of the child he sees everything on the Earth in its exact form. After an unknown amount of time he's suddenly drawn up back outside the child. The child says to him: "did you have a good rest?"

Bhagavata Purana version (book 12, chapter 9): Mr. Markandeya worships Vishnu until Vishnu is pleased with him. Vishnu asks Markandeya what he wants and Markandeya says he wants to see the power of the Lord's illusory potency. The Lord grants his wish.

Markandeya is walking around one day until the entire world undergoes dissolution, Mr. Markandeya is now floating on the causal waters all alone. Floating on some wreckage, he manages to make his way over to a child sitting underneath a tree, who once again inhales him into his body. He sees the entire universe inside for a moment and is exhaled back out.

Not the answer you're looking for? Browse other questions tagged vishnu temple darshan markandeya .

35
Are there any temples for Matsya, Kurma, and Varaha avatars?
6
Details about the deity Bhairava with reference to the scripture
6
Varaha Avatar story versions
5
What is the story of the Thiruvalavendhai Varaha temple in Mahabalipuram?
4
Where is the story of Upilliappan in the Brahmanda Purana?

9
Why does Kulasekhara Alwar call Vishnu "Vitruvakodu's Lord"?
7
Who compiled the list of 108 Divya Desams of Vishnu?
13
How many of the Divya Desams are the sites of Sri Vaishnava Temples?
7
Who did Vishnu appear before in Thiruvahindrapuram, Bhumidevi or Bhumadevi?
4
What scriptures describe the story of Vishnu's "subservience" to Lakshmi in the Nachiyar Koil temple?
9
Which Alwars mention the gods whom they're incarnations of?
3
Why does Thirumazhisai Alwar say the Pandava Thoothar statue of Krishna is older than him?