What is the meaning of Nirgun Paduka?

Everyone knows One of the most famous Dattatreya Peethas, is associated with Shri Narasimha Saraswati Swami, an incarnation of Lord Dattatreya at Shri Kshetra Gangapur in Karnataka. Where devotees worships Nirgun Paduka of Shri Narsihma Saraswati. 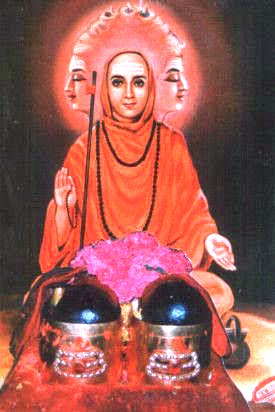 Hindu spiritual quest begins with Saguna(Form) nature of God and transcends slowly to Nirguna(Formless) as one progresses in his sadhana.

Lord Datta declares that "All the thirty three crore Gods, all the living beings, and endless crores of worlds are within Me and because of Myself they become dynamic and because of My presence, will have different kinds of powers. The ultimate refuge of all the rivers is the ocean. Whichever God is worshipped, the worship reaches Me. If I am worshipped, one will get the fruit of worshipping all Gods. The worlds which manifest coming out of My ‘Parabrahma’ tatwam, are My images only. The thing, coming out of My ‘Parabrahma tatwam’ as universe, is My image only."

This means Datta is beyond 33 crore Gods and the Trimurty(Brahma,Vishnu and Maheswara) who represent Trigunas(Satva,Rajas,Tamo).Thus Datta(‘nirguna’) transcends all the three ‘gunas’.His Padukas are therefor called as Nirguna Padukas.

Quoting the description given here

" According to Vedānta, the highest aim of existence is the realization of the identity or union of the individual’s ātman (Innermost Self) with the Ultimate Reality. Although Vedānta states that this ultimate reality is beyond name, the word Brahman is used to refer to it. Brahman is formless, infinite and eternal. Despite having the abstract concept of Brahman, Hindus worship the Saguna Brahman in his personal forms every day. Brahman, as Nirguna, has no attributes (is formless and unmanifested), whereas as Saguna (or Iswara) is manifested and with attributes. Saguna Brahman is also called Ishvara. Saguna Brahman — that is, Brahman with attributes — generally takes the form of one of Trimurti (three main Hindu deities): Brahmā, Vishnu, or Shiva (Maheshwara). These personified forms of Brahman correspond to three stages in the cycle of the universe. Brahmā corresponds to the creative spirit from which the universe arises. Vishnu corresponds to the force of order that sustains the universe. Shiva corresponds to the force that brings a cycle to an end — destruction acting as a prelude to transformation, leaving pure consciousness from which the universe is reborn after destruction. "

Not the answer you're looking for? Browse other questions tagged worship .