Does this verse of Mahabharata Shanti Parva say that Vayu also alomg with Rudra consumed poison, as some Madhwas claim?

The same thing is there in 27th verse of chapter 342 contained Volume 5, Page 2322 of The Gita Press, Gorakhpur Edition.

On the occasion of churning the Ocean for raising the amrita, Vrihaspati of Angiras race sat on the shores of the Ocean for performing the rite of Puruscharana. When he took up a little water for the purpose of the initial achamana, the water seemed to him to be very muddy. At this Vrihaspati became angry and cursed the Ocean, saying,--Since thou continuest to be so dirty regardless of the fact of my having come to thee for touching thee, since thou hast not become clear and transparent, therefore from this day thou shalt be tainted with fishes and sharks and tortoises and other aquatic animals. From that time, the waters of the ocean have become infested with diverse kinds of sea-animals and monsters.

Now, this verse which is present in Khumbhakonam edition, has a different verse than the others. What is the meaning of ths verse? Is this authentic? Can this verse or the other verse be used to prove that Vayu also along with Rudra or Shiva drank poison during Ocean churning episode? 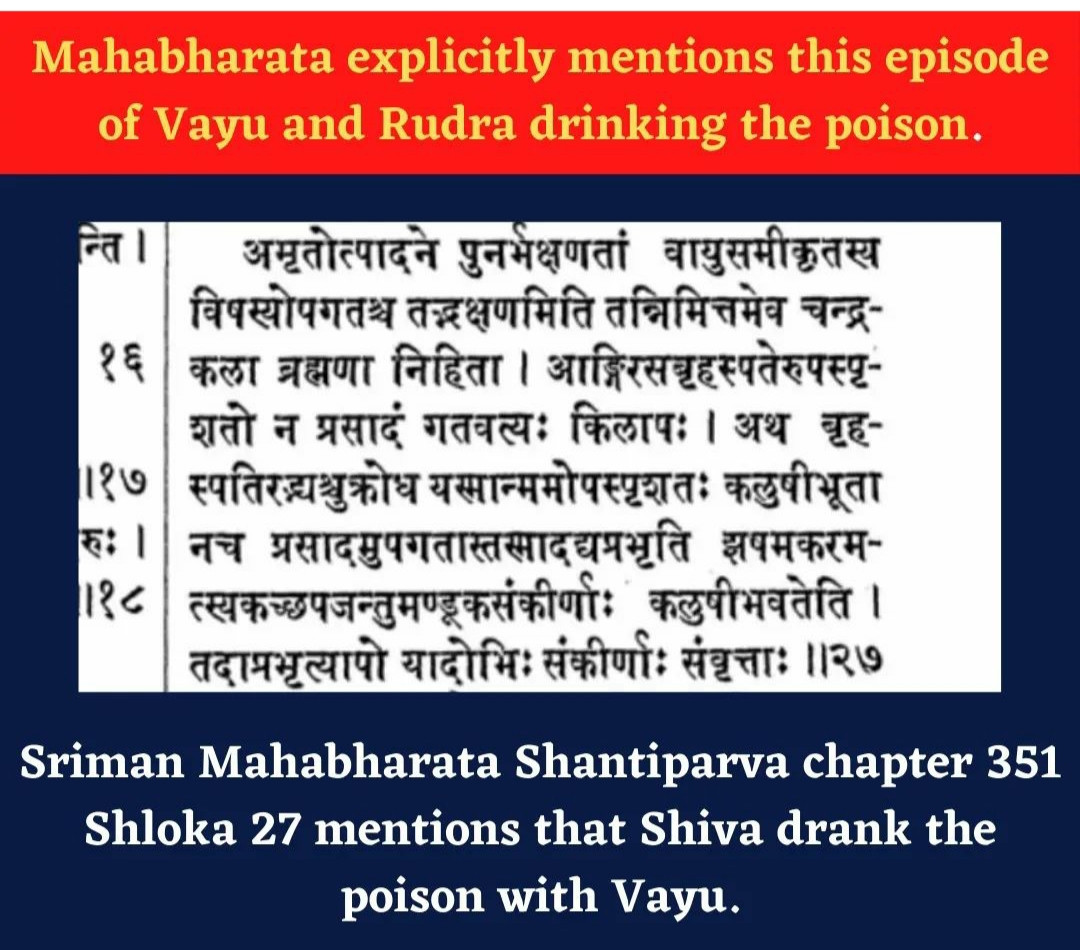 A basic translation of this shloka is as follows:

This shloka is authentic, since this incident of Vaayu consuming the halaahala poison has been mentioned by Shripaada Madhvacharya, in 10th Adhyaaya of the Mahaabhaarata Taatparya Nirnaya. Most scholars consider quotations till the 15th century authentic, since till that time quoting false or unreliable quotations was not an option. There were several scholars present throughout the Indian subcontinent and a Siddhaanta cannot be established obviously with fake quotations, since they would be refuted by other scholars.

Additionally, there is a direct pramaana from the Keshi Sukta of the Rgveda, which mentions this:

”Vaayu churned for him, the inflexible ground it when the radiant and along with Rudra, drank the poison, from his cup.”

One should be aware that these pramaanas are for the Vaishnava interpretation of the churning of the ocean. Other sampradaayas will have different views.

Well, in a philosophical way yes vayu did consumed the poison. Lets see how.:

(Devas and Asuras) With their sheer continuous exertion, they churned the Ocean of Milk. Due to excessive churning, the poison called Halāhala was generated from the Ocean of Milk. It was strong enough to burn down the three worlds. It came up to kill the heaven-dwellers. It went up still further and spread to all quarters. The entire sky was pervaded by it. The Kālakūṭa poison advanced to consume all the living beings. (97-98).

Vayu means air or atmosphere. So, spreading of the poison into the atmosphere or air can also mean Vayu consuming the Poison in another way. Prd..

I hope this clarifies your queries.