Who did Vishnu appear before in Thiruvahindrapuram, Bhumidevi or Bhumadevi?

I'm currently visiting India, and I went to the town of Cuddalore in Tamil Nadu. It contains a place called Thiruvahindram, one of the 108 Divya Desams. As I discuss in this question, the Alwars (also spelled Azhwars) are a group of 12 ancient Vaishnava saints who lived in Tamil Nadu and are famous for their poetry in praise of Vishnu. The Alwars are crucially important figures in the development of Vaishnavism; it is the principles and beliefs embodied in the Alwars' poems that ultimately gave rise to the Sri Vaishnava sect (of which I'm a member). The Alwars praised many Vishnu temples and other sacred places of Vishnu in their poetry; a sacred place of Vishnu that was praised by at least one Alwar is called a Divya Desam, and there are 108 of them; see the list here.

In any case, there are many special things about Thiruvahindrapuram. The main Vishnu deity is called Devanatha Perumal: 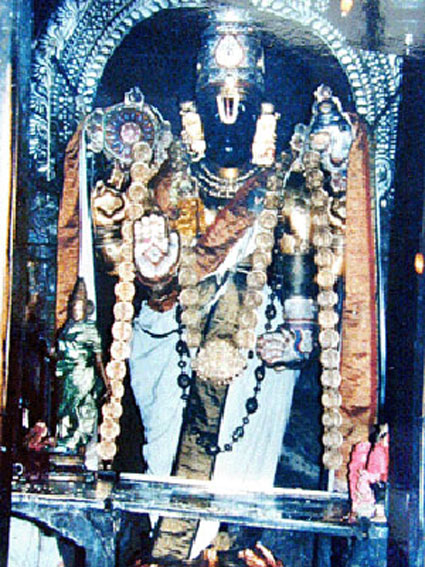 Once the gods needed help to defeat some Asuras, so they prayed to Vishnu in Thiruvahindrapuram. Vishnu appeared and killed the Asuras with his Sudarshana Chakra (discus weapon). Afterwards he wanted water, so his bird vehicle Garuda started digging for water with his beak, creating a body of water known as Garuda Theertham. But he was taking too long, so Vishnu's serpent Adiseshan used his tail to quickly dig a well for Vishnu. Another thing about this place is that right next to the Devanatha Perumal temple is a hill, formed from a part of Mount Oushadi which fell while Hanuman was carrying it. (I discuss that story in my answer here.) And on top of that hill is a temple to Vishnu's incarnation Hayagriva, who appeared before the Sri Vaishnava Acharya Vedanta Desikan.

I could ask so many questions about this sacred place, but for now let me just ask one. The priest of the Devantaha Perumal Vishnu temple said that the sage Markandeya and Bhumidevi engaged in Tapasya (deep meditation) here, and Vishnu appeared before them. When I heard this, at first I just assumed that this was about Vishnu's wife Bhumidevi, goddess of the earth; Vishnu married her after she engaged in Tapasya. But then I went to the famous Upillaiappan Vishnu Temple near Kumbakonam. That is where Vishnu, in his Venkateshwara form, married the sage Markandeya's daughter. Markandeya's daughter was an incarnation of Lakshmi and her name was Bhumadevi.

So my question is, who is it that Vishnu appeared before in Thiruvahindrapuram? Did he appear before Bhumidevi goddesss of the Earth, or before Bhumadevi daughter of Markandeya? The latter seems more plausible to me, since it would make sense that Markandeya and his daughter would together engage in Tapasya in order to get Vishnu as a groom.

I found these details on web site ramanuja.org where a devotee narrates the experiences during his/her travel to Tiruvahindrapuram.

The devotee says that based on reading of the book on 108 divya Desams published by TTD Devasthanams by Miss.S.Ramesh, the following are the sthala puranas

1) Once upon a time ,in Thirupapuliyur,Lord Shiva was praying to Lord Devanatha (Lord Vishnu) when an asareeri advised him to proceed to Garuda nadi and continue his penance. Lord Shiva followed the asereeri,and within short time Lord Devanatha (Lord Vishnu) appeared before him and he granted the help as requested by Shiva to kill the asura Triprasuras.

With Lord Brahma as charioteer, Mt Meru as bow, Bhoomi as chariot, Chandra +Surya as wheels, Vasuki as bow string rope,4 oceans as quiver, vedas as horses,Lord Vishnu as arrow.

The fierce battle resulted in the asuras being vanquished while at the same time Lord Shiva was being swept away by the river which was in spate. As always, Lord Devanatha (Lord Vishnu) came to the rescue by playing the divine flute on the river banks-the result;Samudraraja was pacified,lord Shiva was back on the shores safe and sound.

Even to this day on Masi Pournami the Theerthavari utsavam is celebrated wherin Lord Siva of Thirupapuliyur and Lord Devanatha (Lord Vishnu) get into the sea.

One of the great Srivaishnava achayas, Swami Vedanta Desika refers to this in his Desika Sukti - 'masi kadal adi mazhindu varuvare',i.e.have a sea bath in Masi and be happy.

2) Concering the revealation of Lord Vishnu as the Trinity:

Yet another battle between the devas and the asuras with the former being helped by our Lord Vishnu and the latter by Lord Shiva. Sudharshan chakra destroyed the enemies and returned victorious. In fact Lord Siva's 3rd eye also was no match at all to the dazzle of Sudharshana chakra of Lord Vishnu-it seems it was like lighting a candle in broad daylight.

Lord Vishnu had enough of the war when he recalled Sudarshana and pacifying him by revealing himself in his beautiful form.

It was at this juncture that the Trinity form of Lord Devanatha was also seen by Lord Shiva.

Trinity form had both Shankara and his consort Parvati as a part, Goddess Lakshmi was seated on His chest of Lord Devanatha, while Lord Brahma arose from his navel.

Devas, Brahmins, kings, and all people were part of the form.

In addition,in his body, God also revealed the Ekadasa Rudras i.e.manifestation of Lord Shiva in 11 forms.

3)The Lord felt thirsty after this fierce batle and hence sent both Garuda and Adishesha to fetch waterto quench his thirst. Adishesha hit into the earth and water came gushing out. He took that water to the Lord who was very pleased and said that the water would be reffered to as Shesha Theertham.

Meanwhile,Garuda who had gone to collect water from Viraja Nadhi entered Madhu vanam where a rishi was engrossed in deep penance.The muni had in his kamandala the Viraja Thirtham seeing which Garuda automatically tilted the same and diverted the water inside towards Oushada giri where the Lord was waiting to quench his thirst. But Garuda became disappointed on realising that Adishesha had already obtained water for the Lord.

The great Lord Devanatha, who cheers up one and all, found an appropriate solution by declaring that henceforth Shesha theertham would fulfill the wishes of all people who bathe in it while the river brought by Garuda would be known as Garuda Nadhi and will be considered equivalent to the Holy Ganges.

It is believed that the water brought by Adishesha was Patala Ganga.

Even till this day the Shesha theertha is located in the premises of the temple and the temple kitchen.

4)Another story related to the temple goes thus:

Brighu maharshi found a girl child on a lotus whom he reared with love and affection. He named the child as Bharghavi(daughter of Brighu). Note that there are only 2 placeswhere the Goddess is named Bharghavi-Thiruvahindrapuram and at Adanoor. The Thayar was also called Hemambujanayaki(which stays on as the official name!)as she was found on a golden lotus.

From childhood, the girl was always thinking of her Lord and finally Lord Narayana himself came to Brighu Maharishi for permission to marry Bharghavi.

To save Brighu from the sadness of separation from his foster daughter the Lord permitted him to continue to stay at that place with Lord Devanatha and his daughter which is why in Thiruvahindrapuram Bhrighu maharishi is seen to the left of Lord Devanatha in the temple sanctum santorium.

Not the answer you're looking for? Browse other questions tagged vishnu temple venkateshwara bhumi .

35
Are there any temples for Matsya, Kurma, and Varaha avatars?
21
Why did Laxman get injured by Indrajit's 'shakti' weapon?
1
Who is Villiputhur Bagavar, the Vaishnava Brahmin who refused to associate with ordinary Brahmins?

10
Why does Kulasekhara Alwar call Vishnu "Vitruvakodu's Lord"?
7
Who compiled the list of 108 Divya Desams of Vishnu?
13
How many of the Divya Desams are the sites of Sri Vaishnava Temples?
10
What is the story of Vishnu appearing to sage Markandeya in Thiruvidanthai?
9
Which Alwars mention the gods whom they're incarnations of?
4
Why does Thirumazhisai Alwar say the Pandava Thoothar statue of Krishna is older than him?