What is the story behind sons of Shani?

I got to know from a relative that Shani has 2 sons - Maandhi & Kuligan.

Just like Shani, they are supposed to create malefic effects according to Jyotisha. What is the story behind them? Very little seems to be known about them.

They are seen along with Shani and his 2 wives in Ramanathaswami Temple at Thirunaraiyur (Nachiarkoil) near Kumbakonam.[1]

There is a Tamil folklore from Ramayan about Maandhi's birth: When Raavana's son Indrajit was about to be born, Shani was poised to be in the 12th house of his horoscope which is a malefic house. Raavana forced Shani to be in the 11th house which is a beneficial house instead. Shani was forced to do as per Raavan's wishes but he had kept one of his legs partially in the 12th house. On seeing this, angry Raavana took his sword and chopped Shani's leg. The chopped portion fell in the 1st house and Maadhi arose from it and gave malefic effects to Indrajit(by giving him short lifespan).[3]

The story surrounding Shani's sons seem to be associated only with Jyotisha, endemic to South India and not much known outside that circle. Maandhi is supposed to be a shadow planet bringing ill effects.

Shani with his wives and 2 sons from Ramanathaswami Temple, Thirunaraiyur : 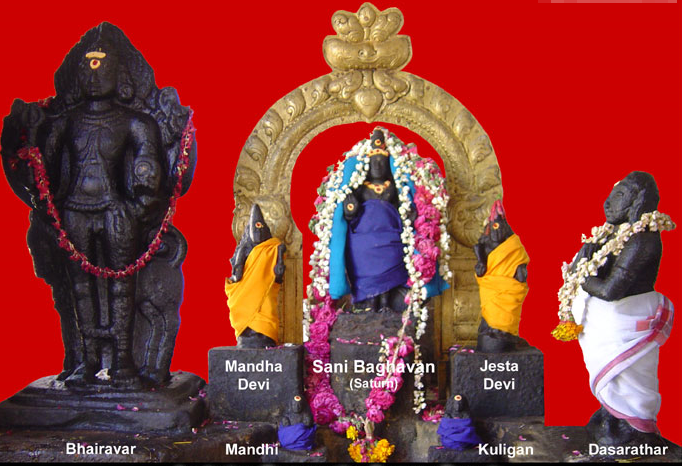 Not the answer you're looking for? Browse other questions tagged astrology shani .

1
Gulika and Mandi
5
What scriptures describe Shani as having six eyes?
2
What is the story of Lord Shani's wife Neelam?

4
Does Shani Sade Sati really affects?
2
Can people wear iron ring even when they already have good effect of Lord Shani in their lives?
8
Is there a Puranic basis for Graha relationships in Jyotisha? Else what is their basis as is traditionally taught?