Why and how Rath-yatra in Ahmedabad started?

As today is the day (29th June 2014) when Lord Krishna, Subhadra and Balram goes on a Rath yatra and that's famous in Jagannathpuri.

Since last 137 years that's happening in Ahmedabad, Gujarat as well and it is said that Jagannath puri and Ahmedabad's Rath yatras are very famous.

I know about the Jagannathpuri story but I've have any idea about Ahmedabad's Rath yatra.

460 years ago, one Sadhu named Shree Hanumandasji visited Ahmedabad and found the area besides near suitable for his stay. He founded small idol of his deity and worshiped during life. His successor sadhu Shree Sarangadasaji was devotee of Lord Jagannatha who (while sleeping) got visionary instruction from Lord Jagannatha to install idols of Jagannath with Baladeva and Shubhadra. So, the it became temple of Jagannatha. Sarangadasaji's next to next successor, known as Mahant Shree Narsinhdasji Maharaj introduced Jagannatha Yatra in 1878.

The history goes as follows: 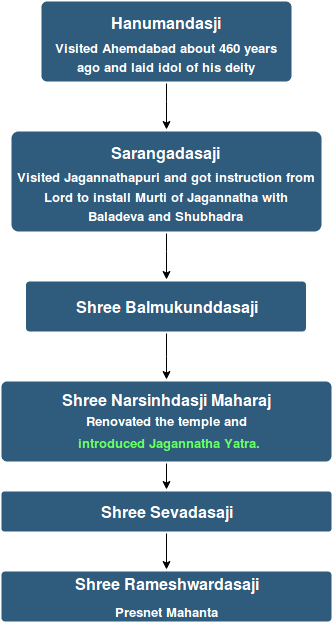 The historical details is available from official website of Jagannatha Temple Ahamedabad:

About 460 years ago this area where now stands SHREE JAGANNATHJI MANDIR CAMPUS, was a thick forest beside the river SABARMATI in the East and the city limit ended at the Jamalpur Darwaja in the North. Sadhus normally seek places of solitude beside rivers away from the noise of cities. Thus an itinerant sadhu Shree HANUMANDASJI by name happened to visit Ahmedabad and found this jungle area suitable for his stay. Being a devotee of RAMBHAKT MARUTI, he laid his deity’s idol, which is worshiped till this day. During his stay some miraculous happening altracted people from the neighbouring areas, which has become the root cause to developed this place into a modest temple.

His successor sadhu Shree SARANGDASJI happened to be a devotee of Lord Jagannath . He had an urge to pay a visit to the Jagannath Mandir at PURI (Orissa) and some local associates of his joined him in the pilgrimage. One night while he was sleeping at the Dharmshala of the Puri temple , he had visionary instruction from Lord Jagannath to go back to Ahmedabad and install there the idols of the Holy Trinity Lord Jagannath with his elder brother Lord BALDEVJI and sister Goddess SUBHADRAJI. Thus, the Maruti temple became Shree Jagannathji Mandir. A cowshed was built and since then began the GAU SEVA.

The next successor was sadhu Shree BALMUKUND DASJI and Shree NARSINHDASJI was the fourth Mahant known for his dedicated enthusiasm for multiferious religious activities aided by his equally generous devotees.

And regarding when Jagannatha Yatra started and by whom visit Festival Ratha Yatra:

Mahant Shree Narsinhdasji Maharaj had introduced the Rathayatra in the year 1878. Rathayatra is observed on ASHADHA SHUKLA DWITIYA every year.

Not the answer you're looking for? Browse other questions tagged krishna tradition history .

14
What scriptures describe Krishna's lover Nappinnai?
2
Why and how do Hindus celebrate Christmas?
16
Why does Lord Jagannath suffer from fever?
2
When and how did the system of adimai kaavu begin in ancient Kerala?
3
How to know the traditions to follow for events?