Why did lord Shiva chop off lord Brahma's fifth head?

As I've heard before, there was a story which said that lord Brahma had five heads but the fifth one was chopped off by lord Shiva.

So why did lord Shiva chop off the fifth head of lord Brahma?

Also, did he really had five heads or he has four as it's shown here? 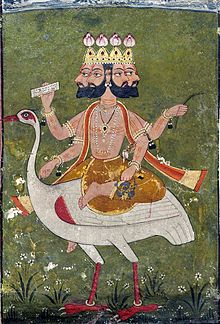 One such story says that Brahma created a woman named Shatarupa to help him with his job of creation. According to the myth, Shatarupa was so beautiful that Brahma became completely infatuated with her and stared at her wherever she went. Shatarupa was embarrassed by this attention and tried to escape his gaze, but in every direction that she moved, Brahma sprouted a new head until he had developed four. The frustrated Shatarupa became desperate and began to jump to try to escape his gaze. This prompted Brahma to sprout yet another head on top of the others in order to keep her in sight.

It is said that Shiva admonished Brahma for his "unholy" behavior towards Shatarupa and chopped off his fifth head as punishment. Brahma had given into the cravings of the flesh and abandoned the work of the soul and for this Shiva's curse was that people should not worship Brahma.

The story also goes on to say that Brahma has been continually reciting the four Vedas ever since as a form of repentance, one from each of his four heads.

I have seen the same story in other links too.

But I have also found a reference where there is no description of what I have referred from above links.

Brahma desired Sarasvati and went to her, asking her to stay with him. She, being his daughter, was furious at this and said, 'Your mouth speaks inauspiciously and so you will always speak in a contrary way.' From that day, Brahma's fifth head always spoke evilly and coarsely. Therefore one day when Siva was wandering about with Parvati and came to see Brahma, Brahma's four heads praised Siva but the fifth made an evil sound. Siva, displeased with the fifth head, cut it off. The skull remained stuck fast to Siva's hand, and though he was capable of burning it up, Siva wandered the earth with it for the sake of all people, until he came to Benares.

Summary: Brahmaji having brought about creation became arrogant due to the effect of Rajas (creation). His fifth head started reciting all the Vedas alongwith ancillaries, the Itihasa, etc., which caused so much Rajasik splendour so as to harm his own creation. The created beings then prayed to Lord Shiva who then plucked out the fifth head and danced around, earning the name Kapali.

The story of the chopping of the fifth head of Brahmaji has been described in the second chapter of the Avantīkṣetra-māhātmya of the Āvantya-khaṇḍa of the Skanda Purāṇa (khaṇḍa version).

At the outset, Brahmaji as Hiranyagarbha was endowed with five faces and four arms. After completing his creation, he became conceited about it due to the effect of excess Rajas:

Thereupon Brahmā became deluded and puffed up with Rajas. He blazed with his brilliance thinking thus: ‘The creative activity is mine. There is no other god equal to me by whom creation of Devas, Asuras, Gandharvas, beasts, birds and other creatures has been effected.’ Thus deluded, that Virañcya of five faces became arrogant.
-verses 35-37

His four faces were chanting each of the four Vedas respectively, but due to arrogance, the fifth face was chanting all the scriptures due to which, such great Rajasik splendour (described above) emerged from that face, so as to harm his own creation.

He began to recite the ancillaries of Veda and their sub-parts, Itihāsa including the mystic secrets and holy collections and all the Vedas with the fifth face having another eye. Like a lamp at sunrise all the Asuras, Suras etc. faded off, due to the brilliance of the face of that Lord of wonderful splendour. Though they were his good sons, the Devas became extremely distressed and mentally lost. They were not able to approach the splendour, look at it for a long time or even get away from it.
-verses 39-41

It at this time when the creation of Brahmaji was getting negatively affected by the radiance of the fifth face, that the created beings prayed to Lord Shiva to restore creation to its original state (verses 55-56). Hearing their prayers, Rudra Bhagavan goes to the place where Brahmaji is, creates greater splendour and plucks out the fifth head (enjoy this part, having included one Sanskrit verse because the effect doesn’t come without it):

Rudra, overpowered, with his brilliance, Pitāmaha... The elated Lord Rudra stood in front of him. The face of Brahmā assailed by Rudra’s radiance, did not shine. It did not shine like the moon at the time of sunrise though its rays are bright during the night. On seeing his son, the eternal Rudra Deva, standing proudly, he simply saluted only with (the gesture of his) hand [again showing Rajasik delusion] and spoke the words smilingly. The Lord of uneven (three) eyes replied to Brahmā only in smiles. Since Brahmā did not come to know the Lord as he was enveloped in his lustre, the Moon-crested Lord burst into boisterous laugh.

The Lord who had the brilliance of the moon in its height of refulgence, who had the moon, the sun and fire for his eyes, plucked off the fifth head of Brahmā with the tip of the nail of the left thumb, like a man plucking the inner core of plantain with his fingers. Afterwards, the head that had been cut off remained in the hand of Rudra. It was dazzling and terrible. Brahmā looked at it with great fear. The head shone due to the nails of the hand of Maheśvara like another moon stationed in the middle of the group of planets. The Moon-crested Lord jumped and danced along with that skull.
-verses 59-69

The skull is finally supposed to have been dropped in Ujjain in Mahakalavana. There is also a lore in Badrinath that Lord Shiva performed his prayashchita for ‘Brahma Hatya’ there, earning the place the name of Brahma Kapala. It is said that performing shraddha for the pitars is so beneficial that it ranks second, only to Gaya.

Fun fact: A similar version of the story has also been described by Sadhguru who’s a great Rudra devotee.

Not the answer you're looking for? Browse other questions tagged shiva brahma .

2
Does any scripture refer to Brahma of five faces without any connection to his beheading by Siva?
41
What are some online sources to get unabridged Hindu Scriptures or to learn Hinduism?
5
Who edited the Puranas?

22
Did lord Brahma commit incest with his daughter?
11
Do the Brahmanas of the Rig Veda mention Brahma and Vishnu's contest?
12
Did Lord Brahma kill any demons?
12
What is the story behind Lord Rudra (Shiva) holding the skull of Indra?
3
When Vishnu himself with the form of Vridhrasura made Brindha lose chastity, how come Brahma alone cursed for entering Parvathi abode with 5 heads?