Why do Hindus remove their footwear before entering temples?

Why is it that people don't wear shoes and sandals when they visit a temple? Sometimes they remove them outside of temple premises and sometimes outside of the temple steps...

It's a common practice amongst Hindu people whenever they visit a dharmik sthal/temple, so what's the reason behind removing footwear outside?

And is there a rule to do so, or do people just follow a common norm? 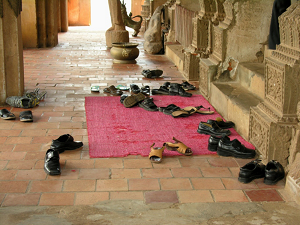 Credits for the image: double-barrelledtravel.com

Since no answer gives any reference from any scriptures, i am adding my own.

The reason is scriptural injunction. That is, scriptures ask us not to wear shoes where idols are placed.

There are 5 such places where one is prohibited to enter with shoes on. They are:

One should leave off his shoes [before entering] the house in which the Sacred Fire is deposited, a cow-pen and the presence of a Deity, or a Brahmana, [and before] taking his meals, or reciting [the Gayatri]. (61)

[If a person] putting on [his] sandals, goes, from his house, to the Five Rooms,* a pious king should cut off his two legs. (62)

However, these rules do not apply for the following special persons:

An Agnihotrin (i.e., who maintains the Sacred Fires), an ascetic, a S'rotriya, one who has completely-studied the Vedas ; these may go there with [their] sandals on ; others must be chastised with punishment. (63)

NOTE: Angirasa Smriti is counted among the 18 major Smritis that we have.

Not the answer you're looking for? Browse other questions tagged worship temple .

7
How do shoes affect prayers? Are they prohibited?
0
At Hindu temples outside India, do people have to go barefoot outside on the grounds?

17
Why do Hindu temples have Bells?
4
Why are non-Hindus not allowed inside temples?
9
Why are women advised to tie their hair in temples?
11
Why do Hindus cover their head?
4
Are there any Madhwa temples famous for their architecture/history/popularity with devotees?
1
Why are kumbhabhishekams of temples performed?