Rituals to be performed during Shiv Ratri and their significance 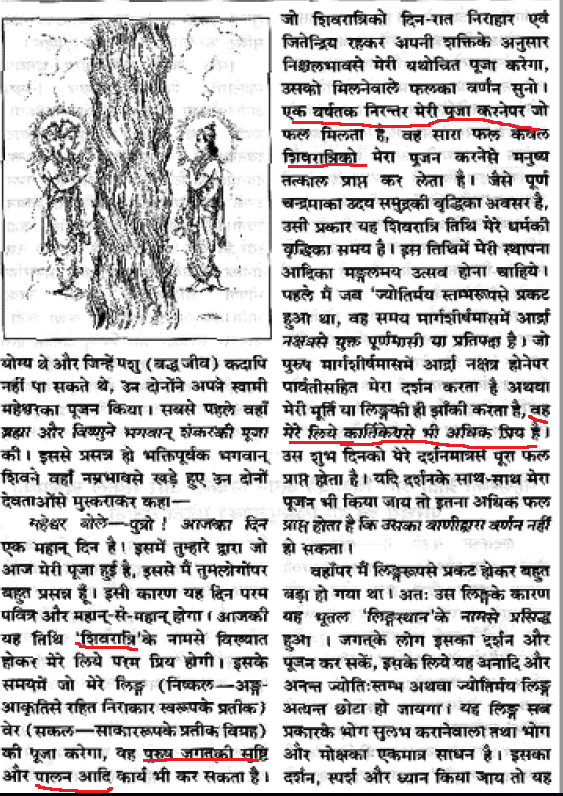 A devotee who fasts on Shivaratri remaining only on fruits, attain virtues equivalent to the worship done for the whole year.

One who has my darshan on this day (Shivaratri) or worships me in my form of linga is dearer to me than Kartikeya.

2. Rituals to be performed during Shiv Ratri 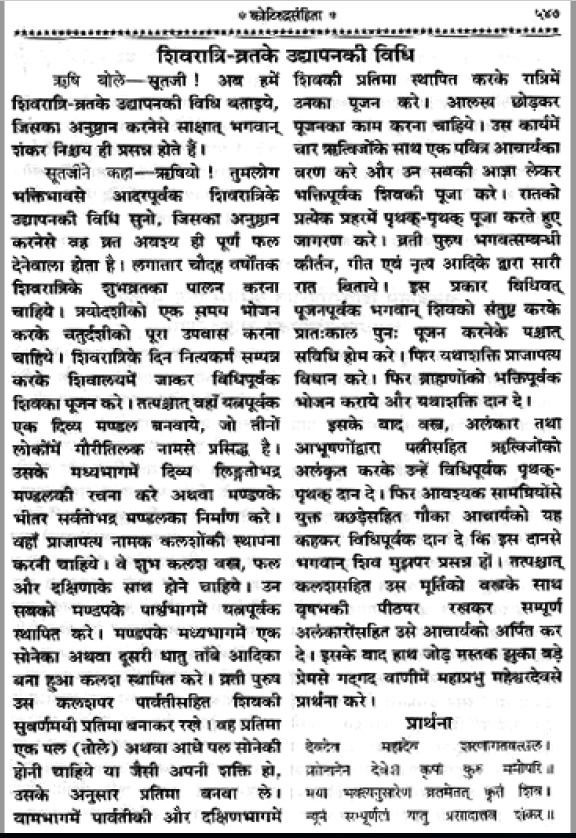 "Among all the austerities and fastings Mahashivaratri holds a supreme place. It falls on the fourteenth day of the dark lunar month of Phalgun. On this day the devotee should take a vow to observe a fast after awakening in the morning and finishing his daily choirs. He must observe a fast for the whole day and night. In the night he should worship me either in the temple or in his own home according to his convenience. He should worship me with the help of sixteen modes of worship (Shodasopachar). He should either chant the mantras of Laghurudra or perform 'abhishek' during the course of worship. While doing worship he should eulogize me and perform 'artis' in my praise. He can perform 'abhishek' with either of the followings - Milk, water, sacred water of belonging to a place of pilgrimage, sprinkling water with Kusha, Sugarcane juice, Honey and Ghee etc. The devotee should engage himself in my devotion for the whole day. In the end he should feed the brahmins and make donation to them. A fast observed in this way gives infinite virtues to the devotee."

Other Puranas on Shivratri

Parashar says: Once on the occasion of Shivaratri, Nand Baba and all other Gopas drove their carts with families and reached Ambikavana on a pilgrimage tour. There they took bath in the river Saraswati and with devotion worshiped lord Shiva and Parvati. They also observed day long fast and decided to pass their night on the bank of Saraswati.

The chaturdashi in krishnapaksha that comes between the months of Magha and Falguna is known as Shivaratri. Then one has to fast and stay awake the whole night. Earlier, there used to be an evil hunter named Sundarasena. But because he performed a vrata on Shivaratri, all his sins were forgiven.

Sage Lomesh eulogizes the virtues of Shivaratri in the following words--'The fourteenth day of the dark half of a month is dedicated to the worship of Lord Shiva and is famously known as 'Shivaratri'. It destroys all the sins committed by a man. Sage Lomesh then narrated a tale, which emphasized the greatness of Shivaratri-- Once upon a time a brahmin widow developed an illicit relationship with a 'Chandal' (a low caste man). Later on she gave birth to a son who was named Dussah. Her son had all the bad qualities one can think of-- a gambler, a drunker, a thief, a murderer, etc. One day, Dussah went to a Shiva temple with the intention of committing robbery. It was the festive night of Shivaratri and people had thronged the temple in a large number. So, he did not get an opportunity to steal temple property. He remained awakened for the whole night waiting for an opportune moment but his wishes remained unfulfilled. He spent his time listening to the divine tales of Lord Shiva that was being narrated by the temple priest. Though he was a sinner yet he took his next birth in a royal family on account of his two virtuous deeds--he had remained awakened for the whole night of Shivaratri and he had listened to the tales of Shiva. In his next birth, he was born to a king named Chitrangad and he himself was named Vichitraveerya. Vichitraveerya was a great devotee of Lord Shiva. He ultimately united with lord Shiva and manifested as Veerabhadra at the time when Lord Shiva had shaken his head violently after hearing the sad news of Sati's demise. There are numerous instances of people attaining salvation by observing a fast on Shivaratri. The names of some great devotees to do so are King Bharata, Mandhata, Dhundhumar, Harishchandra etc.

During ancient times there lived a hunter named Sundarsen in the province of Arbuda. One day, he went deep into the forest in search of his prey but unfortunately he found none. He wandered all over the place but in vain. When evening came, he climbed up a wood apple (Bael) tree to protect himself from the wild animals. Sundarsen was worried that his family would have nothing to eat that night. Engrossed in his contemplative mood, he kept on plucking leaves from the 'Bael' tree and throwing them down. There was a Shivalinga just under the tree and the leaves, which Sundarsen threw, fell down on it. Next morning while Sundarsen was climbing down the tree, his arrow fell down. While picking up his arrow, he touched the Shivalinga. Sundarsen was unaware of the fact that it was Shivaratri night and he had worshiped Lord Shiva with appropriate rituals albeit inadvertently-he had offered Bilva patra to Lord Shiva and had touched the Shivalinga. He attained to Shiva loka on account of the virtues attained by his inadvertent worship of Lord Shiva.

Not the answer you're looking for? Browse other questions tagged shiva rituals practice .

2
What are the right rituals & food for Maha Shivaratri fast?
13
How to please Lord Shiva to get grace?

9
Guru Purnima celebration
7
What is the reason for not shaving during Shravan Month?
4
What exactly happens to Prarabhdha karma while performing “Yoganidra” in Meditation?
6
Bhasma-Aarti at Mahakaleshwar temple Ujjain
6
Looking for Sri Kalki's stotram to Lord Shiva in Sanskrit