Why does only Uppiliappan have "Mam Ekam Saranam Vraja" written on his hand?

Most people only know about the Venkateshwara form of Vishnu (AKA Balaji or Srinivasa) in connection to the deity of the world-renowned Tirumala Venkateshwara Temple in Tirupati. But that is not the first time that Vishnu has come to earth in his Venkateshwara form. He came earlier as Upilliappan, the deity of the Upilliappan Vishnu Temple near Kumbakonam in Tamil Nadu, in order to marry Bhumadevi, daughter of sage Markandeya, who was an incarnation of Vishnu's wife Lakshmi. Markandeya was hesitant, since his daughter was so young that she didn't even know how to put salt in her cooking, but Vishnu said that he was willing to eat without salt, for which he came to be known as Upilliappan or the lord without salt.

But my question isn't about the story of Upilliappan, but rather about the statue itself: 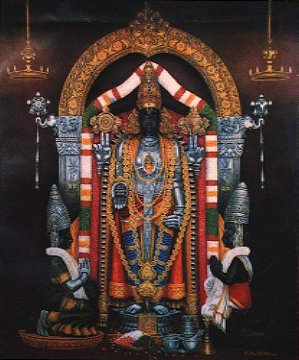 As you can see, there is writing on his (lower) right hand. It says "Mam Ekam Saranam Vraja", which is part of a famous verse of the Bhagavad Gita:

Abandon all varieties of religion and just surrender unto Me. I shall deliver you from all sinful reactions. Do not fear.

Sri Vaishnavas call this verse the Charama Shloka, and it is one of the Rahasya Traya or three secrets of Sri Vaishnavism, because it explains the path to Moksha known as Saranagati or Prapatti, which involves surrendering to the lotus feet of Vishnu. Since Upilliappan has a part of the Charama Shloka written on his right hand, pointed toward his feet indicating to devotees where to surrender, he is known as the lord of Saranagati.

But my question is, why does Upilliappan alone have "Mam Ekam Saranam Vraja" written on his hand? Why don't other Vishnu statues have it? In particular, why is it that the famous Venkateshwara deity in Tirupati, who also has his right hand pointed toward his feet, does not have the words written on his hand?

Did Upilliappan have the words on his hand when he came to Earth, or were they later written on his hand by humans? If the latter, when were they written? As I discuss in this answer, the Vaishnava saint Nammalwar talks in one of his poems about uniting with the lotus feet of Upilliappan. Is this a result of "Mam Ekam Saranam Vraja" being written on his hand, or were the words written later to reflect the sentiment of Nammalwar's poem?

This is a quite an old image of Sri Uppiliappan perumal, which is present at our home as well, and it does not have the "Charama sloka" printed on the right palm of the perumal. It might be that, his palm facing us indicating the sloka implicitly(which is why tirumalai perumual doesn't have the sloka on his right palm) and like you said, his fingers pointing down indicates where to surrender. But when it was written and why are good questions. We have to visit the temple and seek those history.

To all devotees Namo Narayana...... There is temple at THIRUNINRAVOOR near Chennai where there is a historical temple with Narayanan named as BAKTHA VATSALAN and thaayar as ENNAI PETRA THAAYAR. where you can find MAAM EKAM SARANAM VRAJAA.. in addition to this there are few temples also more.

Adding an answer... You can find these words only in few temples where Narayanan is always welcoming devotees and asking them to get surrender under my feet and I will save you... At such temples devotees where surrended(based on history) eg: MAKENDEYAN AND BOOMA DHEVI SURRENDED HERE AT OPPILIYAPPAN.... (ஒப்பே இல்லாதவர் this is also a reason for the name) so the inscription as been showed....

Not the answer you're looking for? Browse other questions tagged vishnu temple bhagavad-gita venkateshwara sri-vaishnava .

25
Why does God allow us to suffer?
13
What is the core message of the Bhagavad-gītā? What are some verses from Bhagavad-gītā that one can refer to, to enrich life in general?
17
Do we have any details about the oldest idol of any Hindu God found anywhere in the world?
12
What is the significance of Satagopuram?
10
How many days are there in one Yuga?
8
Do Sri Vaishnavas believe the Nachiketa Yagna grants Moksha by itself?
4
Where in the Mahanarayana Upanishad is the Nyasa Vidya, the path of surrender to Vishnu?
4
Where is the story of Upilliappan in the Brahmanda Purana?