Why Holika died inside fire, in spite of a boon?

King Hiranyakashipu tried many ways to kill his son Prahlada. Holika was his sister with a boon that a fire can not burn/harm her.

To kill Prahlada in fire, Hiranyakashipu asked her sister's help. She suggested that she will sit in fire with Prahlada in her lap, so this way the fire will burn the Prahlada.

Now when the fire was finished, Holika was burned into fire while nothing has happened to Prahlada.

So, My question is Why Holika got burned in fire even when she was having a boon not to get burned in the fire? In other words why the boon didn't work? 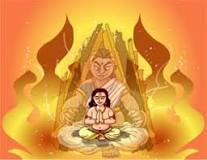 Topic of this week is holi

Reset to default
-1
Want to improve this post? Add citations from reputable sources by editing the post. Posts with unsourced content may be edited or deleted.

Holika's boon was that fire won't burn her, if she (only her) uses the magical shawal. While trying to burn Prahlad, she used the shawal but its not just her its also the Prahlad who was present, so that voilated the condition of the boon and hence died.

Not the answer you're looking for? Browse other questions tagged festivals boon prahlada .

0
Why did not demons think of burning only prahlad (without holika) on fire?

6
Why did Shiva granted a boon to Jayadrath?
5
Does Holi celebration have a link to the Narasimha avatar?
5
Why did Hiranyakashyap make Prahlad sit on Holika's lap and burn
4
Why do women observe Holika vrata?
8
Why didn't anyone ask for infinite wishes for a boon?
0
Why did not demons think of burning only prahlad (without holika) on fire?