Rules for wearing yagyopavit by women (yes it is possible)

I was going through this post answered by @Keshav Srinivasan , the following photograph (2nd in the answer) 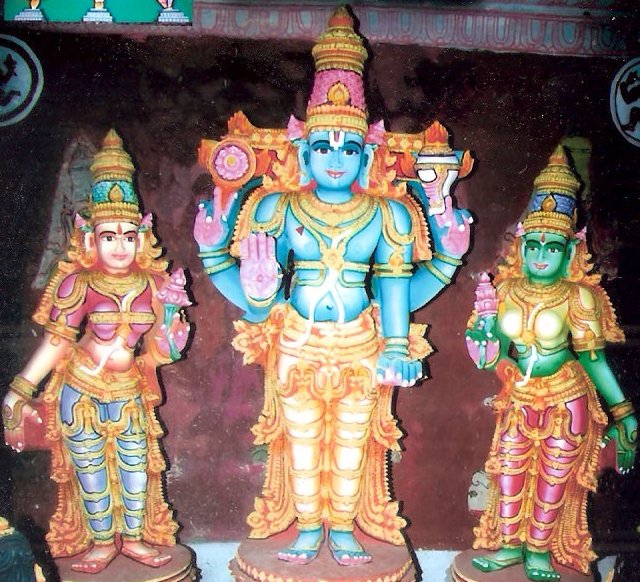 Depicts Shriman Narayana with his two wives, now begins my question is the goddess are wearing a Yagyopavit (yes look closely near nabhi/solar-plexus)!! Is there any scripture mentioning this or it is just an artistic imagination , depicting empowered women at the time of creation of this sculptor.

In ancient times, most women would have no education in the Vedas, and they would just become housewives. But in contrast to these women, known as Sadyovadinis, there was a very small number of women, known as Brahmavadini, who would abandon the material lifestyle that was the norm for women and instead went to a Ashram and learn the Vedas just as men did. For these women, the Harita Smriti prescribes the Upanayanam or sacred thread ceremony, as described in this book:

According to Harita Dharma-Sutra the sacred-thread ceremony has been declared necessary for brahma-vadini or girl-students. They should beg also from their homes while studying Vedas and performing sacrifices, etc. (Harita Dharma-Sutra 30-21.22) Ladies having no sacred thread were called 'Sadyo-vadhu' and thus they remained unpolished.

Vedas do not have any gender based discrimination. When it comes to vaidika dharma and practices both men and women enjoy same freedom. However, after the advent of sanyasa, the society slowly turned towards more male dominated and male chauvinistic in nature. Slowly women were deprived from their basic religious and social rights which were sanctioned by Vedas.

As per Haarita sutra, those women who are Brahma Vaadini have right for initiation, Vedic studies , Fire establishment and bhiksha etc.

As per Yama Smriti,

In olden times tying of girdle was prescribed for girls. So also study of vedas and uttering of Gayatri ( Savitur) preferably from father , brother or uncle. She is allowed for begging alms within her house limits. Yama refers to existence not only in olden days but during his times as well by his sentence पुराकल्पे ( यथैष्यत) तथा (अधुनाऽपि) इष्यते. The word तथा is specially put by Yama by way of comparison between old time and his own time so he says that during his time girls should learn from father, brother etc and she dont need to wear deer skin, bark etc. If Yama had intended to say that girls should not be initiated in his time unlike olden times he would say something like इह कल्पे तासामेवं न कुर्यान्मतिमान् क्कचित् ॥ As he uses verbs in present tense so we can make out that he prescribed rules for his own days and was the case in olden days too.

Gobhila says that Bride should wear the sacred thread when the bridegroom leads her to the altar.

ब्रह्मचरिणां च ब्रहचारिणीभिः सह विवाह् प्रशस्यो भवति - Pranavavada of maharshi Garga The Rig-Veda (V, 7, 9) refers to young maidens completing their education as brahmacharinis and then gaining husbands…
Rv. iii (55, 16) mentions unmarried learned and young daughters who should be married to learned bridegrooms. Without initiated by proper samskara, no one is eligible to utter holy vedic mantras. But women are found to utter them in many of Shrauta and Grhya sacrifices (yajnas).

As per Shatapatha Brahmana, The priest and Sacrificer go round the altar thrice from right to left, but maidens go from left to right. While doing so the maidens utter the Tryambaka mantra. ( II : 6 : 2 : 13 )

In Madana pArijAta the author quotes KAtyayana (KAtyayana samhita p.330) to show that if any samskara before the initiation ceremony is left unobserved, it should be performed with offering of oblation. Since Madana deals with these things under strI samskara section it is clear that women are entitled to initiation.

vAchaknavi is venerated as best among all the learned brahmana present in the court of King Janaka to ask Yajnavalkya, the most learned sage of that time to ask series of questions to ascertain if they should debate with Yajnavalkya or not. Yajnavalkya answered first two questions correctly however on subsequent occasion he did not encourage her to ask any further question. ( Brhd. Up. III : 3 )

As per GovindAnanda, The daughter will have the rights and not her father to perform the funeral and shraddha rites for her mother, provided she is brotherless. ( ShrAddha Kriya Kaumudi p. 464,469)

The mahabhashya shows that women attained fame as Mimamsakas as well. Ladies specialist in Kaashakrtsna were called as Kaashakrtsnaas. It also specially mentioned group of women Grammarians called Aapishalaas. ( 72 )

Sulabhaa was a vidushi (learned) to the extent that she could teach even Janaka. She could not be married as no male of time was equal to her in terms of knowledge therefore she was initiated into brahmavidya. (Mbh. XII : 320 )

In the Varuna PraghAsas ( second four monthly) sacrifice, after havis is placed and when wife leading to the fire for the karambha pAtra oblations. She utters the mantra "प्रघासिनो हवामहे मरुतः ..." [Shukla Yajurveda Samhita III : 45 ] for invoking the Marut's.

In AgnisToma sacrifice ( one of mahayaga) the wife while entering from south door, rubs the rods of the Soma Cart with remaining ghee left after the sAvitrI Homa with the mantra " देवश्रुतौ देवेष्वा घोषतम्प्राची ....." [ Shukla Yajurveda Samhita V: 17 ]

Yajnavalkya says : After offering Ekoddistha and Sapindikarana with mantras. Both should be offered to women also ( Unavimsati Samhita 1 : 2 )

As per Shankha, the daughter too like the son after the samskara, should observe the Ashaucha and perform funeral rites and do pinda dana and celebrate the Ekoddishta for her father. Here too no distinction has been mentioned between son and daughter. "दुहिता पुत्रवत् कुर्यात् माता-पित्रोस्तु संस्कृता । अशौचमुदकं पिण्डमेकोद्दिष्टम् सदा तयोः"

Devana Bhatta in the Shraddha Kaanda says : If she is desirous of a child , the wife should eat the cake. ( Smritichandrikaa Vol 4 )

From the time of marriage, the householder and wife , children ( son & daughter) or disciple should offer oblations to the Grhya Agni ( Ashvalayana Grhya Sutra 1: 7 : 1 )

Wife is so closely related to Agni that in the case of extinction of the fire, the wife has to do the fasting as a prayashchitta. ( "यदि तूपशाम्येत्....." Ashvalaayana Gruhya sutra 1:7:3 )

One of the commentary of Gobhila sutra states that wife should be given enough education so that she becomes eligible to perform the sacrifice since the sutras do not say that she should offer oblations silently.

From above evidences it is clear than women have right to vedas and yajnopavitam which is denied by most of vedantins.

Not the answer you're looking for? Browse other questions tagged vishnu women lakshmi vedic-rituals samskara .

3
Are women allowed to undergo upanayana?
36
Is the Anukramani index of sages and deities of the Rig Veda available online?
35
Are there any temples for Matsya, Kurma, and Varaha avatars?
17
Why are women not allowed to chant the Gayatri mantra?
9
Why do women not wear Yagnopaveetham (Janeu or Poonal)?
3
Why do sanyasa scriptures degrade women?
5
Who were the ancient women Rishikas in Vedas? What are the verses in Vedic scriptures which allow women to read Vedas?
-2
Mantras to attract a male
6
Is there any original detailed treatise on the rituals (Kalpa Vedanga) of the Vedas other than the Kalpa Sutras and who is the propagating Rishi?
2
Did Adi Shankara say that women and low castes cannot attain moksha?
See more linked questions

0
Are there Hindu-specific rules/norms for the status of women?
3
Do Vedas & Grihya sutras prescribe rules only for a Brahmin?
5
Which scriptures deal with rules for widows?
9
Does rAmAyaNa mention women chanting vedic mantras?
4
Is time period for rajaswala fixed for all women?
4
Reason for offering young unmarried women