Why does Vishnu have eight arms when Krishna and Arjuna go to see him?

Most people only know of occasions in which two different incarnations of Vishnu met, for instance the encounter of Rama and Parashurama as described in the Bala Kanda of the Ramayana. What is not as well known, however, is that Vishnu's incarnation Krishna once met Vishnu himself! The story is described in both the Harivamsa and the Srimad Bhagavatam. 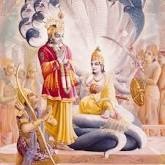 Once when Arjuna was visiting Dwaraka, he saw a Brahmana complain that all his sons were dying as soon as they were born. So Arjuna offered to stand guard and prevent any more of his children from being taken away by Yama god of death. But when the next child was born, it magically floated up into the sky. Arjuna was baffled by this, and he asked for Krishna's help in retrieving the Brahmana's sons from the afterlife. Krishna obliged and took Arjuna in his chariot. They left the realms of Man until they came to a region of darkness. Krishna cut through the darkness with the illumination of his Sudarshana Chakra, and soon they entered the brilliance of Brahman, after which they finally encountered Vishnu himself. Vishnu explained that he was the one who took away the Brahmin's sons, just to get Krishna and Arjuna to come there, as they were the next births of his incarnation Narayana and his twin brother Nara (whom I discuss here and here). Finally Krishna and Arjuna returned to Dwaraka with the Brahmana's sons restored to life.

But my question isn't about the story of how they met Vishnu, but rather about how Vishnu looked. Here is how the Srimad Bhagavatam describes him:

Arjuna then saw the omnipresent and omnipotent Supreme Personality of Godhead, Mahā-Viṣṇu, sitting at ease on the serpent bed. His bluish complexion was the color of a dense rain cloud, He wore a beautiful yellow garment, His face looked charming, His broad eyes were most attractive, and He had eight long, handsome arms. His profuse locks of hair were bathed on all sides in the brilliance reflected from the clusters of precious jewels decorating His crown and earrings. He wore the Kaustubha gem, the mark of Śrīvatsa and a garland of forest flowers. Serving that topmost of all Lords were His personal attendants, headed by Sunanda and Nanda; His cakra and other weapons in their personified forms; His consort potencies Puṣṭi, Śrī, Kīrti and Ajā; and all His various mystic powers.

My question is, why is Vishnu described as having eight arms? He is usually described in Hindu scripture as having four arms, not eight.

Is this one of Vishnu's manifestations, like the famous Vyuha forms of Vishnu discussed in Pancharatra texts? Are there any other scriptures that describe an eight-armed form of Vishnu?

EDIT: I found another verse from the Srimad Bhagavatam that mentions Vishnu having eight arms. It's from the Narayana Kavacham, a famous prayer to Vishnu that I discuss in this answer:

The Supreme Lord, who sits on the back of the bird Garuḍa, touching him with His lotus feet, holds eight weapons — the conchshell, disc, shield, sword, club, arrows, bow and ropes. May that Supreme Personality of Godhead protect me at all times with His eight arms. He is all-powerful because He fully possesses the eight mystic powers.

There is temple dedicated to Lord Vishnu (one of the 108 divya desams) in Kanchi, where Lord Vishnu is called Astabhujar, the Lord having eight arms. The Sthala purana says, He took this form to subdue and control Goddess Kali who on instigation by Saraswati was keen to disturb Lord Brahma's Yagna.

Lord first protected the Yagna performed by Brahma, from the wrath of saraswati, by obstructing the flow of goddess saraswati in the form of Vegavati river (another Divya Desam called Yathokthakari temple)

Next, when, goddess Sarawati out of frustation, sent Goddess Kali to disturb Lord Brahma's Yagna. Lord Vishnu took the eight handed form and subdued Goddess Kali and also a few other creatures and demons sent by saraswati, thereby protected the yagna of Lord Brahma.

Once Brahma completed the yagna, successfully, due to the grace of Lord Vishnu, Lord Vishnu himself emerged as Lord Varadaraja (the famous temple of kanchi)

Also, there many famous temples where Lord Narasimha has 16, 32 etc arms.

Krishna is considered avatar of Vishnu. Vishnu is personal expansion of Mahavishnu for our brahmanda.

As your text mentions, krishna met Mahavishnu (not vishnu). Mahavishnu sometimes depicted as the one with eight arms. There is one such depiction in Angkor Wat in cambodia.

Has not LORD KRSNA says Arjuna in SRIBHAGVAD GITA And yet everything that is created does not rest in Me. Behold My mystic opulence! Although I am the maintainer of all living entities, and although I am everywhere, still My Self is the very source of creation.

Chant HARE KRSNA and be Happy.

SrimanNarayana is the supreme Parabrahman who transcends names, forms, time and space. The thousand holy names of the Lord signifying His attributes pastimes (leelas) and incarnations were revealed to great seers of pauranic antiquity and was compiled into the great malamantra of Vishnusahasranama by Bhagavan Vyasa which was revealed by paramabhagavatottama Bhishma to Dharmanandana Yudhishthira. The suprapersonal Purushottama has assumed and revealed various divine forms(leelavigrahas) for the gratification and pleasure of great rishis and upasakas which were explained in great detail in agamas and hymns by them for the benefit of other devotees. The embellishments (alankaras), number of arms and face(s), form of face(human or otherwise), weapons(ayudhas) etc adorning the Lord are governed by the contemplation (bhavana) of upasakas. Apart from the dhyana of Narayanakavacha, a great many instances when the Lord appeared in his eight armed form are seen in the srimadbhagavatha mahapurana (eg. when the Lord appeared in front of Brahma, Rudra and deva-rishiganas at the end of Dakshayaga(fourth skandha), when the Lord appeared to Prachetasas (fourth skandha) and to Prachetasa Daksha(sixth skandha), when the Lord appeared and defeated the asuras at the end of ksheerasagara mathana(eighth skandha) and of-course when SriKrishna Paramatma and Arjuna visited him in Ksheerabdhi alias Shvetadvipa which is also known as karya Vaikuntha, situated at the summit of the brahmanda. This is the abode of the Lord visited by divinities and Rishis to supplicate the lord and to entreat his succour.This was the Bhagavalloka which was revealed to Brahma at the beginning of kalpa(second skandha) and also the loka visited by Sanakadirishis, where they encountered the dwarapalakas Jaya and Vijaya(Third skandha). This loka is also described in the panchamaskandha of srimadbhagavatha mahapurana as existing beyond the lokaloka mountain (the boundary between spiritual and temporal worlds). This loka is quite distinct from mahaVaikuntha or karanaVaikuntha or Paramapada which is inconcievable,indescribable and inaccessible even to Brahma and other exalted divinities). The difference between mahaVaikuntha and karyaVaikuntha is highlighted in narayaneeyam of melputtur bhattathiri also. Thus the leelamurthis of almighty AdiNarayana are legion and each may still be accessed through selfless bhakti and upasana(and purvajanmapunya) by pure devotees.

In various places in Srimad Bhagavatam Vishnu is described as eight armed, not the usual four armed figure we generally see in pictures. [Please refer to the descriptions in the Third, Fourth, Sixth and Eighth Cantos of Srimad Baghavad Mahapurana].

Why should Mahavishnu take on an eight armed form. While no direct answer is available in either Srimad Baghavad Mahapurana or Harivamsa, from various scenarios described in Srimad Baghavad Mahapurana a conclusion can be drawn that this is to distinguish the Lord from all his other devotees - Jaya and Vijaya the dwarapalas of the Third Gate of Vaikunta, the Vishnudhootas who reached to claim Ajamila as their own for journey to Vaikunta, etc are described as dark hued, four armed with the conch, discus and mace and clad in Peetamber - the yellow silken dhoti - appearing in the form of Vishnu leading to a logical conclusion that all denizens of Vaikunta are so endowed, and so to distinguish the Supreme Lord He assumes an Eight Armed Form.

This answer may also be treated as an opinion, but appears to be justified because of descriptions in the Puranas.

Not the answer you're looking for? Browse other questions tagged mythology vishnu krishna puranas bhagavata-purana .

18
Is there any scripture that tells story about Lord Vishnu and MahaVishnu?
16
What is the power of Narayana Kavacha mantram?
28
What is the story of Nara and Narayana's brothers Hari and Krishna?
5
Why Hindu gods are always depicted with multiple hands and heads but not legs?
14
What scriptures describe the story of Rama visiting Vishnu in Vaikuntha?
8
Why did Vishnu want to see Krsna and Arjuna?
4
Why does Vishnu's thousand-armed Aniruddha form carry the equipment of a student?
10
What happened to Vishnu's incarnation Narayana after his Pancharatra Yagna?

9
When did Krishna first meet Vishnu's bird Garuda?
12
What is the story of Vishnu's incarnation Hari, who rescued the elephant Gajendra?
8
Why did Vishnu's Sudarshana Chakra incarnate as Parashurama's enemy Kartavirya Arjuna?
16
Why Bhagavata purana is considered the foremost of all puranas?
6
What is the story of Vishnu's incarnation Jayanta, son of Yama?
8
Why did Vishnu want to see Krsna and Arjuna?
3
What was Muchukunda's next birth?