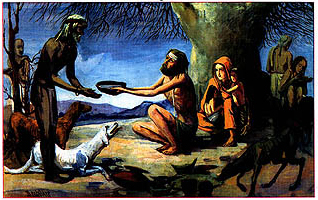 11
Did Vasishta's brother sage Agastya have a previous birth?
11
Were cows sacrificed in Gomedha Yagnas brought back to life as Chaitanya Mahaprabhu says?
5
Any examples of non-brahmin or non-kshatriya incarnations of gods?
3
Quote of Swami Vivekananda on selfishness
4
What are the stories of Brahmanas defeating Kshatriyas mentioned by Bhishma?

14
Who was Lord Hayagriva?
14
What is the story of Vishnu's incarnation Hari, who rescued the elephant Gajendra?
9
What was the purpose of Vishnu's incarnation as Rama's ancestor Mandhata?
14
When was Mahabali (Asura King Bali) booned about being the next Indra?
8
Why did Vishnu's Sudarshana Chakra incarnate as Parashurama's enemy Kartavirya Arjuna?
7
What boon did Lord Vishnu give to Dhruva?
9
What is the story of Kalanemi who was reborn as Kamsa?
4
Who is this King Bhavya who lived on the banks of Indus?