Who are kaala-veditha? Is this is a class of humans or higher beings or is there a definite source for such information?

I am not sure if the term you have mentioned is Vedhita or Vidhata so hazarding an attempt to answer the question:

Kaal means time and Vidhata means organizer/arranger so basically the term refers to the gods of fate and there are two of those - Dhata & Vidhata.

Section LXVI of the Sambhava Parva of Mahabharat mentions their origin as follows:

And Brahman had two other sons, viz., Dhatri and Vidhatri who stayed with Manu. Their sister is the auspicious Lakshmi having her abode amid lotuses.

Therefore they are sons of Bhrigu and the grandsons of Brahma. The Mahabharat mentions them along with Varun as having attained salvation at the banks of Saraswati: 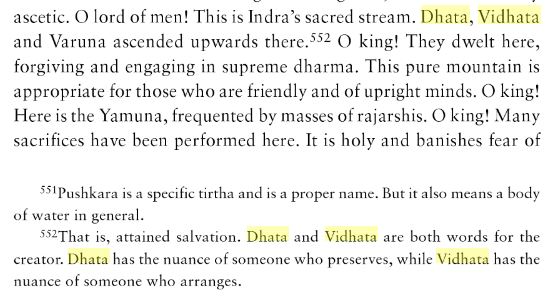 Again in the section where Jayadratha attempts to abduct Draupadi they are mentioned as divine beings at the level of Indra and Surya:

Not the answer you're looking for? Browse other questions tagged scripture gods .

14
Why did Lord Rama and Lakshmana separate?

6
Who are Gandharvas?
3
How Universe has No beginning?
10
Does not performing the Garbhadana samskara result in Sudra progeny?
9
Why do the gods look like human beings?
14
Who are the demonic beings called Yatudhanas?
3
Who exactly are Charanas?
4
Offspring due to marriage between a Sudra man and a Brahmana woman