Why are non-Hindus not allowed inside temples?

Many Hindu temples have a board which says 'only Hindus allowed beyond this point.'

What is the reason for this?

Was there a historical event which led to this kind of rule in Hindu temples? 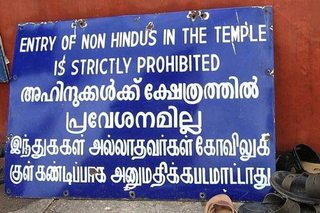 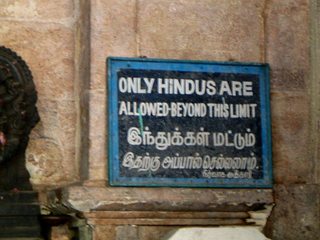 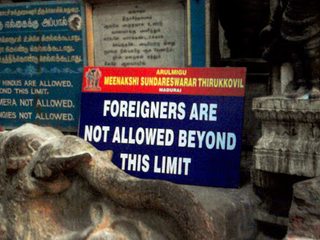 Temples are sacred places and there are certain rules to be followed before entering temple. These rules are known as Pancha Shuddhi (5 kinds of purity). According to this 5 types of shuddhi is needed before going to temple:

Not just a non-hindu, even hindus are not allowed inside temples if they does not posses one of this shuddhi.

I have seen such boards in some temples and this could be mainly due to their(non-hindus) way of living. Non-hindus often consume non-vegetarian food and in their living culture they are not required to bath before going to their prayer centers. As no one is allowed inside temples without pancha shuddhi, some temples are taking precautions by using such boards. This is not questioning anyone's freedom/ right to equality, it just points out that people are required to respect other's culture and should not intervene in their freedom of worship if they are not ready to follow set of rules within hindu religion.

There are many other temples which does not have these kinds of boards and allow non-hindus(by birth) for prayers (not for excursion). But in such temples also people are required to follow pancha shuddhi.

For example, in famous Sree Ayyappa temple, Sabarimala, non-hindus are allowed for the pilgrimage. See this quote from the website.

Certain customs are to be strictly observed if one has to undertake a pilgrimage to Sabarimala. A pilgrim attending the Mandalapooja should observe austerities for 41 days. During this period, the pilgrim should abstain himself from non vegetarian food and carnal pleasures. Pilgrims set out in groups under a leader, and each carry a cloth bundle called Irumudi kettu containing traditional offerings. Unlike certain Hindu temples, Sabarimala temple has no restrictions of caste or creed. The temple is open to males of all age groups and to women who have either passed their fertility age and those before reaching the stage of puberty.

Also see this link. It emphasize the need to follow the customs and there is no restriction if they are followed.

Actually we need to be hindus by our karma (like Swami Vivekanda mentioned about Brahmin), in that sense everyone following the customs can visit these temples.

According to Hindus, a temple is a place of sanctity.

It is supposed to be clean, peaceful, calm and silent with a serene atmosphere. Hindus normally go to temple after taking bath, after brushing the teeth and in neat and clean dress.

They also refrain from taking nonvegetarian food before going to temple.

A Non-Hindu is not expected to go like discussed above, since they won't be aware of these things.

That is one of the reasons for which they are kept back from entering temples from olden times.

But a believer should be allowed entry provided he approaches a temple as expected.

Hinduism was the way of life of Indians .Hindus believe in many Gurus or Prophets. The Buddha was one such Guru .So Buddhism in India was not considered as a different religion .
Hinduism was considered a separate religion after the spread of Islam in India .
Muslims do not believe in Idol worship . So they used to enter Hindu Temples to break the Idols inside .
These restriction of not allowing Non-Hindus to Hindu Temples came after the spread of Islam in India.

Not the answer you're looking for? Browse other questions tagged history temple worship culture other-religions .

4
Are non-Hindus allowed inside Tirumala Veṅkaṭēśwara Temple? Do they need to sign a waiver?
3
Can we eat food before we visit a temple?

7
Why don't Hindus enter temples after certain occasions?
13
What led to a unified Hinduism?
10
Why women were not allowed to offer prayers at Shingnapur Shani Temple?
11
Why do Hindus cover their head?
4
Are non-Hindus allowed inside Tirumala Veṅkaṭēśwara Temple? Do they need to sign a waiver?
9
Why low-caste people are not allowed inside some temples and homes?
4
How many husbands are permitted to a woman (polyandry) in ancient history?
18
What is the earliest Hindu work refuting Mleccha religions or philosophies?
3
What was the traditional justification for why Chandalas were not allowed in temples?
8
Are there any temples exclusively for women?