Where are the temples for Lord Ganesha along with his wives?

In this post, Who were the wives of Lord Ganesha?, I know that Lord Ganesha is married. Are there any specific temple for Lord Ganesha along with his wives?

Regarding temple famous for Lord Ganesha along with his wives, one is Siddhi-Vinayak temple in Mumbai, India.

Undoubtedly, the Siddhivinayak temple at Prabhadevi, Mumbai is one of the most famous temples in India where Siddhi and Buddhi are present along with Ganesha. It was constructed in 1801 using funds from Deubai Patil. 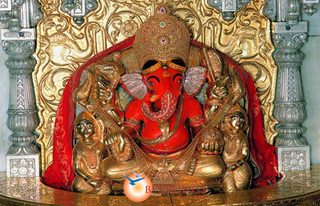 This is the most important of the lot. It was here where Ganesha married Siddhi and Buddhi, after slaying the demon Sindhu. Here Ganesha is seated on a peacock, hence the name "Mayur"eshwara. You can get to know the history of this temple in this other question which I asked. 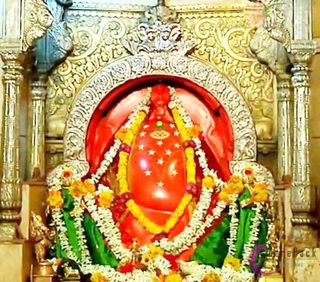 Another very old temple with ages of history. It is one of the 108 Ganapathi Sthalams. The official website mentions the history of the entire temple. 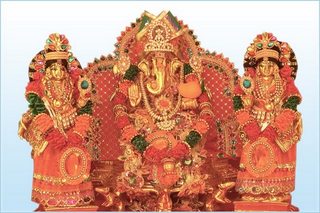 This temple was constructed in 1299, by King Hameer, a devotee of Ganesha (after the war with Allauddin Khilji concluded). Here, Ganesha is potrayed with three eyes, along with Siddhi and Buddhi. The story of the temple as mentioned in this blog is:

According to the history behind this temple, it is said that in 1299 AD, a war took place between King Hammeer and Alauddin Khilji at the Ranthambore fortification. During the war time, they filled there godowns with foods and other necessary things in Ranthambhore Fort, where the King dwells. As the war lasted for many years, the stored things in godowns were getting over. King Hammer was a great devotee to God Ganesh. One night when he was sleeping, Lord Ganesh came in his dream and said that all the lacking and problems would be over by tomorrow morning. Next day morning, an idol of Lord Ganesh with three eyes (Trinetra) stamped from one of the walls of the fort. Also, a miracle took place and the war got over while the godowns got filled again. In 1300 AD, King Hammer built a temple of Lord Ganesh. He placed the idol of Lord Ganesh, Riddhi Siddhi (his wife) and two sons (Shub Labh) along with the idol of mushak (mouse, his vehicle)

The temple was shortly destroyed. You can read about that in Chapter 3 of this book. 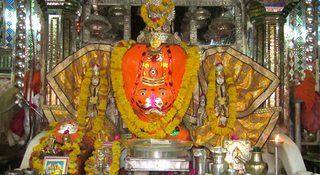 10
Do we have any information about other wives (except Riddhi, Siddhi) and grandsons of Lord Ganesha mentioned in any texts
9
Who are the wives of Lord Ganesha?
9
What is the legend behind Mayureshwara?

12
Why do idols of Lord Ganesha only rarely have the trunk turning to the right?
10
Why did Vyasa seek the help of Lord Ganesha?
9
Who are the wives of Lord Ganesha?
10
Do we have any information about other wives (except Riddhi, Siddhi) and grandsons of Lord Ganesha mentioned in any texts
4
Why is Lord Ganesha depicted with a snake around his belly?
7
Which puranas contain the story of the contest between Ganesha and Kartikeya for vighnadhipatyam?
8
Are there any temples exclusively for women?