Why lord Shiva has a crescent moon on his head?

Why there's a crescent moon over lord Shiva's head? 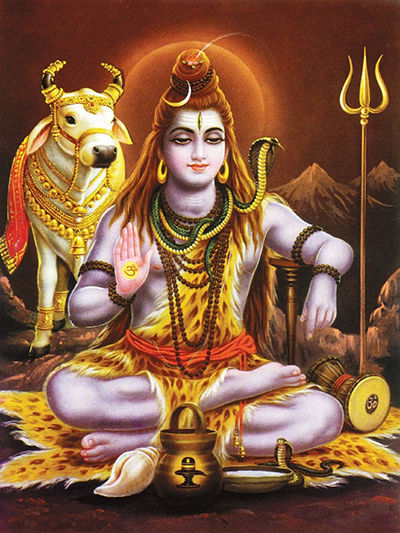 First we should know that Moon itself is a form of lord Shiva through his Ashtamurti form! As described in the answer there, Kaushitki Brahmana of the RigVeda (chapter 6) itself states:

He answered, ‘You are Rudra.’ Since the moon is Rudra, thereby Rudra harms him not, nor his offspring, nor his cattle, nor any one claiming to he his

He said to him, 'You are MahaDeva.' And because he gave him that name, the moon became suchlike, for the moon is Prajapati, and Prajapati is Mahadeva.

So, the Moon is very closely related to Lord Shiva. In other words wearing moon means Lord Shiva wearing a reflection of himself. But still all these Vedic truths manifests through various incarnations and leelas of Lord Shiva in the physical form which are described in the stories present in the Itihasas and Puranas. In the Skandha Purana (Prabhasha Kshetra 1.18), Devi Parvati asks this same question to Lord Shiva:

Here this Chandra (Moon) is on your head. Of whom is he born and how? At what time? Do tell me, O Lord!

Then Lord Shiva describes why Moon is placed on his head:

This is the period (Kalpa) well-known as Varaha. The second Parardha of Brahma is current now. At the beginning of the second month, this is the Pratipada (first lunar day). Lord Varaha redeemed and lifted up Dhara (the Earth) on this day, O my beloved. Therefore, this Kalpa came to be known by the name Varaha Kalpa on the Earth. In that Kalpa, O great goddess, O my beloved, the Sandhyamsa (twilight period i.e. interregnum of two Kalpas) has passed. The first Manu Svayambhuva was reigning, O goddess.The Ocean of Milk was being churned by Devas and Danavas. Gems, fourteen in number, were born (recovered) therefrom. Among them the highly refulgent Chandra (Moon) is one born of the Tattva (eternal principles). O goddess, O my beloved, he was held and kept on the head by me where he still continues to be. O great goddess, when the poison (Halahala) was swallowed by me while I was stationed in Prabhasa, Chandra was formerly made my ornament for the relief. Since I have been adorned with the Moon (Shasi), I came to be known as Shashibhusana (Moon-ornamented). Even today I am stationed in that holy spot in the form of Svayambhulinga.

So, During the Samundra Manthana when Chandra (Moon) arose from the sea. Lord Shiva used that as an ornament on his head. It also provided relief to Lord Mahadeva from the effect of poison (due to cooling nature of Chandra tatwa).

Moon also exudes Amrita (immortal nectar) on the head of Mahadeva and bathes Mahadeva with it. The heat produced by Vasuki causes the Moon to exude Amrita from it. Padma Purana describes one such incident:

Thus as clear from the verses above Moon also bathes Lord Shiva with Amrita.

Chandra was once cursed by Ganesha to lose his light gradually. And the curse was reduced, upon Chandra's prayer, and he was made to wax and wane, each phase lasting for 14 days (Refer this answer).

Soma is the celestial Moon described in Atharva Veda 11.6.9 which says:

“Soma; whom the learned men call Chandrama the Moon making all delight”.

“The Supreme Being keeps making Soma, the eternal delight”

This is empirical to the expression of amṛta dripping from the crescent moon on Śiva’s head in the later Puranas, but before we make this conclusion let’s explore further. Sometimes, Soma is the full moon belonging to the Tiṣya/Pusya month, on this day oblations are given to Rudra. Monday is called Somavara and is the day of Śiva TS2.2.10. Similar to Rudra, the concept of Soma enters into various aspects of the Yajñá (Yagna). In this way, Soma enters into the offering of the Soma juice, into clarified butter called ghee used in Yagna, or the full moon, into medicines, into amṛta, and is the very ṛta. In other places, Somapavamana, meaning the purified/clarified/refined version of Soma, gave rise to both Indra and Viṣṇu during Yajñá RV9.96.5. Now if we move to Baskala Shaka of RV. then ‘ Since the moon is Rudra, so you are Rudra, thereby Rudra harms him not, nor children, nor cattle, .." So, if we keep this link open and continue in later Vedas we can see "Shatapatha Brahamana 6.3 in the origin of Gayatri and Rudra:

"Prajapathi: my son you are the Great God (Mahadeva) I give you that title (Rudra), the moon became him, for the moon is Prajapati, and Prajapati is Mahadeva"

So even before the Puranic literature came to be, Somashekara is a well-established iconification.

15
What are the eight forms (Ashtamurti) of Lord Shiva?
10
Why is Lord Shiva called Soma?
14
Why does lord Shiva wear a Naga (snake) around his neck?
11
Why did Lord Ganesha curse the Moon?
6
What phase of moon is represented by crescent on the head of Bhagwana Shiva?

14
Why does lord Shiva wear a Naga (snake) around his neck?
14
Why did lord Shiva chop off lord Brahma's fifth head?
21
Why is Kartikeya not worshiped much compared to lord Shiva, lord Ganesha and goddess Parvati?
14
Does lord Shiva smoke Chillum?
13
Why didn't Lord Shiva put back the original head of Lord Ganesha?
11
Why is Moon on Lord Shiva's head only shown as crescent?
5
What is the symbolism behind Ganga flowing from Lord Shiva's head?
9
When did Lord Shiva slash Lord Vishnu's head off.?
7
Why does the half-moon symbolize timelessness in Hinduism?
6
What phase of moon is represented by crescent on the head of Bhagwana Shiva?