Why do people offer mustard oil to Lord Shani?

It is often seen that people offer mustard oil to Lord Shani, mostly on Saturdays and Tuesdays.

So, what is the significance behind pouring mustard oil over Lord Shani's Idol? 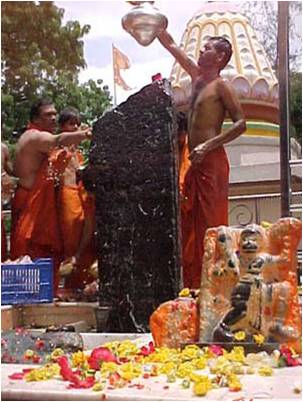 One day, Hanuman was performing some duties for Lord Ram. Shani Dev who noticed this wanted to create problems and tried to disturb Hanuman from his work. Hanuman got his angry as his duties towards his master, Lord Ram was getting delayed. Therefore, the powerful Hanuman caught Shani Dev by the tail and kept knocking him against a big stone. He kept on continuing the tasks for Lord Ram at the same time. Finally after his work was over, when Hanuman turned to look at Shani Dev, Shani apologised for his mistakes. Hanuman was gracious enough to accept Shani Dev’s apologies. Shani Dev then promised Hanuman, that he will never obstruct t any task performed for Lord Rama and that he will not hurt the true devotees of Lord Ram and Hanuman during their lifetimes. Hearing this, Hanuman was very happy.

Since Hanuman was continuously knocking Shani Dev against a big stone, the latter suffered severe wounds in his body and was in immense pain. He requested Hanuman for some oil to be applied for his wounds. When he applied the oil that Hanuman gave, on his wounds, all his pain, wound and scars vanished. Shani Dev was very happy as he was relieved from all pain and troubles. This is why, even today, people who worship Shani Dev, offer oil to Him, to make Shani Dev happy.

This is the reason that some people worship Hanumanji on Saturday too, because Lord Shani promised Hanumaji to not make trouble to worshippers of Lord Raam and Lord Hanuman.

There is also one variation of the story where Shani Dev thought of taking test of Hanuman's power and he asked him to move away from the way but Hanumanji didn't change his position. Shani Dev tried by all way to move him but he doesn't even able to move his tail. Then Hanumaji gripped him in his tail and jumped all around the jungles and mountains and making Shani Dev injured. And then Shani Dev asked for making him free and Hanumanji agreed on a promise that he will not make trouble to Rama and Hanuman devotees. And Hanumanji gave him oil for his injuries. (This version of story is heard in Temples and can be read in local books too.)

When Lord Ram was constructing the bridge to Lanka to cross the ocean with his army, Lord Hanuman had the liability to look after the bridge in case the enemies damage it. One day, when Lord Hanuman was praying to Lord Ram sitting under a tree, Shani Dev arrived there and said that he is the most powerful God. He added that he had heard Lord Hanumaan to be very powerful, so he wanted to test his might with Lord Hanumaan. He asked Lord Hanumaan to open his eyes and fight with him.

When the pain became intolerable, Shani Dev requested Lord Hanumaan to release him. He also added that he would never do a same mistake again. Hanuman asked Shani Dev to promise him that he shall never cause problems to Ram’s devotees. Shani Dev promised that he will do the same. He would never hinder in the destiny of Lord Ram’s and Hanumaan’s devotees. Hanuman then loosened his tail’s hold and freed Shani Dev.

After Shani Dev became free, he requested Lord Hanuman to give him some oil to ease his miserable pain. Lord Hanuman offered him some mustard oil. After that oil massage on his body, the pain was calmed instantly. Since then, it is traditional to offer mustard oil to Shani Dev. It soothes his body pain. He feels pleased and this makes him kind towards the Lord Ram’s devotees.

Not the answer you're looking for? Browse other questions tagged temple shani .

8
Why oil is offered to Lord Hanuman on Saturday?

34
Why do Hindus remove their footwear before entering temples?
5
What is the story behind Padmanabha Swamy?
5
How do Hindus justify depositing money in a Temple Hundi or giving money during Aarthi?
1
Worshipping lord Shani even when I have good Effects of Lord shani in my life
6
Bhasma-Aarti at Mahakaleshwar temple Ujjain