What is the significance of nãrikel (coconut) in pooja?

In almost all Poojas (worship) nãrikel (coconut) is used. 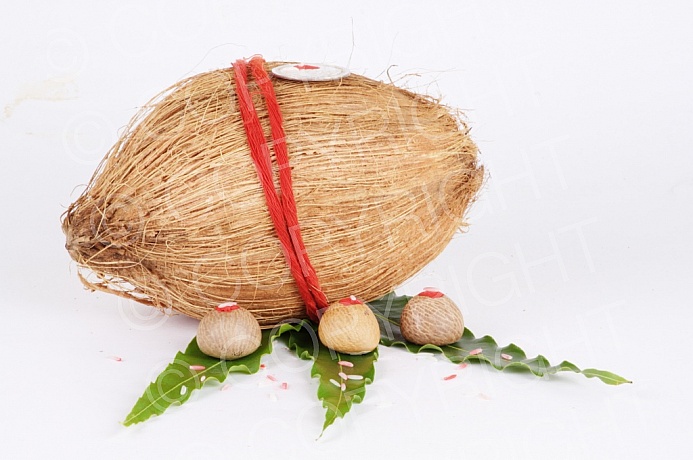 What is the significance of using nãrikel in pooja?

The coconut (Gujarati. – nãriyel, Sanskrit. – nãrikel) is used as an auspicious pujã offering. It has several virtues and underlying sentiments.

Its important virtue is that the coconut tree takes in salty water and gives sweet and nutritious water through the fruit. Similarly, man is inspired to mould himself by eradicating his ‘saltish’ swabhãvs and to become sweet within.

In ancient times, Vishvamitra rishi created the coconut, to be used as an offering to appease the deities to halt animal sacrifice. In this manner the rishis propounded ahimsã during ritual offerings.

Since then the coconut has become a symbol of sacrifice. Therefore in any auspicious venture or ritual, a person offers a coconut to a deity with the sentiment, ‘I offer myself at your feet’.

It is offered to a deity on certain lunar tithis such as Purnimã and Ekãdashi, often with a small packet of sãkar (sugar crystals) and 1.25 rupees in coin form. In some mandirs and sampradãys, the pujãri cracks the coconut and offers one piece to the deity and returns the other piece to the devotee as prasãdam. It is commonly offered to Hanumanji on Saturdays.

It is placed on top of a kalash, with mango or betel vine leaves during kalash sthãpan in pujã rituals.

Coconut water is also used during abhishek in some south Indian temples.

It is cracked on the doorstep of a new building during Vãstu pujã and during pujan of new heavy machinery. This is after performing pujan of Thãkorji and imprinting red chãndlo on the shrifal, while chanting shantipaath and other Vedic mantras and shloks. The water from the cracked shrifal is then sprinkled inside, as well as on those present, to confer purity and auspiciousness.

During a marriage proposal, it is sent by the girl’s parents to the proposed groom. If he accepts it, then the engagement is fixed. This is known as ‘having accepted the nãriyel’.

All parts of the coconut and tree are useful, to make: thatch roof, mats, stick brooms, screens, coir rope and edible oil. The soft or dried flesh is often sliced into chips and offered with sãkar as prasãdam

It is also tied to a bier in six places before taking a body for cremation.

Excerpts from a talk by Sri Sri Ravi Shankar:

If you go to any Hindu temple, they always keep a coconut. Do you know why? A coconut is a symbol of human life. It is a shock absorber and that is how we should be in our lives, shock absorbing. A coconut falls from such a height but it does not break because it absorbs the shock. Our behavior should be like shock absorbers in the society, so that nobody can hurt our mind or emotions. Our body needs to be hard like the shell of a coconut and the mind should be like the kernel inside, soft and pure white and bringing feelings like the sweet water inside. So this is why they break a coconut in the temple and they keep it to signify, ‘Dear Lord, may my life be like a coconut, body firm and mind soft, pure and clear.’

Not the answer you're looking for? Browse other questions tagged belief worship rituals .

15
What is the significance of breaking a coconut in Hindu rituals?
7
Why Hindus write Shubh and Labh with a Swastika?