Why Hindus write Shubh and Labh with a Swastika?

These terms are generally written besides Lord Ganesha's image. Not only this, it is also written on marriage invitations and Diwali greetings.

The terms are often associated with swastika symbol (well, most of the time).

So why they write the terms Shubh which means auspiciousness and Labh means Profit? 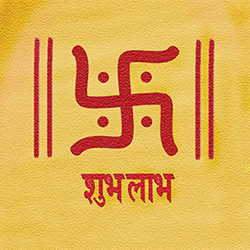 To understand this, you should know the actual meaning of lord Ganesha's story .

Once mother Parvati wanted to take a bath, there were no attendants around to guard her and stop anyone from accidentally entering the cave. Hence she created an image of a boy out of dirt and infused life into it, and thus a little boy was born. Parvati asked the boy not to allow anyone to enter the house, and the boy obediently followed his mother's orders.

Explanation: So in the story of Ganesh’s Birth, Parvati is depicted as Universal GOD and Shiva is the Soul in the body.

After a while Shiva returned from outside, and as he tried to enter the house,

Explanation: The force stopping Soul(Shiva) from reaching Universal GOD (Parvati) is the little child and that is the EGO of the person. EGO is explained in different ways. Will not go in detail on what EGO is in this post. Just know that EGO is so strong that it can stop Shiva(Soul) from reaching Parvati (Universal GOD).

At last Shiva severed the head of the little boy head with his trishula.

Explanation: The only way for Shivato meet Parvati is to cut the head of EGO. i.e Bow the head to the Universal GOD. When EGO is out of the way Shiva(Soul) and Parvati

When Parvati came out and saw her son's lifeless body she asked that Shiva restore the boy’s life. A Brahma suggested that Shiva replace the boys head with the first living being that came his way which lay with its head facing north. Shiva then sent his celestial armies (Gana) to find and take the head of whatever creature they happened to find asleep with its head facing north. They found a dying elephant which slept in this manner, and after its death took its head, attaching the elephant's head to the boy’s body and bringing him back to life. And thus Ganesha is Born.

Explanation: In a living person the EGO is gone and therefore the Soul(Shiva) of the person has met the Universal GOD(Parvati). The energies activated in the person now is that of Ganesha. Meaning that any action taken by a person while connecting the Soul to the Universal GOD will remove obstacle. The elephant head is depicts the removal of obstacles.

Ganesha is married to 2 sisters Riddhi and Siddhi.

Explanation: In that state Ganesha i.e. Shiva(Soul) and Parvati (Universal Soul) meeting in a living person, interacts with the world. In this world one can only give or/and take from someone. i.e. Ridhi and Sidhi. So Ganesha (living person) is married to the world of giving and receiving. The living person is married to either taking or giving something to this world.

Ganesha has 2 children from Riddhi and Siddhi..Name of the children are Shubh and Labh

Explanation: So a living person in the state of Ganesha interacts with the world Riddhi and Siddhi there is an output from it that interaction i.e. He gets SHUBH LABH or PURE PROFIT.

Shubh and Labh ask their parents for a sister and they get a sister names Santosh.

Explanation: So from the interaction with the world as Ganesha a person gets SHUBH LABH (PURE PROFIT) and from the PURE PROFIT he gets SANTOSH or CONTENTMENT.

That is the purpose of Life. To get CONTENTMENT in every action that one takes in Life.

In a living person the Soul (Shiva) is always trying to meet the Universal GOD (Parvati).

When the head of EGO is removed Shiva(Soul) and Parvati (Universal GOD) meet thereby creating igniting the energies of Lord Ganesha.

As Ganesha when a person interacts with the world as, giving (Riddhi) and taking (Siddhi), then the output is Shubh (Pure) Labh (Profit).

From Shubh Labh (Pure Profit) the person gets Santosh (Contentment).

When one prays to Lord Ganesha then one is asking to connect to the Universal Soul to remove obstacles and to give us contentment. All the rituals are fully aligned to this principle.

It is a practice to write Shubha Labha along with the image of Ganesha. Shubh is ‘auspiciousness’ and Labh is ‘Profit.’ The two words are mainly written by traders, business men, shopkeepers etc on account books and in front of the shops. Some Hindu cultures consider Shubh and Labh as the sons of Ganesha.

So writing Shubh Labha is to gain auspiciousness and Profit and its also symbolic to Lord Ganesha's children name too.

Not the answer you're looking for? Browse other questions tagged belief astrology .

8
What is the significance of nãrikel (coconut) in pooja?

11
Do Hindus intermarry with other religions?
10
Why Hindus worship Peepal Trees? (Ficus religiosa)
26
Why not sleep with your head facing North direction?
3
Why do Hindus worship vehicles on the day of Dussehra?
8
Why children born in Moola, Ashlesya, Jyeshta and Maga Nakshtras (stars) are considered inauspicious?
3
Why do Hindus only count Umbra as the eclipse?
7
Why do some Hindus say "ram ram" twice?
2
Why Priest give flowers and again take them back with money?