I learned from internet that there are 16 shastras, But I didn't find valid source for list of those shastras. Can you tell me please the what are those 16 shastras? Are there any upa-shastras (sub-shastras) like upavedas and upapuranas?

All the scriptures have the supreme Lord as their purport. Here the different prasthAnas are dealt with in brief.

The Vedas are four in number—Rgveda, yajurveda, sAmaveda and atharvaveda. The vedAngas are six—shikShA (science of pronunciation), yyAkaraNam (grammar), niruktam (etymology), Chandas (metre), jyoutiSham (astronomy and astrology), and kalpa. The upAngas are four— purANa, nyAya, mImAmsA and dharmashAstras. The upapurANas are included in the purANas, vaisheShika is included in nyAya, vedAnta in mImAmsA, and mahAbhArata, rAmAyaNa, sAnkhya, yoga, pAshupata, vaiShNava, ertc., are included in dharmashAstra. Thus altogether there are� fourteen vidyAs. So has it been said by sage YAjnavalkya—

“The purANas, nyAya, mImAmsA, dharmashastra and the Vedas (including vedAngas) together constitute the fourteen vidyAs”. 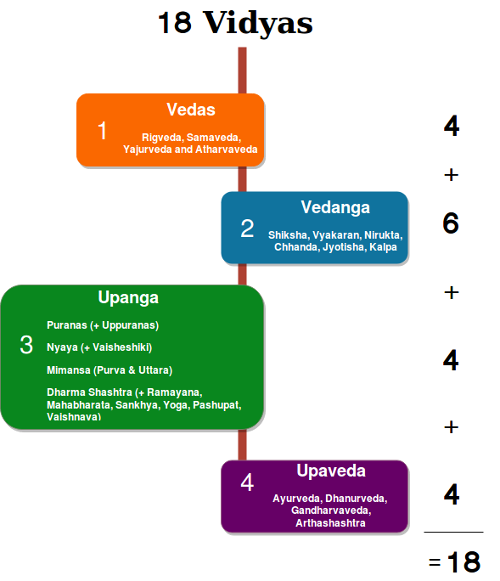 There are 18 Vidyasthanas (Indian knowledge systems or Branches of knowledge) These 18 vidyasthanas are as follows.

These are called Angi or the main sources of knowledge.

In addition to these are four more Upa-Vedas, each related to one of the four main vedas. These are

So, in total there are 18 vidyasthanas or Indian knowledge systems.

Here is a scriptural reference (which is missing from all the other answers) for the 14 Vidyas. It's from a Shakta Tantric scripture called Jnanasanakalini Tantram.

It's a small text comprised of only 107 verses.

The first five verses are as follows:

Mahadevi questioned Maheshvara, the Deva of all devas, the World Guru, sitting on the peak of Mount Kailasha: Speak to me of knowledge! (1)

From the syllable Om comes everything, the fourteen vidyas, mantra, puja, dhyana, action and non-action. (4)

The four vedas, the six limbs of veda, mimamsa, nyaya, dharma shastra and puranas are the fourteen Vidyas. (5)

For the time being unable to find scriptural references for the remaining four though.

These 14 VidyAs are also mentioned in the 1st chapter of Yajnavalkya Smriti.

The 14 VidyAs pertaining to Dharma are -- PurAna, NyAya, MimAngsA, DharmashAstra, VedAnga (6 of them) and the Veda (4 of them). (Chapter1, verse 3)

So, this verse too is talking about 14 Shastras and not 16.

26
What are the Hindu scriptures which every Hindu should abide by?
12
What are the different sources that describe vedangas or limbs of the vedas?
14
Is the hierarchy of scriptures discussed in any scripture or in the works of Acharyas?
11
Scriptures: 64 Arts and 14 Sciences
9
What are the Vedas technically? How can Upanishads be called Vedas when some parts are neither revelations nor hymns dedicated to any specific deity?
6
Is BG 16.23 referring to Vedas or dharma śāstras?
9
Which is the earliest reference to Upavedas?
4
What are some of the devotional works by Madhusudan Saraswati?
5
What are the primary authentic sources of Hinduism?
5
Is the Arthashastra of Chanakya same as the Upa Veda Arthashastra?
See more linked questions

6
Who are Gandharvas?
6
What are the ancient & modern career options for a Kshatriya?
12
Which Shastras are more authoritative,the Smritis(Dharma Shastras) or the Puranas?
4
What kind of scripture is Vyasa's BrahmaSutras technically?
12
What are the principle texts/Scriptures of Trika or Kashmir Shaivism?
9
Which is the earliest reference to Upavedas?