One of the most popular forms of Shiva worshipped in South India is the sage Dakshinamurthi, whose name literally means "the South-facing form". Dakshinamurthi is the subject of the famous Dakshinamurthu Stotram, a hymn commonly attributed to Adi Shankarcharya (although this is disputed) which says this:

It is strange to see the very old disciples and the very young teacher, who sit under a banyan tree, with the teacher always observing silence, and the students getting all the doubts cleared. 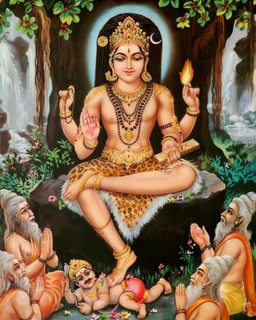 The story as I understand it is that Shiva incarnated as a young sage named Dakahinamurthi, who sat under a banyan tree and silently imparted wisdom to the Sanatkumaras, four sages who are mind-born sons of Brahma.

My question is, what scriptures mention the sage Dakshinamurthi? I assume he's mentioned in various Shaiva Agamas, but it's very hard to date Agamic texts. And he is discussed in the Dakshinamurthi Upanishad, but that's believed by many to be a late text.

Is he discussed in the Puranas? All I've found is a passing reference in this excerpt from the Narada Purana, which says that a hymn to Shiva called the Shiva Nyasa was heard from the gods by Dakshinamurthi:

The deity of this (nyasa) is Ardhanarisha, the sage Dakshinamurti and the metre is Gayatri. The application of this mantra is for attaining everything.

I suppose it's akin to how the sage Narayana, an incarnation of Vishnu, was the seer of mantras to Vishnu like the Purusha Sukta of the Rig Veda, which I discuss here.

Does anyone know any other scriptures which discuss Dakshinamurthi?

Dakshinamurty form of Lord Shiva is described in Suta Samhita of Skanda Purana in Mochak Kathanam of Mukti Khanda. Here is the description of form:

The one bearing Ganga in his head, Shiva; is silent, with his hairs tied. He can give anything to anyone and he is full of all attributes. He is sitting in Virasana Position and wearing a Vedic Yajnopavita. He is covered by the ashes and his ornaments are snakes. He is sitting in tigerskin made for sitting in Yogic position. He is giving AtmaJnana to all creatures through silence. His left foot is in right thigh and his hand is on JnanaMudra. He is the embodiment of all jewels of knowledge. He is giving all tatwa just through his eyes. He himself is in fully trancsendental blissful state, transcending even Shakti. Sages which are like embodiment of Dharma tree and who have transcended even Vedas, they are sitting around that Banayan tree. Ishana himself is the all knowledge, he is the Lord and also unmanifested, He manifests just by the sound Om, the one who is sitting in Lotus. Providing knowledge of Self he is always the liberator of self. Such is Rudra and his compassion who always wants good for creatures. The one who do Austerity for him is sure to have fulfilled his desires, He is that Dakshinamurty divine and is the cause of this whole world. The great devotees salute him by keeping head on earth. I salute him and adore him with my limited abilities. Rudra I surrender to your form which is facing south. I worship again and again through my devotion. Oh Lord Mahadeva in the form of Dakshinamurti, you provide knowledge of self, thus intelligent worship you. Thus for liberating creatures from this cycle of Samsara, oh Lord of Ambika, you take the form of Dakshninamurti being like a fruit for all.

Lord Dakshinmurty is also described briefly in Lalita Sahasranama of Brahmanda Purana. There Shakti is called Dakshinmurty Rupini as Shakti is Shiva herself and Shiva just remains in unmanifested state without Shakti; (it is actually through Shakti Shiva assumes forns:)

You are independent. You are the presiding deity over all Tantras. You are the who takes form of Dakshinamurty who is adored by Sanaka and other sages and who provides knowledge of Supreme.

The form resembling Dakshinamurty form is also described in Srimad Bhagvatam from here although the name Dakshinmurty is not used:

Dakshinamurtaye should be uttered first, then homage unto you who reside at the root of the banayan tree, obeisance unto him who is deeply engrossed in meditation, then to Rudra and Sambhu. Tãra (Om) and Hrim should enclose the mantra. The mantra consists of thirty six syllables. It is the bestower of all desired gods. Suka is the sage and Anushtup is the metre. The deity is Sambhu Dakshinãmurti. There is a lofty banyan tree on the ridge of the Himãlayas frequented by Siddhas and Kinnaras. The tree has fruits shining like rubies. It has shadowed sunlight by its far extending branches. The full-blown trees are embraced by the clusters of creepers in full bloom. The place has been rendered cool by the winds blowing over the mountain streams Howing out of the rock crevasses. Groups of cdestial damels sing while the flocks of peacocks dance. Different quarters are resonant by the cooing of cuckoos. The region is frequented by the animals which have eschewed their mutual animosity. It is beautified by fragrant flowers of both aquatic and terrestrial origin. lt is conti- nuously and happily resorted to by the sages, Suka and others. It is frequently supervised by the gods, chief of whom is Indra and who are accompanied by their womenfolk and others. The banyan tree is beautilied by the thickly grown emerald-like leaves. It is embellished as though with hanging ornaments made of the nine precious gems. It is a wonderful tree the shade of which is capable of dispelling worldly distress. Shiva is seated at its root in an auspicious throne set beautifully, studded with jewels. His embellishments are immeasurable. His face resembles the autumnal moon. He resembles the mountain Kailasa, has three eyes and the crescent moon decorating his matted hair. He is seated in the heroic posture. He holds the posture of the hatchet, deer and has placed the delicate hand on the knee. He has kept a serpent firmly fixed under his arm pit. He should meditate on Siva in his pleasant mood.

Not the answer you're looking for? Browse other questions tagged shiva puranas avatars adi-shankaracharya .

18
How is 'Vishwa Virat Swaroop' of Lord Krishna described in Mahabharata?
9
Who is sage Ganaka, the seer of so many mantras to Ganesha?
8
What is the correspondence between Khandas and Samhitas in the Skanda Purana?
6
Lord Shiva as Adi Yogi taught Yoga to seven sages and in turn these seven sages spread across the world. Is this theory a new look to our mythology?
5
Is Shiva really Adi Guru of Yoga?
3
Is there any subtle explanation to Shiva's manifestation as Sri Dakshina Murty?
7
Why is dakshina murthy suppressing the demon Apasmara and what is his story?
3
Who thinks the supreme Shiva's only forms are Nataraja, Dakshinamurthi, and Ardhanarishvara?
2
Who are the "Pauranikas" who believed in 30 Tattvas and 8 Pramanas?

9
Who is sage Ganaka, the seer of so many mantras to Ganesha?
8
What is the correspondence between Khandas and Samhitas in the Skanda Purana?
11
What scriptures describe the story of Vishnu's general, Vishvaksena?
8
What scriptures describe Brahma's son Sanatkumara being reborn as Shiva's son Kartikeya?
4
Which Purana talks about the incident of Lord Shiva saving The Sage Markandeya?
3
Is there any subtle explanation to Shiva's manifestation as Sri Dakshina Murty?