Why is there a Damaru attached to Lord Shiva's trishul?

Why is a Damaru attached to the Trishul that Lord Shiva carries? What does that Damaru signify? 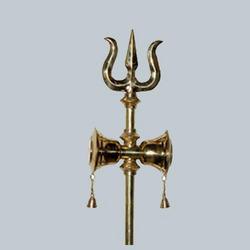 Shiva is often described as cosmic dancer and a great musician. Shiva's Tandavam is the cosmic dance and his Damaru (a small hourglass shape drum) represent the cosmic sound. It is said in Shiva Mahapurana that

the sounds from the damaru beats the the rhythm of the cosmic vibrations and the energy is activated by the divine Mother or Shakti.

The sound from damaru often is interpreted as the Pranavam and represent the *Shabda Brahma*n. Pranavam or OM is supposed to the precursor to all human languages.1

There's a very beautiful strotam which mimics the sound produced by damaru called Shiva Tandava Strotam by creating a rolling effect. The first couplet is —

This is how Swami Shivananda has explained about Lord Shiva in the book Lord Siva and His Worship, who himself was big Shiva worshipper

Lord Siva represents the destructive aspect of Brahman. That portion of Brahman that is enveloped by Tamo-Guna-Pradhana-Maya is Lord Siva who is the all-pervading Isvara and who also dwells in Mount Kailas. He is the Bhandar or storehouse of Wisdom. Siva minus Parvati, Kali or Durga is pure Nirguna Brahman. With Maya (Parvati) He becomes the Saguna Brahman for the purpose of pious devotion of His devotees.

The wearing of the crescent moon on His head indicates that He has controlled the mind perfectly. The flow of the Ganga represents the nectar of immortality. Elephant represents symbolically the Vritti, pride. Wearing the skin of the elephant denotes that He has controlled pride. Tiger represents lust. His sitting on the tigerŌĆÖs skin indicates that He has conquered lust. His holding deer on one hand indicates that He has removed the Chanchalata (tossing) of the mind. Deer jumps from one place to another swiftly. The mind also jumps from one object to another. His wearing of serpents around the neck denotes wisdom and eternity. Serpents live for a large number of years. He is Trilochana, the three-eyed One, in the centre of whose forehead is the third eye, the eye of wisdom. Nandi, the bull that sits in front of Sivalinga, represents Pranava (Omkara). The Linga represents Advaita. It points out ŌĆ£I am one without a secondŌĆöEkameva Advitiyam.ŌĆØ

The Damru symbolizes the expansion and collapse of the universe, the cosmic vibration. This is also related to the cosmic sounds:

Damru symbolizes the Universe which is always expanding and collapsing. From an expansion it collapses and then it re-expands, this is the process of creation. If you see your heartbeat, it is not just one straight line but it is a rhythm that goes up and down. The whole world is nothing but rhythms; energy rising and collapsing to rise again. So the damru signifies that. Look at the shape of the damru, from expansion it collapses and again expands.

Excerpts from a talk by Sri Sri Ravi Shankar: https://xa.yimg.com/kq/groups/17184919/.../understandingshiva.pdf

Not the answer you're looking for? Browse other questions tagged shiva symbolism symbols .

5
What does Shiva purana says about Shiva wear tiger skin and hold a trishul with damru?

15
Why does Lord Ganesha have a mouse as his vehicle?
9
Why do we see Lord Shiva under the feet of Mother Kali?
11
Why is Moon on Lord Shiva's head only shown as crescent?
8
Why is Lord Shiva called NilaLohita?
15
Is it true that Lord Shiva's description is different in Vedas?
1
What are the specific qualities of Lord Shiva's trishul?