Why permit Anga pradakshina but not Saashtaanga Namaskaram for women?

Why are women not permitted to practice the Saashthaanga Namaskaram but are permitted Angapradikshana? I refer to these two practices in particular as I was told that a woman's womb is holy and may not touch the ground.

The Sashatanga is where one lies down flat on the stomach with eight limbs touching the ground. The eight limbs are chest, head, hands, feet, knees, body, mind, and speech. This namaskaram is generally done by men. 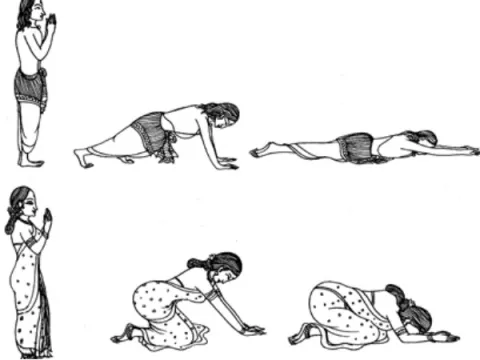 Suryanamaskaram, (sun salutation) is a series of yoga poses meant to give praise to the sun. This is a tradition, which allows eulogising Sun as God and getting health benefits due to exposure to Sun and doing various asanas.

Why The Women Is Not Allowed to do the Sashtanga Namaskaram?

In Angapradikshana devotees lie prostrate and roll around the temple. Generally this pradakshina will be done with wet clothes. 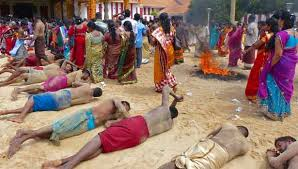 I don't think in this pradakshina also pregnancy women are allowed .

In Bihar, during Chhath puja time, women after getting their desires fulfilled, perform a prostration march as they head for the river banks. So prostration is not prohibited in all places and at all times. 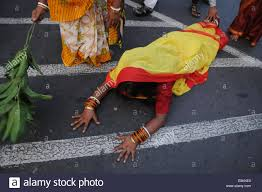 Not the answer you're looking for? Browse other questions tagged practice .

39
Why do some Hindus, especially brahmins, not eat onion or garlic?
12
Why did Hindus practice untouchability?
17
What is the truth behind the practice of Sati? How is it related to Hinduism?
9
Why do women not wear Yagnopaveetham (Janeu or Poonal)?
2
Which Pancharatra text describes Yogam?
6
Are different ways of salutation (pranaam) just cultural or prescribed in scripture?