Is Swaminarayan an incarnation of any God?

I want to know the following:

As far as I know, Swaminarayana was a saint. One of the most famous temples dedicated to him is the Aksharadham temple in Delhi. I imagine it is one of the largest temples in the country. (Personally, I have been there, it makes for a very nice darshana for anyone visiting Delhi).

Here is a timeline of his life as mentioned on the temple website:

October 28, 1800 – Initiated into the sadhu fold in Piplana by Ramanand Swami.

November 1803 – Visits Bhadra and upon meeting Mulji Sharma again, reveals him to be Aksharbrahma.

January 20, 1810 – Initiates Mulji Sharma as Gunatitanand Swami at the mahayagna in Dabhan.

March 12, 1812 – Reveals the glory of Aksharbrahma Gunatitanand Swami during raas- lila in Sarangpur.

November 21, 1819 – Begins the discourses recorded in the Vachanamrut.

March 19, 1821 – Introduces Gunatitanand Swami as Aksharbrahma after applying a tilak-chandlo on his forehead.

July 25, 1829 – The discourses recorded in the Vachanamrut are completed.

Yes, Swaminarayan is GOD himself.

Bellow I have mentioned quotes from Purans written by Ved Vyas, decide yourself.

“I (Krushna) take birth on this earth every time when Dharma diminishes and Adharma intensifies.”

In this Shloka, Lord Krishna has mentioned that He will take and had taken birth (incarnation) every time whenever Kings, so called Dharmacharya, religious scholars deceives public in name of Dharma – Sadachar. This clearly means that there is no restriction of number of incarnation. In Shrimad Bhagavat, few of incarnations has been mentioned just to describe different Leela of these incarnations. This does not mean that Lord is bond to take only those incarnations and other incarnations will not happen on this earth.

Sinful people of different casts (in western India) like Ahir (Shepherd), Kathis (of Kathiawar – Saurashtra), Kirat, Hun, Muslims, Andra, Kanbi (Patels), Khavas will take His shelter and He will vanish their sins to make them pious. I pray such Bhagvan.

In Satyug, I will take birth as Dattatrey, In Tretayug, I will be Ram, In Dwapar I will be Krushna and in Kaliyug, I will be Son of Vrush (Vrushatmaj) - Hariprasad Pande and will be known as Swaminarayan.

I will take birth with name of Sahajanand swami and will take all my disciples to my divine abode – Vaikunth.

All sins vanishes by enchanting my name. I will take birth as son of Hariprasad Brahmin and will be known as Hari on this earth. 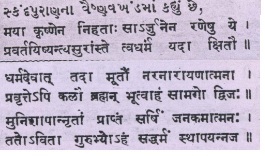 Along with Arjun, I (as Krushna) have eradicted the crooked people. I have given moksha to Asura (crooked people) killed by Arjuna and died seeing me. I have given moksha also to the Asura who had been killed by me. But all other Asur Kings who had been killed by Arjun and have evil wishes in his Jiv, will rebirth in Kaliyug and will prevail Pakhand. At that time in Kaliyug, I will take birth in Samvedi Brahmin cast due to curse given by Durvasa to Narnarayandev. I will re-estabilsh “Sadadharma” and will protect all Rishies – Saints along with my mother Bhakti and father Dharma.

There is one more reference Shrimad Bhagvat, I am not able to find right now, will add later once I found it, I am just writing in my word:

it is during the time of Krishn Uddhav Samvad. where he is trying to tell uddhav, that: this life is gone in the removing adharm from the earth, establishing dharma is yet pending. and mentioned udhav that go to badrikashram. and when there is time we'll come again and establish the dharma. and stuff like that.

Some details about swaminarayan bhagavan to match above quotes from Ved Vyas.

Left Home: At tender age of 11 years Travelled around 12000 KM barefoot in 7 years starting from Chhapaiya to Himalaya – Mansarovar – Assam – Jagannathpuri, Kanyakumari, Pandharpur to Loj – Gujarat. He was named Nilkanth varni during his travelling – Vicharan.

Names given at time of taking Diksha: Sahajanand Swami, Narayanmuni.

Meaning of SwamiNarayan mantra aslo indicates he is god him self

There can be many meaning of Swaminarayan mantra, out of that one I'll explain here:

Here in the mantra Swaminarayan: Narayan is the noun and Swami is adjective. e.g. The Great King Alexander. where great and king is adjective of noun Alexander.

In hinduism every mantra has a some Dev or Avatar associated with it.

We call Swaminarayan as maha mantra, why since it is the mantra which directly indicates the supreme lord. By chanting Swaminarayan mantra we are directly making connection to the Bhagavan.

1) Swami Swaminarayan is a Gujarat based saint & yogi.

2) Hindus have tendency to name every saint & yogi as a incarnation, without understanding the terms.

3) The term or titles are given to saints & yogis, only by their gurus or other exalted saints, not by common men like us.

4) Gujaratis consider him to be an incarnation

6) Lord Buddha is also given title or mantle of Lord Vishnu's incarnation. Which when analysed correctly with timelines, it was given subsequently, else there are certain major differences between Lord Buddha's preachings & Hinduism.

7) That is why, Sri Adi Sankaracharya came and revived the original Hinduism and enforced authority of Vedas & Upanishad, relegated to an extent by Buddhism.

8) Sri Adi Shankaracharya brought clarity of scriptures and its importance.

9) Being given the title & mantle of "Jagat Guru" he is the true saint & yogi taking birth on mother earth.

11) Sri Adi Shankaracharya touched the philosophical aspects and gave picture of creation itself unlike any other saint or Yogi, hence, while reading the buddhist & advaita texts, one can note the clarity of Sri Adi Shankaracharya ofcourse, it is not to diminish that this is superior or inferior, but a scholarly comparison, which an ordinary man should not be concerned with unless he reaches that mental stage.

Not the answer you're looking for? Browse other questions tagged scripture saint .

1
Who is swaminarayana?
10
Have any Swaminarayan commentaries on the Brahma Sutras been translated into English?
18
Who is the Samaveda-singing Brahmin incarnation of Vishnu prophesied in the Skanda Purana?
3
Ashwathama and Swaminarayan
3
In which section of the Brahmanda Purana, is the advent of Swaminarayan supposedly predicted?

6
Are there any references to the Brahma Samhita before Chaitanya Mahprabhu?
21
How old is earth according to Hinduism?
22
Is there any scripture that tells story about Lord Vishnu and MahaVishnu?
5
What is the story of Kartikeya's sons?
4
Are there any events when Lord Shiva tested his devotees?