How much does the divinely created statue of Ramanujacharya resemble him?

The Alwars are a group of 12 ancient Vaishnava saints who lived in Tamil Nadu and are famous for their poetry in praise of Vishnu. The collection of their 4000 poems, known as the Naalayira Divya Prabhandam, is considered by many to be the "Dravida Veda", or South Indian Veda. The Alwars are crucially important figures in the history of Vaishnavism; it's the beliefs and principles embodied in the Alwars' poems that ultimately gave rise to the Sri Vaishnava sect (of which I'm a member).

Now as I discuss in this answer, one of the most famous Alwars was Nammalwar, who spent his short life under a Tamarind tree in the town of Kurugur, modern-day Alwar Thirunagari. Despite his young age, however, Nammalwar had a disciple, another Alwar called Madhurakavi Alwar, who was an old man. One of their notable stories goes roughly as follows. One day Madhurakavi Alwar asked Nammalwar for a small statue of Nammalwar so he could remember him. Nammalwar instructed him to boil water from the nearby Tamaraparni river, and when Madhurakavi Alwar did so a statue emerged. Nammalwar said that the statue was of a future Vaishnava Acharya who would follow in Nammalwar's disciplic succession. To this day, the statue is there in the Bhavishyadacharya (future Acharya) temple in Alwar Thirunagari.

Sri Vaishnavas believe that the statue is of the famous Sri Vaishnava Achararya Ramanujacharya; he was taught by five disciples of Yamunacharya, grandson of Nathamuni, who is said to have been a shishya of Nammalwar as I discuss here. My question is, how much does the statue resemble Ramanujacharya? Thankfully, Ramanujacharya's body has been preserved in the famous Udayavar Sannidhi in the Sri Rangam temple, so it's possible to easily compare the two with photos.

They're pretty close. They have the same long low-hanging ears, round face, and thick fingers. Here is the statue found in the Bhavishyadacharya statue in Alwar Thirunagari: 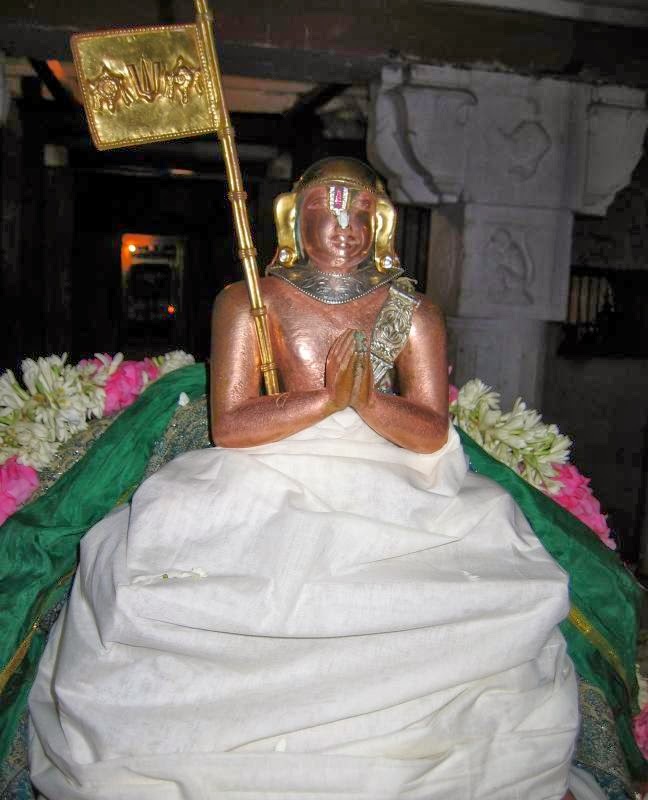 And here is the actual body of Ramanujacharya preserved in the Udayavar Sannidhi in Sri Rangam: 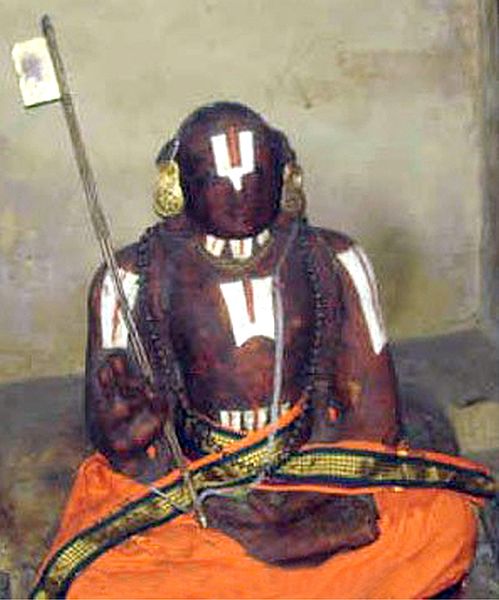 Note that the statue is quite small.

Not the answer you're looking for? Browse other questions tagged history vaishnavism sri-vaishnava alwar ramanujacharya .

12
What is the significance of Satagopuram?
12
What is the secular account of the compilation of the Alwars' poems?
8
Do scriptures mention about Srimad Madhvacharya being an avatar of Lord Vayu?
3
Worship of Shree Ramanuja while he was in his body?
1
Where is Ramanujacharya's Jeeva Samadhi located?

12
What is the secular account of the compilation of the Alwars' poems?
6
Was the Sri Vaishnava Acharya Nathamuni an incarnation of Ganesha?
9
Which Alwars mention the gods whom they're incarnations of?
3
Why does Thirumazhisai Alwar say the Pandava Thoothar statue of Krishna is older than him?