I was looking at some facebook posts and below is a pic I found in a post. 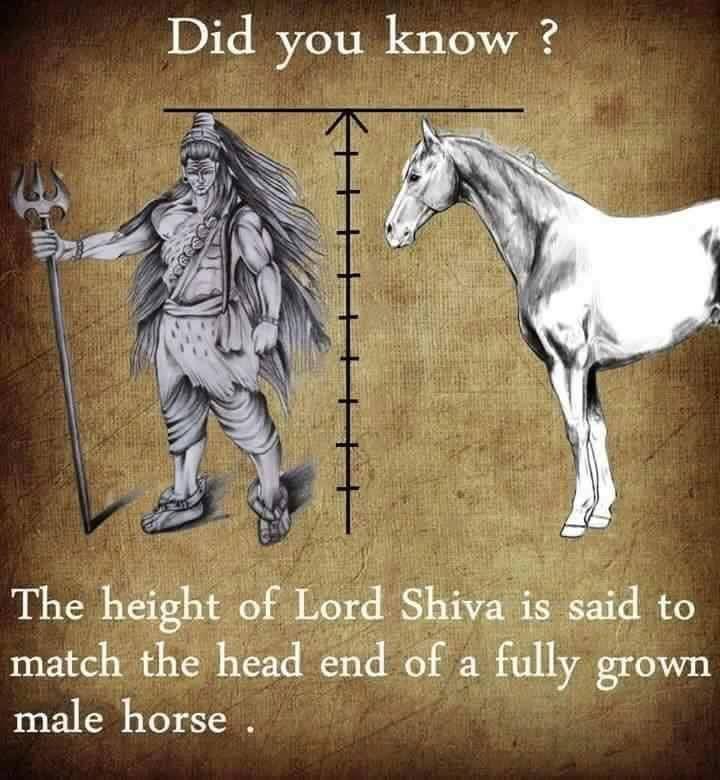 Do we have any providence about this in hindu puranas??

Or someone has just put this without any knowledge or for fun or getting likes on facebook?

Reset to default
11
Want to improve this post? Add citations from reputable sources by editing the post. Posts with unsourced content may be edited or deleted.

I think all this stuff about height about Shivji is misguided. As Shiv puran has it.

When Vishnu and Brahma couldn't decide who was greater among them, they saw a pillar. Its end couldn't be seen. So it was decided that the first one to find its end would be greater amongst the two Gods. Actually God Shiva appeared as in an infinite linga (pillar). And Vishnuji tried to find the bottom of the Linga while Bramhaji tried to find its top. Both couldn't and Brahma ji lied about finding the end and was cursed.
Lord Shiva tells them that it's his true form. He has no beginning and no end. He was never born nor could he die. Thus infinite pillar conveys the infinite nature of Shiva.

So, anything about the height of Lord Shiv is completely stupid.

It has two different aspects.One form of Shiva is about Adiyogi,the description is that his head matches with head of full grown horse.It can be exaggerated as 7feet. There's another dimension for word Shiva,it means that which is not.Which is not is not a thing,just empty space. So in that context there's no end and no way you can find an end to this emptiness. So the story of finding the pillar of Shiva is about finding an end to this empty space which isn't possible,so it is packed in such story.This culture is such dialectical and the all the Puranas you find are packed like that.

This picture is based on a true fact. This height is actually of the human form of Lord Shiva during the wedding ceremony with Parvati. I came to know about this fact from a video by Sadhguru posted on YouTube. As far as I can recall the title of the video, it should be "Shiva Parvati's Marriage" uploaded either by Sadhguru or Isha Foundation.