Yogic techniques to meditate for an indefinite period of time without any needs?

Are there any references in Vedas or Yogic scriptures about techniques for meditation. We keep hearing how Siddha Yogis are able to meditate constantly without attending the needs of the physical body. How can one attain the spiritual level of such yogis? How are they able to overcome bodily needs which can be fatal if ignored (by a normal human being), after a certain period of time?

Is this spiritual knowledge available in the scriptures?

One such example is "Ram Bahadur Bomjon". Although he is a Buddhist Monk,but there are plenty of yogis in Sanatana Dharma, who have been able to achieve same heights.

Ram Bahadur Bomjon (Sanskrit: राम बहादुर बामजान) (born c. 9 April 1990, sometimes spelled Bomjan, Banjan, or Bamjan), also known as Palden Dorje (his monastic name) and now Dharma Sangha, is from Ratanapuri, Bara district, Nepal. Some of his supporters have claimed that he is a reincarnation of Gautama Buddha, but Ram himself has denied this, and many practitioners of Buddhism agree that the Gautama Buddha has entered nirvana and cannot be reborn.

He drew thousands of visitors and media attention by spending months in meditation. 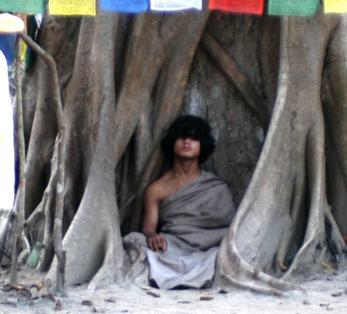 Such spiritual/yogic stamina is developed over years of practice, sometimes even lifetimes of practice. Reading books will not bestow this upon one. Please be wary of anyone(i.e. the false gurus) who promise the sun,moon and stars overnight. Patanjali yoga sutras detail all the stepping stones to attaining such spiritual heights. But it takes, discipline , faith ,forbearance and patient perseverance to get there. And being under the care of the right guru is imperative. I would advise against getting sucked into the charming vortices of popular, media-savvy "gurus" of today.

Specifically for you @Navik, I would recommend visiting Sringeri Sarada Muth once and having darshan of the Jagadgurus. A lot of your confusion will be resolved. If you are not an adherent to Smartha sampradaya, but are of Vaishnava faith, then the Ahobila Muth and the resident pontiff's darshan will help you. There are similar ancient mathas which have preserved the sanctity of sages over centuries, in all faiths. Visit them and you will certainly attain some level of peace. Best wishes.

Not the answer you're looking for? Browse other questions tagged yoga meditation vedic-rituals .

7
Can we meditate on Lord Shiva during Sutak period?
1
Is it bad to undergo Upanayana ceremony for the first time?
4
Is there any prerequisite for practicing Pranayama?
4
Does any yogic siddhi let a human to be simultaneously present at two different places physically?
4
How long to meditate for god to come and visit?
4
What would one realise if they meditated without knowledge of any Hindu metaphysics?
1
Which type of meditation one can do without Guru or any special guidance to advance spiritually?
2
Any side effects of doing pranayam and meditation wrongly or without Guru mentioned in scriptures?