Did Shree Hanuman have a child from Raavana's daughter SuvannaMaccha?

While reading about (legendary) creature called Mermaid, I stumbled upon 1 of the examples SuvarnaMaccha. 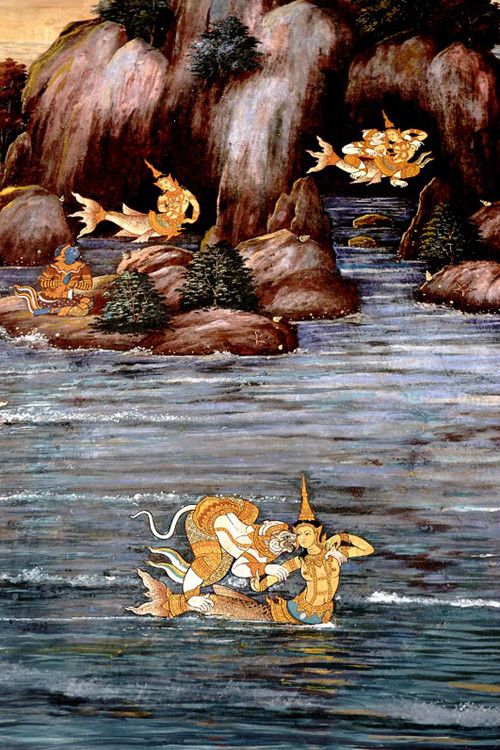 While building Ramasetu, this daughter of Raavana was an obstacle, but later fell in (mutual) love with Hanuman and had an offspring, Macchanu.

This story predominantly appears in Combodian, Thai and some other versions of Ramayana:

When several volunteers have stepped forward Hanuman leads them into the waves. They find a large number of mermaids underwater. As they watch, a new rock is tossed in. The mermaids living underwater take the rocks and carry them away. Hanuman looks for their leader. He spots lovely mermaid supervising the others. He swims towards her but she skillfully evades him. Time and again he begins an attack but it comes to nothing.

Hanuman finds he is falling in love with the creature. He changes his tactics and begins to silently woo her. She responds to him and soon they are together at the bottom of the sea.

Later, Hanuman asks the mermaid why she is stealing the rocks. She tells him that she is Suvannamaccha, a daughter of Ravana (the demon who had abducted Sita). When Ravana saw Hanuman's Vanaras building a causeway he instructed Suvannamaccha to stop it.

Hanuman tells the mermaid why he is building the causeway. He tells her of the abduction of Sita, the battle between Rama and her father Ravana, how they started to build a bridge, and in consequence was ordered to finish the causeway within seven days or pay with his life.

Suvannamaccha turned to Hanuman and her eyes were filled with love. No more, she said, would she prevent Hanuman from completing his mission. Her mermaids underwater would, in fact, return all the stolen rocks to the causeway.

They parted as lovers part but it was not to be the end for them. Hanuman had left a seed with Suvannamaccha and soon she would give birth to their son, Macchanu.

Is this really true?
Do other versions of Ramayanas also recognize Hanuman as Akhanda Brahmachari?

As per one version of Ramayana , bengali version kritiiwasi ramayana , hanuman has only one son magardwaja. It is when lord hanuman was returning after burning Lanka, he tried to clean his face with water of sea and the drops were drunk by fish and son of hanuman born.

Well, yes, the other Rāmāyaṇas texts, from the Indian languages, namely the Ānanda Rāmāyaṇa, and the Bhāvārtha Rāmāyaṇa recognize the Akhanda-Brahmachari nature of Hanumāna.

However, nevertheless they still maintain that he had a son named Makardhvaja, deriving birth from either Hanumāna's phelgm or sweat. Marriage and wife aren't involved, and hence Hanumāna remains a Brahmachari despite having a son.

As discussed in this QnA thread - Did lord Hanuman have a son?

is swallowed by the Makara/Makardhvaja's to-be Mother, which leads to the birth of Hanumāna's son.

Yet, Hanumāna is said to be a Brahmachari, as he himself notes in the Yuddha Kānḍa of Bhāvārtha Rāmāyaṇa (by Santa EkanAth in Marathi).

I was born with a Kaupīna (loin-cloth) due to the favour of Śrī Rāma, (and hence by nature being a Brahmachari), I cannot dare enjoy a women in my dreams even. And Since I have never been intimate with a women, how can you (i.e. Makardhvaja) possibly be my son? You're tainting your mother with such allegations.

22
Why did Lord Hanuman decide to spend his life as a celebate?
17
Did lord Hanuman have a son?
3
Was Sri Hanuman a married person?

8
Did Lord Rama exile Maa Sita?
13
Does Hanuma actually know Ravana's wife Mandodari by her name when he sees her the first time?
15
Is sitting on a camel in a dream inauspicious?
13
Hanuman and the highest state of Sri Rama bhakti
15
Sahasra Mukhi (Thousand Faced) Raavana Killed by Sita
12
Who is Suvarchala? Is she wife or daughter of Sun God?
7
Questions regarding Jewellery of Mother Sita according to Valmiki Ramayana
4
Why Lakshmana did not tell the name of Ravana to Hanuman even he knows?
6
Did Ravaan kill Surpanakha's husband?