Where is the Shanti Mantra for Sri Rudram mentioned in Scriptures (Vedas/Puranas)?

The Shanti Mantra for Shri Rudram is as follows:

but I cannot find its source nor its true meaning. Please give me meaning and location in scriptures.

a The maker of the sound 'Him' is Vayu, the Prastotr is Agni, the Saman is Prajapati, the Udgatr is Brhaspati, the subordinate singers are the All-gods, the Pratihartrs are the Maruts, the finale is Indra; may these gods who support breath bestow breath upon me.

b All this the Adhvaryu, as he begins, begins for the Udgatrs; 'May these gods who support breath bestow breath upon me', he says; verily he bestows all this on himself.

c May Ida who summoneth the gods, Manu who leadeth the sacrifice,

d May Brhaspati recite the hymns and acclamations.

e The All-gods are reciters of the hymns.

f O earth mother, do not harm me.

h May the gods aid me to radiance, may the Pitrs rejoice in me.

As you can see here, this mantra is one of "[t]he Mantras for beginning the Stotra and the Pratigara". Let me explain.

The use of part of the mantra is also described in this excerpt from the Shankhyana Shrauta Sutras:

In this manner having summoned (the deities) he sits down with his knees raised and mutters, after having touched the earth with the span of his right hand: "May I not be separated from this firm standing, O Mother Earth. Hurt me not, scorch me not. I shall think what is sweet, wish what is sweet, engender what is sweet. I shall today utter words sweet to Gods, dear to men. Here do I by means of the fifteen-fold thunderbolt drive away my spiteful rival."

So to sum up, this mantra has no connection in the Vedas to the recital of the Rudram or Chamakam. People today may just use this as a Shanti mantra for the Chamakam because it's a mantra asking for blessings from all the gods. It would be similar to how the "gananam" mantra is often used nowadays as an Ahavaniya mantra in Yagnas, just because you're supposed to pray to Ganesha in the beginning of rituals. (Except the gananam mantra is not actually addressed to Ganesha, as I discuss here.)

It is (Shanti patha of) Shri Rudram Chamakam From Yajurveda

Where is it located in scriptures?

There are four shakha of Krishna Yajurveda

The Taittiriya Samhita— (TS) which consists of 8 books or kaandas, subdivided in chapters or prapathakas, further subdivided into individual hymns. Some individual hymns in this Samhita have gained particular importance in Hinduism; e.g. TS 4.5 and TS 4.7 constitute the Shri Rudram Chamakam, while 1.8.6.i is the Shaivaite Tryambakam mantra.

You can see Shri Rudram Chamakam Lyrics at HinduLiterature.org in various languages. 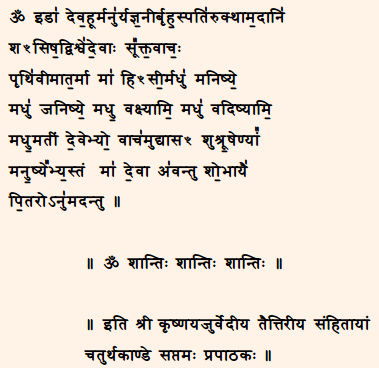 The Divine Gods are imploved through the mantras of Kamadhenu.
Manu does the Sacrifices, Bruhaspati recites the pleasant mantras.
Let these praises of Visva devas and mother earth save me from sufferance.
Let my pleasant thoughts bring forth pleasant actions and the resultant enjoyable fruits.
Let my Joyous offerings bear fine and worthy speech and my words please the divinity, make men lend their ears to gladden and Gods enlighten me and invoke my speech very powerful and my fore fathers feel excellently glad over it and bless me to perpetuate it.

There is pdf also available at Here.

Not the answer you're looking for? Browse other questions tagged vedas shiva puranas mantras translation-request .

19
Why are brahmins represented by names of Vedas?
15
When was Shiva a disciple of sage Angiras?
7
Why is Nahusha's last name Manava?
4
Where is this hymn in the Rig Veda?

10
Why do mantras usually end with Shantih Shantih Shantih (3 times)?
6
Why is Rig Veda Book 2 Hymn 23 Verse 1 not used for summoning or praying to ganpati?
3
Where can I find the Hindu scriptures in Sanskrit with Hindi rendition/translation?
6
Where do the Vedas support democracy?
2
Lakshmi mantra translation
6
Which scripture says that Vedas, Sri Rudram, Panchakshari mantra, and the word 'Shiva' are supreme?