What is the correspondence between Khandas and Samhitas in the Skanda Purana?

The reason I ask is because in this question I'm trying to find the scriptural basis for Shiva's incarnation Dakshinamurthi. This forum post claims that Adi Shankaracharya based his Dakshinamurthi Stotram on the Suta Samhita of the Skanda Purana. So are there any sources that list exactly what chapters of each Khanda belong to each Samhita

Or failing that, is there any English translation of the Skanda Purana which is divided into Samhitas rather than Khandas? Wikipedia says that there's a manuscript of the Suta Samhita, as well as a manuscript of a commentary on it. But have either of those manuscripts been translated into English?

What is the correspondence between the khaṇḍas and saṁhitās of the Skanda Purana?

The Skanda Purana is the largest of the Puranas, divided into 7 khaṇḍas and comprising 81,100 verses. There is some difference in the names of the 7 khaṇḍas (according to prevalent opinions). In some there are more stories whereas in some there are lesser. According to one opinion, the names of the 7 khaṇḍas are - Māhéśwara, Vaiṣṇava, Brāhma, Kāśī, Avanti, Nāgara and Prabhāsa. These are also composed of many khaṇḍas. There is a Skanda Purana divided on the basis of Saṁhitās. With reference to this, in the Hālāsyamahātmyam of the Śaṁkara Saṁhitā it is written that the Skanda Purana is divided into 6 saṁhitās and 50 khaṇḍas. The names of these saṁhitās are Sanatkumāra Saṁhitā, Sūta Saṁhitā, Śaṁkara Saṁhitā, Vaiṣṇava Saṁhitā, Brahma Saṁhitā and Saura Saṁhitā. The number of verses in each of these Saṁhitās are 36,000; 6,000; 30,000; 5,000; 3,000 and 1,000 respectively. In this way, even in this version of the Skanda Purana the number of verses is 81,000. Only the first three saṁhitās only the first 3 are available, though it is said that in Nepal all 6 are available. There are commentaries by scholars on the Sūta Saṁhitā. Some call the Saṁhitā version of the Skanda Purana as an Upapurana and some consider it as a limb of the main Purana. Whatever be the case, the Saṁhitās are very important.

Thus the number of verses in both the khaṇḍa version as well as the Saṁhitā version (supposedly) are 81,000 each. The contents of both are also different.

There is no scholarly consensus on the contents of the Skanda Purana. The main reason for this lies in the fact that many texts mention the number of verses of the Skanda Purana to be 81,000. The Prabhāsa khaṇḍa itself states the Purana to have 81,000 verses. This view is supported by the Matsya Purana (Chapter 53). The Agni Purana says there are 84,000 verses.
Further, there are several scattered manuscripts, all of which claim to be a part of this magnanimous purana. It is for this reason that while compiling all these manuscripts, different publications holding different views published different versions, trying to limit the verse count near 81,000. There is one published by Venkateswara Press in which the verse count exceeds 93,000.

It is a fact that various publishers, besides Gitapress acknowledge the presence of both versions, though they don’t include both as part of the same book (most northern ones sell the khanda version). For example the Nag Publishers, Delhi acknowledge the Agastya saṁhitā (another name for the Śaṁkara Saṁhitā), but do not include it as part of the Skanda Puranam sold by them. Thus as of now, in the absence of scholarly consensus, there is little or no correlation between the khaṇḍa version and the saṁhitā version, and are sold separately

There are still many sections such as the Sahyādri khanda, Ayodhya, Srisailam, Kaveri Māhātmya, etc that are not yet included, though they claim to be part of the main corpus.

My opinion is that actually the Skanda Purana is divided on the basis of Samhitas only, each containing various khandas and Māhātmyams. The khanda version of the Skanda Purana is actually to be categorised into their respective Samhitas like Maheshwara khanda (containing Kedara,kumarika, etc) under Shankara Samhita and so on, irrespective of the fact that the number of verses goes beyond 81,000. 81,000 seems to be greatly limiting the scope. Actually all these 7 khandas and Sahyādri khanda etc form a part of some samhita and must be included as such to create a correct Skanda Purana.

I state the below based on this google book in Hindi, this report by Shodhganga (Reference used has been given at the end of the document) and the preface of the Sūta Saṁhitā Mimamsa (this book talks a little about the contents), sold by Gitapress Gorakhpur and the below link in the next part of the answer. 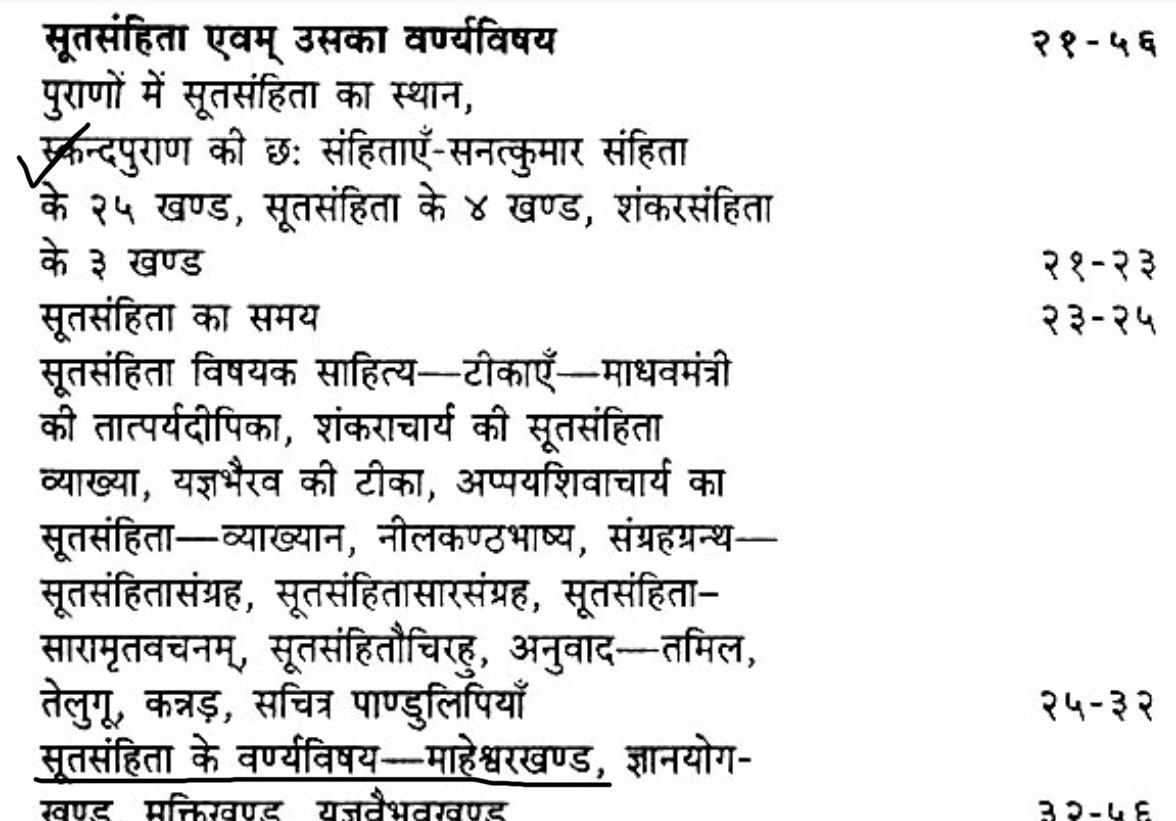 It can be observed from above that there is an Madhavacharya Tatparyadīpikā as a commentary to the Sūta Samhita.

Is there any English translation of the Skanda Purana divided on the basis of samhitas rather than khandas?

As far as concerning an English translation, I don’t know if it’s available. There is an only Sanskrit version of the Sūta Saṁhitā, along with the Sanskrit commentary - Tātparyadīpikā of Madhavacharya. The following are the links:-
https://archive.org/details/SutaSamhita-volume1/
https://archive.org/details/SutaSamhita-volume2/

The description of Lord Shiva as Dakshinamurthi is contained Suta Samhita 3.4 - in the 4th chapter named मोचककथनम् of the Mukti khaṇḍa. The entire chapter is dedicated as such to Dakshinamurthi, however the word Dakshinamurthi appears in verse 45 and 48.

Not the answer you're looking for? Browse other questions tagged puranas translation-request skanda-purana .