Why is Ravan considered a Rakshasa?

Ravana's father was a Brahmin while his mother a Rakshasi. Then why is he considered a Rakshasa, Rather than a Brahmin. Is it because of his actions?

In the famous dialogue between Yama (in form of Yaksha) and King Yudhishthira there is mention about the eligibility to be a a brahmin. The verse goes as follows(Question no-31):

The Yaksha asked,—“By what, O king, birth, behaviour, study, or learning both a person become a Brahmana? Tell us with certitude!”

Yudhishthira answered,-“Listen, O Yaksha! It is neither birth, nor study, nor learning, that is the cause of Brahmanahood, without doubt, it is behaviour that constitutes it. One’s behaviour should always be well-guarded, especially by a Brahmana. He who maintains his conduct unimpaired, is never impaired himself. Professors and pupils, in fact, all who study the scriptures, if addicted to wicked habits, are to be regarded as illiterate wretches. He only is learned who performes his religious duties. Even if he has studied the four Vedas is to be regarded as a wicked wretch scarcely distinguishable from a Sudra if his conduct be not correct. He only who performes the Agnihotra and has his senses under control, is called a Brahmana!”

Thus it is quiet evident that caste is just a function of a character. Incase of Ravana he failed to keep his sense under control and never behaved like a Brahmana.Thus Ravana doesn't inhert the caste of his father. 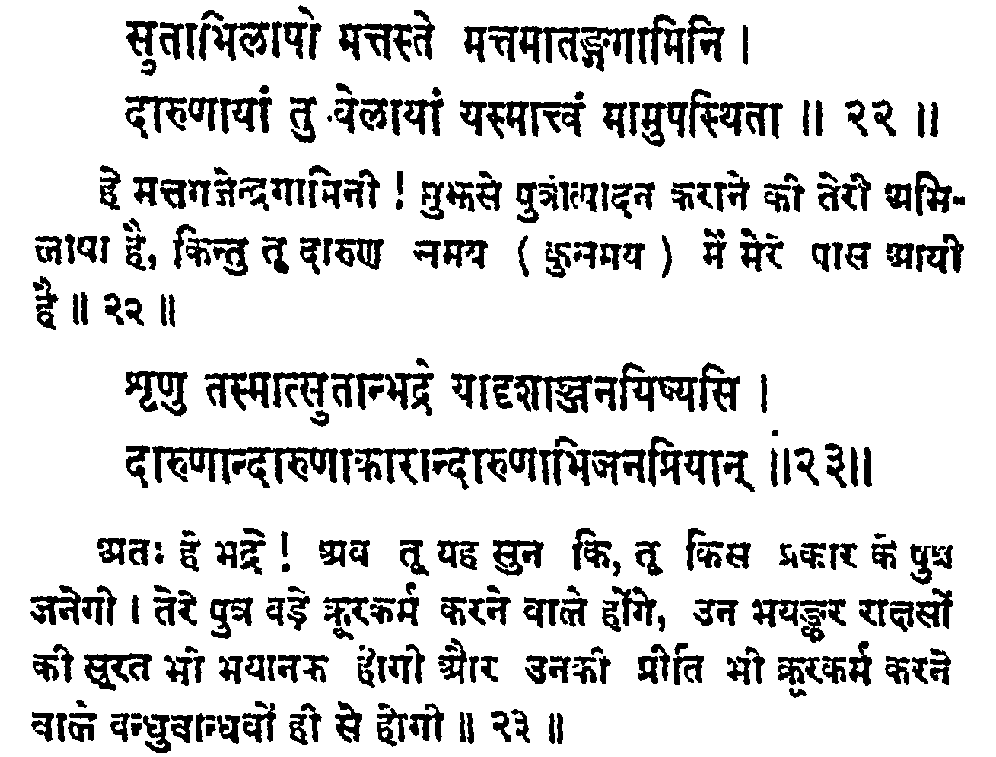 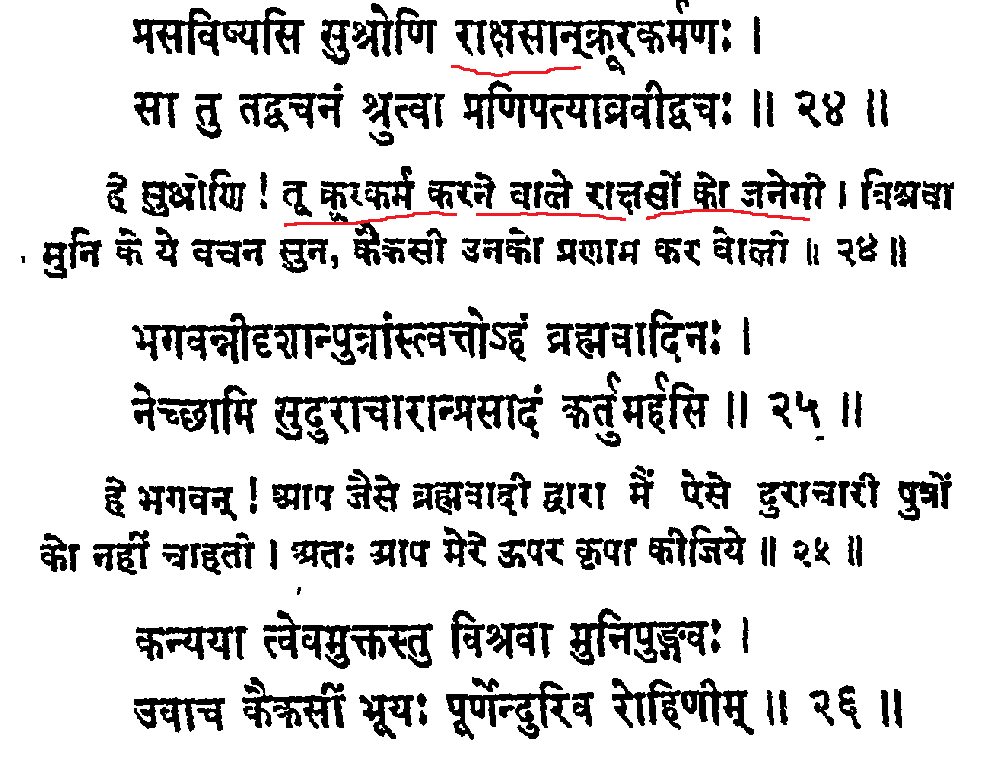 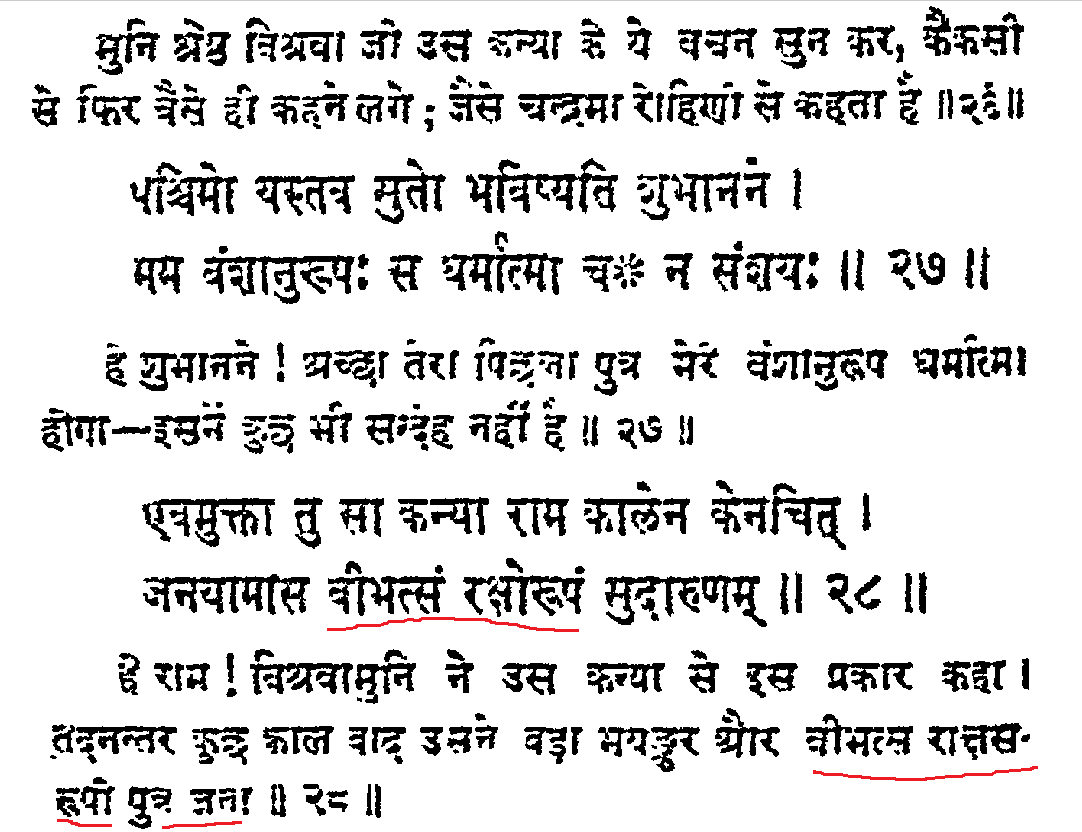 O thou having the gait of a mad elephant, there reigns a powerful desire in thee for having ofspring. Inasmuch as thou hast come to me at this fierce hour, hearken, thou amiable one, as to the kind of ofspring that thou shalt bring forth. Thou shalt, O thou of graceful hips, bring forth terrible and grim visaged Rakshasas delighting in frightful friends, and of cruel deeds.

Hearing his speech, she, bowing down, said, O reverend (ascetic), such sons of terrific ways seek I not from thee that followest the Veda. Therefore it behoveth thee to favor me. On being thus besought by the girl, Visrava, best of ascetics, again addressed Kaikasi, like the full Moon addressing Rohini, O fair faced one, the son that thou bringest forth last, shall be like unto my line, he shall, without doubt be righteous souled.

Having been thus accosted, the girl, O Rama, after a length of time brought forth a very terrible and hideous ofspring having the form of a Raksha (Rakshasa).

Not the answer you're looking for? Browse other questions tagged ramayana caste-system ravana ancestry rakshasa .

16
Who are Yakshas?
7
Why is Nahusha's last name Manava?
1
Is Raavana a rakshasa or a brahmin and how he can be a king too?
1
Sins and parihara for killing Brahmin

10
Who was goddess Sita's father? Why are there multiple stories? Which one should we believe?
24
What is the story of Alambusha, demon son of sage Rishyasringa?
6
Why could not Ravana pick up Shiva's bow during Sita's svayamwar?
4
Who is the Rakshasa named Ravani in Ramayan?
10
Does progeny born out of varNa-SaMkara (intermixing of classes) also derive gotra from father?
4
What was the relationship between Ravan and Tadaka?
3
Any books with Ravana point of view?