ISR says birthdate of Lord Rama is 10th January 5114 BC. What about Kalki avatar?

Note the position of stars at the time of Rama's birth that Valmiki states in Ramayana Bala Kanda, Sarga 18, Shlokas 8-11:

On completion of the ritual, six seasons have passed by; then in the twelfth month, i.e., in chaitra mAsa, and on the ninth day of that chaitra month [April-May], when it is punarvasu nakshatra yukta navamI tithi, i.e., when the ruling star of that ninth day is punarvasu, for which Aditi is the presiding deity; and when five of the nine planets - sUrya, kuja, guru, shukra, shani are in ucCha sthAna-s, namely, when those planets are in ascension in their respective houses - meSha, makara, karkaTa, mIna, tula - rAshI-s; and when chandra yukta guru, karkaTa lagne - Jupiter in conjuction with Moon is ascendant in Cancer, and when day is advancing, Queen Kausalya gave birth to a son with all the divine attributes like lotus-red eyes, lengthy arms, roseate lips, voice like drumbeat, and who took birth to delight the Ikshwaku dynasty and adored by all the worlds, and who is the greatly blessed epitome of Vishnu, namely Rama. [1-18-8, 9, 10, 11]

To summarize, the conditions were:

Also they validated all the incidents like Bharata's date of birth, Hanuman visiting Lanka to find Seeta that time Lunar Eclipse took place. All of these dates were validated and their research concluded that Rama existed in 5114 BC.

Following is the image of planets in Planetorium software when Rama took birth. 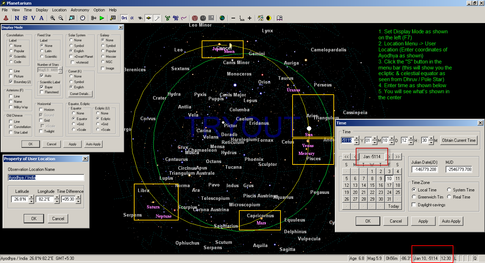 Also they found the date of Mahabharata to be some 3000 BC.

Current year is 2015. So 7000 years before now, Lord Rama existed and you can see the difference between Lord Rama (Treta-yuga) and Mahabharata (Dwapara-yuga) is only 2000 years scientifically. Then why Kaliyuga is lasting from 5000 years? Is this true as per Hinduism?

Also, are locations or arrangments of planets mentioned for Kalki avatar's birth or pralaya in any other purana?

If it is there, can we simulate in planetorium software and find out when Kalki will be born?

In my view the above study went wrong. My opinion on this issue is as follows:

1) According to the Scientific dating conducted by many scholars, The Great War of Mahabharat between the Pandavas and the Kauravas happened in 3139 BC. The Pandavas, after winning the Mahabharat war, ruled Hastinapur for 36 years and 8 months until the beginning of kaliyug in 3102 BC.

3) The story of Srimad Ramayana ends with Sri Rama's coronation as the King of Kosala Kingdom. Sage Valmiki describes in the concluding chapter of Yuddha Kanda that having enjoyed the kingship for ten thousand years, Sri Rama performed a hundred horse-sacrifices. It was described very briefly about the happy life of the people of Kosala kingdom during the reign of Sri Rama.

"All the people were endowed with excellent characteristics. All were engaged in virtue. Rama was engaged in the kingship thus **for Ten thousand years."

4) If we take 3102 BC as the basis for the Mahabharata dating, then at least 10,000 years are to be added, assuming that Mahabharata immediately followed Sri Rama, to 3102 BC for getting the age of Sri Rama. Thus, we will get 13,102 BC. That means atleast 15,000 years back Srimad Ramayana might have written.

This was the available calculation.

Not the answer you're looking for? Browse other questions tagged mahabharata ramayana history rama kalki .

0
What is the year when Lord Rama was born?
41
Did Ramayana occur 1.6 million years ago?
24
When will the Kalki avatar be born?
14
Ramayana ➡ Mahabharata: 31 Ikshvaku Kings. What was the (average) age of those kings?
3
What was the age of Hanuman when Bheema met him?
6
Lord Shree Rama ruled his kingdom for 11000 years?

21
What is the story of Kalki (tenth avatar of God Vishnu)?
16
Did Rama know that he was Avatar of Lord Vishnu?
4
What is the exact birthdate of Kalki avatar going to be?
7
What is Adi Shesha's role during Kalki avatar?
5
Anomaly in birth chart of Sri Rama? Kindly clarify
6
Did Ravana have knowledge about Rama being an avatar of Vishnu?
11
Does Shri Rama return in the month of Chaitra or Vaishakha?