Do we have any information about other wives (except Riddhi, Siddhi) and grandsons of Lord Ganesha mentioned in any texts

I recently came across a WhatsApp message which showed that there is a temple in Indore, India called Shri Shri Vidya Dham which is the only temple that has idols of full family of Lord Ganesha. Full family here means:

Here is a picture of the temple: 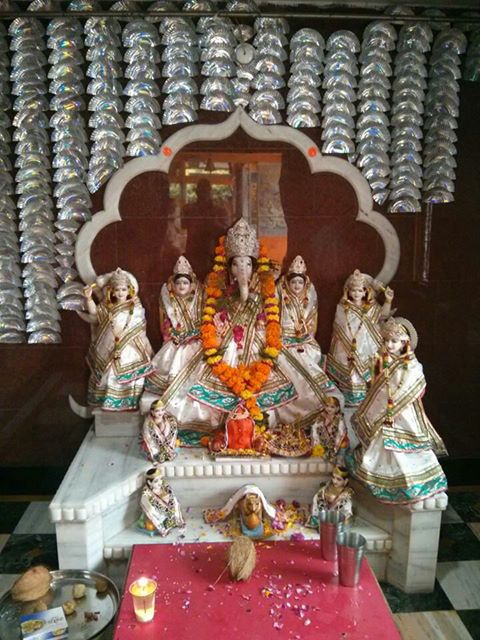 I have already heard and read about Lord Ganesha's wife Riddhi and Siddhi and His sons Shubh and Laabh, but I have not heard of Tushti, Pushti, Aamod and Pramod. I wanted to ask whether we have any scriptural reference for them and any stories about them like who were these ladies and how did they got married to Lord Ganesha. Also did they along with Aamod and Pramod have any roles/responsibilities.

As far as I know, Tushti, Pushti, and Shri are amsas of Mahalakshmi, who reside in Vaikuntha, and not Ganesha's wives. This is because when Krsna gives his darshan to Akrura in Srimad Bhagavatam, he is being served by his energies, which include, Sri, Tushti, Pushti, Kanti, Gir, Kirti, Ila and Urja. http://www.vedabase.com/en/sb/10/39/53-55 So I don't suppose they can be Ganesha's wives.

Amoda and Pramoda are among the Senanayakas of Mahaganesha who assisted him in the battle against Vishanga, when Devi Lalitambika was engaged in killing Bhandasura's forces, according to Lalitopakhyana. Senanayakas refer to six commander in chief's of Ganesha's army, who are the partial avataras of Ganesha. So I don't think that they can be his grandchildren.

In the Devi Bhagvata Purana,the goddess Pushti is mentioned:

“Pustî” (nourishment) is the wife of Ganapatî. All in this world worship this Pustî Devî. Without this “Pusti”, women or men alike all become weaker and weaker.

Tushti is also mentioned but she is described as the wife of Anata Deva.

9
Who are the wives of Lord Ganesha?
1
Where are the temples for Lord Ganesha along with his wives?
1
If Lord Ganesha is married then why is he worshipped as a bachelor.....?

9
Who is sage Ganaka, the seer of so many mantras to Ganesha?