Krishna said Those who are devotees of other gods and who worship them with faith actually worship only Me, O son of Kuntī, but they do so in a wrong way.

My Question is, if devotees of other gods worship them with faith actually worship Lord Krishna, according to Bg 9.23, why does verse Bg 9.25 say those who worship demigods or others take birth among them and not live with Lord Krishna?

Please clarify if I am wrong in understading these two slokas.

Krishna says that he who worships other gods worships him (i.e. Krishna), now why does He say so? because he (Mahavishnu) is the supreme godhead and all the other gods are his ansh(part) or have been originated or created by him.

So if they worship him by making him look like any different god it is okay they will be blessed because they are ultimately worshipping Krishna the supreme being.

Those, however, who are devoted to Indra and other divinities, who rely on the three Vedas alone, and who, possessed of faith, worship Indra and other divinities — they too worship Me actually in the light of the truth that all existing things constitute My body and have Me for their selves. In the light of this principle, terms like Indra denote Me only. The worshippers of Indra and other deities therefore worship Me only, in ways not sanctioned by the Sastras. They do not worship Indra and other divinities with a proper understanding of the place of these deities in the light of the Vedanta texts. An example is ‘Wherein (i.e., in the Supreme Self) the sacrifices known as the Caturhotri attain their fulfilment through the divinities’ (Tai. Ar., 4) etc. These texts say in what way these forms of worship apply to these divinties. For all Vedanta texts lay down that the Supreme Person alone is to be worshipped directly when they enjoin the worship of Indra and other divinities, as they form the body of the Supreme Person. The meaning is that in the Caturhotri sacrifice like Agnihotra, the full moon and the new moon sacrifices etc., it is the Supreme Self only that is worshipped, as He abides as the self in Indra etc., who are the ostensible objects worshipped in these sacrifices by which these worshippers obtain their fulfilment through them. Therefore, the votaries of the three Vedas do not understand that these rituals form the worship of the Supreme Person and that He alone is to be worshipped. As they do not do so, they become experiencers of limited results, and they are again liable to fall into Samsara.

It states that when a person worships a demigod he will be born with that demigod or whatever he is worshipping. Now consider for example that a person worships kal-bhairava (in some forms bhairava requires alcohol and meat as offerings) so if you worship demi-gods with such qualities you will tend to posses such qualities which in turn affects your karma because you are not going towards reality i.e. away from material pleasures which is where ultimate truth lies.So worshipping demigods is not wrong but just sticking to a demigod and considering it bramhan even though we all know the reality that Krishna is supreme, it is totally foolish and sensless. What's more foolish is that you are just taking material aspects(like meat eating, smoking weed, drinking,sex etc) of worships of demigods rather than seeing the qualities or making them tool for reaching the ultimate goal.

Supreme Bramhan in its pure form is Shri Hari Vishnu if you worship him you will attain liberation or Moksha.

The term ‘Vrata’ in the text denotes will, intention or motive. Those who intend to worship gods, like Indra and others with the resolution, ‘Let us worship Indra and other gods by ceremonies like the new moon and full moon sacrifices’ — such worshippers go to Indra and other gods. Those who intend worshipping manes, resolving ‘Let us worship the manes through sacrifices,’ — such worshippers go to the manes or others resolving — ‘Let us worship the Yaksas, Raksasas,’ Pisacas and other evil spirits’ — they go to them. But those who, with the same rites of worship, worship Me with the intention, ‘Let us worship Lord Vasudeva, the Supreme Self, whose body is constituted of gods, the manes and the evil spirits’ — they are My worshippers and they reach Me only. Those who intend worshipping gods etc., attain gods etc. After sharing limited enjoyment with them, they are destroyed with them when the time comes for their destruction. But My worshippers attain Me, who has no beginning or end, who is omniscient, whose will is unfailingly effective, who is a great ocean of innumerable auspicious attributes of unlimited excellence and whose bliss too is of limitless excellence. They do not return to Samsara.

P.S.: If we analyze according to Philosophical Aspect, then Shrimad Bhagwad Gita belongs to Vishishta Advaita Philosophy, since it is a Pancharatra Agama which was revived by Shri Krishna in Battlefield of Kurushetra.

9.23 Even those who, being devoted to other deities and endowed with faith, worship (them), they also, O son of Kunti, worship Me alone (though) following the wrong method.

There is a word "avidhi purvakam" in the verse, which means "following wrong method". Here by wrong method it means, a worship in which deities are worshiped in their limited aspect and not as Supreme Brahman.

Yet, even such worship reach Supreme Brahman as Brahman is Atman/Self of even the deities. The term "Me" refers to Para-Brahman and not to limited aspect of Krishna. So, verse 9.23 is saying that, if a person worships the deity in their limiting aspect, it is a wrong method of worship and hence, the results attained will also be limited and lower than the result attained by worshiping Para-Brahman.

9.24 I indeed am the enjoyer as also the Lord of all sacrifices; but they do not know Me in reality. Therefore they fall.

Hence, if a person had performed worshiped knowing the real nature of Brahman as the Self of all, then it would have helped a person to purify his mind and slowly attain ultimate Moksha. But, because, a person does not understand Brahman's true nature, the result obtained from such a worship is lesser or lower. Here, the term lower is only with respect to the ultimate goal of Moksha.

So, what results do people get who worship deities in limited aspect? Krishna answers this in verse 9.25:

9.25 Votaries of the gods reach the gods; the votarites of the manes go to the manes; the worshippers of the Beings reach the Beings; and those who worship Me reach Me.

That is, because a person worships a limited aspect, be it a deity or a pitr or any other beings, the result of such worship is that it takes the devotee to the realm of those deities or pitrs etc. But, after spending the time in those realms (till the time the fruits of worship exhausts), the person returns back to Manushya loka/Physical realm.

On the other hand, those who worship Para-Brahman, he will slowly attain chitta-shuddhi and with practice of Vichara (Self-Enquiry), they will attain Atma-Jnana as well and become Jivanmuktas.

So, there is no contradiction. You may like to read this: A deity can either be God or god or both

Krishna said "Those who are devotees of other gods and who worship them with faith actually worship only Me, O son of Kuntī, but they do so in a wrong way."

Commentary: Those who, in the process of worship, use different names or forms, they also worship the highest Lord. This is because everything that exists that could be worshiped is included in that Brahman. However, the difference between these two types of worship is that those who worship by using different names, etc., worship according to the different injunctions(avidhi). The word avidhi simply means different types of injunctions. Therefore the Lord said that he, who is of the nature of the highest Brahman, could be worshiped through various kinds of injunctions.

Commentary: Even those kinds of people- who under the influence of a dualistic philosophy worship other gods and treat them as different from their own self and as different from the nature of the Brahman - worship only the highest Brahman, who is identical with their own ātman. However, these kind of people follow wrong injunctions because their worship includes within itself the notion of duality. Therefore the Lord said :"They don't know me who is their own self, who is the real enjoyer of sacrifices and who has taken the form of that particular God (that they worship). Therefore, such people deviate from my path". In this context, the word deviate means that they go to other gods because they are devoted to them. Those who, on the other hand, know the Lord as undivided reality worship only him even when they sacrifice to other gods or to their ancestors. Thus, we can conclude that all those who worship the highest Brahman, attain the Brahman.

Commentary excerpts from the great Abhinavgupta. 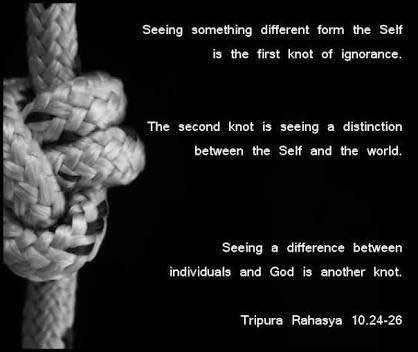 Not the answer you're looking for? Browse other questions tagged krishna bhagavad-gita .

2
What is the meaning of worshiping a demigod? And is it bad to worship a demigod? [BG 4.12]
8
Bhagavad-Gita: As It Is - version without interruptions?
2
What is the Gita verse for "Worshipping demigods fulfils material desires, but for Moksha, one should worship Me."

9
Was the time temporarily stopped by Lord Krishna during Geeta upadesham?
3
What is the philosophy of Yatharth Geeta?
9
Does the Bhagavad Gita actually have 745 shlokas?
4
Where exactly is the Bhagavad Geeta quote that the "ultimate aim of life is to attain moksha" found?
3
Where this statement "I know how to control the universe" Mentioned in Bhagvad Gita?
2
Why does Krishna say worshipers of other deities do not reach him, although they are also only worshiping him indirectly?