What is the story of Kashtbhanjan Hanuman Dev idol at Sarangpur?

What is the story of Kashtbhanjan Hanuman Dev idol at Sarangpur(Gujrat)?

Who is the female under Lord Hanuman's foot and why is Lord Hanuman crushing his teen in the image? 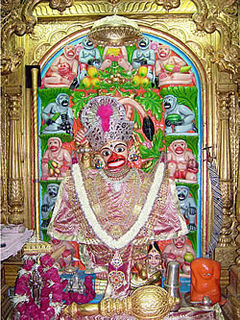 According to their main website and a video which i have seen and is available on youtube has the full story of Sarangpur Hanumanji, please see below for the link.

According to the main website it states that "The image of Hanuman was installed by Sadguru Gopalanand Swami on Ashwini vadi pancham".

According to youtube video story, Sadguru Gopalanand Swami had come to visit a village called Botad (roughly about 11.3KM away from sarangpur). A bhakt from sarangpur named Darbar shree Wagakhachar came to see Gopalanad Swami.

Gopalanand Swami after seeing Wagakhachar swamiji asked if everything was ok? To which Wagakhachar replied people in Sarangpur are very upset, from last 3 years there hasn't been any rain and because of that villagers don't have enough people to even call sadu sants for satsang. Listening to this Gopalanand Swami started to think and said "Wagakhachar don't worry i will get kashtbhanjan murti installed in a temple from which all the kasht will go away", straight a murtikar named Kanji Mistry was called and was given a design of the murti which needed to be created. After the murti was created Golpaland swami according to shastra put life into murti. Video than carries on stating that to get life into the murti Gopalanand swami looked into the eyes on Kasthbhanjan Hanumanji eyes and due the powers swamiji had the murti started to shake.

For the second part of your question female under the feet, i am not 100% sure however wikipedia does state "The image of Hanuman here is a stout figure with a handlebar moustache, crushing a female demon under his foot and baring his teeth"

I would also like to add another video which i found on facebook please have a look at it..

The Kastbhanjan Temple of Lord Hanuman in Sarangpur, Gujarat is a unique shrine as it houses the idol of Lord Shani at his feet. What is more surprising is that Lord Shani is depicted in a female form here in this temple. There’s an interesting story behind such depiction of the two gods here.

Legend has it that once Lord Shani was being too testing for his devotees and was making them suffer. Distressed devotees therefore prayed to Hanuman to intervene and help. When Hanuman saw their condition, he got angry at Shani and decided to punish him.

When Lord Shani came to know of Hanuman’s intentions, he started finding out ways to get rid of Hanuman’s anger. This was when it struck to him that Hanuman is a ‘brahmachari’ and can never hurt any woman. He transformed into a woman, and surrendered himself at Hanuman’s feet, asking for forgiveness.

Hanuman forgave him, and since then Shani is worshipped in this temple in the female form.